DNA phenotyping is part of a new wave of investigative tools for law enforcement. Critics dismiss it as “science fiction.” 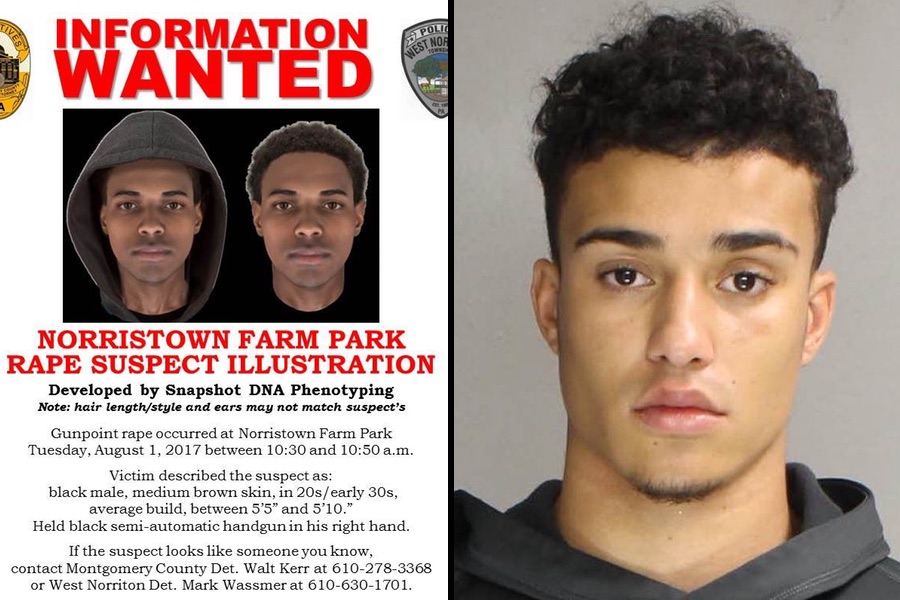 When Montgomery County detectives began investigating a violent sexual assault in 2017, they had few leads. Detectives recovered a sample of the alleged perpetrator’s DNA, but it failed to match any DNA in criminal databases. The description of the suspect was limited. In the past, those two factors might have signaled the end of the investigation. But the Montco DA decided to try a new technology called DNA phenotyping, a process using genetic information to create a facial sketch of what a suspect might look like in real life.

The sketch, made by a Virginia company called Parabon NanoLabs, was released to the public in January 2018. The Montco DA’s office said it disseminated the image of the suspect “in the hopes that someone might recognize him and contact detectives.” But while the computer-generated mug shot produced multiple tips, none produced any legitimate leads.

Parabon’s sketch may not have been useful, but Montco investigators had a second futuristic tool at their disposal. Detectives used what’s known as “genetic genealogy,” plugging the suspect’s genetic information into a DNA database in order to determine his distant relatives — the same way police caught the Golden State Killer in 2018. The Montco police turned up a few hits, and after interviewing those relatives they honed in on a man named Mason Hall. Then, police had a stroke of good fortune: They learned Hall had recently been a suspect in a different criminal case, and had left DNA evidence there, too. The samples matched, and Hall was arrested on October 18, 2019. (He is scheduled to be arraigned on December 11th.)

Between the twin technologies of genetic genealogy and DNA phenotyping, law enforcement seems poised for an investigative revolution, not unlike when basic DNA identification was first developed in the 1980s. But while few geneticists have any qualms with genetic genealogy on the scientific merits, it’s a different story with phenotyping. Still, that’s not stopping other police departments from giving the sketches a shot.

The Philadelphia Police Department has hired Parabon to perform phenotyping on one current case, and it’s considering others to submit for genetic genealogy and DNA sketches as well. The Pennsylvania State Police, meanwhile, have used both phenotyping and genetic genealogy in two cold cases, one of which was solved thanks to the genealogy. And while the district attorney’s offices of Bucks and Chester counties have yet to deploy this new wave of genetic technology, neither is writing off its use in the future, either. 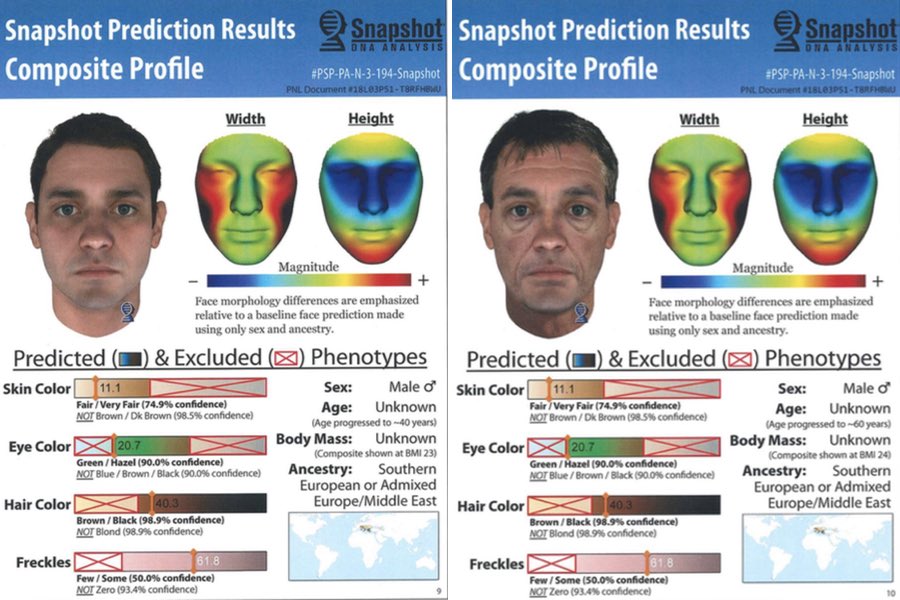 The trouble with DNA phenotying arises because, despite all the advances in genetics, scientists still don’t really understand the way genetic code determines physical traits — especially with something as complicated as the human face. Even for the best-understood traits, like eye color, there’s margin for error. “With eye color in European populations, about 90 percent of the people with the correct genotype for blue eyes have blue eyes,” says Mark Shriver, a geneticist at Penn State. “There’s another 10 percent of people with the blue eye genotype who do not have blue eyes. So you’re still going to make some errors even with the strongest single locus test.” The accuracy dwindles further when you start considering traits like facial shape, or populations whose genetics are less well-understood. Phenotyping also can’t account for a suspect’s age or weight.

Parabon hedges by including confidence intervals in its phenotype analysis, but its sketches extend well beyond the firm ground of eye color and skin tone.  The company says it uses thousands of genetic markers to create its likenesses. But Shriver, who once worked with Parabon on an early project, says he got turned off from the company when he felt “they were quite focused on selling tests and not doing science quality tests.” Fellow scientists often critique the company for not submitting its full methodology for peer review, either. (A spokesperson for Parabon wrote in an email that the company is “fully committed to the science” and that “we maintain our exact methods as a trade secret to protect our intellectual property.”)

Parabon has only been offering its DNA phenotyping service since 2015 and maintains that its results (on its website, it proudly lists composite sketches that closely align with real people) speak for themselves. According to Parabon, police departments — most of which are hiring the company to help solve violent crimes — have closed 76 cases thanks to its phenotyping and genealogy options. Still, the ACLU has called on departments to stop using DNA phenotyping in particular, calling the technology the stuff of “science fiction.”

The strangest part of Parabon’s facial sketch business is that, according to a spokesperson, the company’s “DNA phenotyping is not intended for individual identification,” but rather to weed out the pool of potential suspects. Yet this would seem fundamentally incompatible with the function of a sketch — no one looks at a police sketch and thinks about who it doesn’t look like. And regardless of what Parabon says, police are certainly using these CGI sketches they way the always have used conventional ones: blasting them out to the public and asking for tips.

That could eventually prove problematic. Even if you accept the premise that Parabon’s sketches are mostly accurate, the images all have a certain lowest-common-denominator universality to them. Hans Menos, executive director of the civilian oversight Police Advisory Commission in Philly, says that’s a real concern. Phenotyping is “clearly useful in some respect,” he says, “but it can lead to racial profiling.” (In China, this may already be happening.) 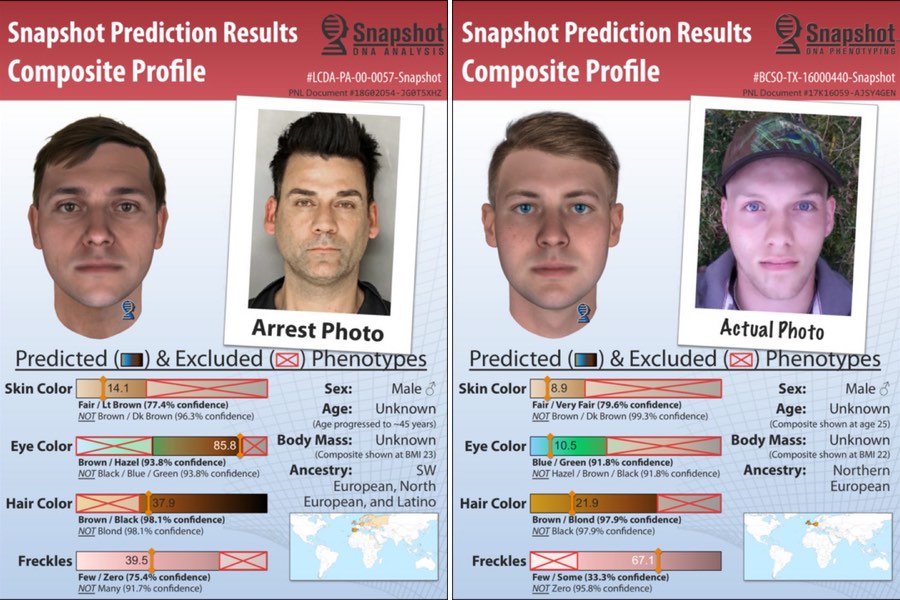 The solution to Menos is for departments to have a codified set of best-practice regulations. (Parabon, for its part, does provide an hour-long training to departments as part of its facial sketch package, which costs $1,680. But one wonders how much departments actually absorb in these meetings, if they just go on to send out the sketches in search of a positive ID anyway.)

In Philly, the Police Advisory Commission is ideally supposed to play a role in developing these sort of policies when it comes to new policing technologies. But Menos wasn’t even aware that the Philly PD has used DNA phenotyping. Is that concerning?

“Yes,” says Menos. “Is it typical? Also yes. They are not apt to volunteer information.”

The burden of appropriate use of DNA phenotyping ultimately falls on police, says David Kaye, a Penn State emeritus professor of law. “In an ideal world where police understand the limitations of what they have, they should use all the information they can get,” he says. “Paternalistically, if we doubt that and think the investigations are going to go off in the wrong way, then we’ll want better, more foolproof techniques.”

Which is to say that for all the scientific discourse surrounding Parabon and DNA phenotyping, perhaps the focus on the company is misplaced. Equally important here is the police. In phenotyping, they’ve been given a powerful new investigative tool. The question is whether you trust them to wield it.