Pretending that a predominantly white institution is “HBCU-ish” gets you nowhere. But you can leverage your own unique situation in a city that’s a majority of color to make things better for the surrounding community. 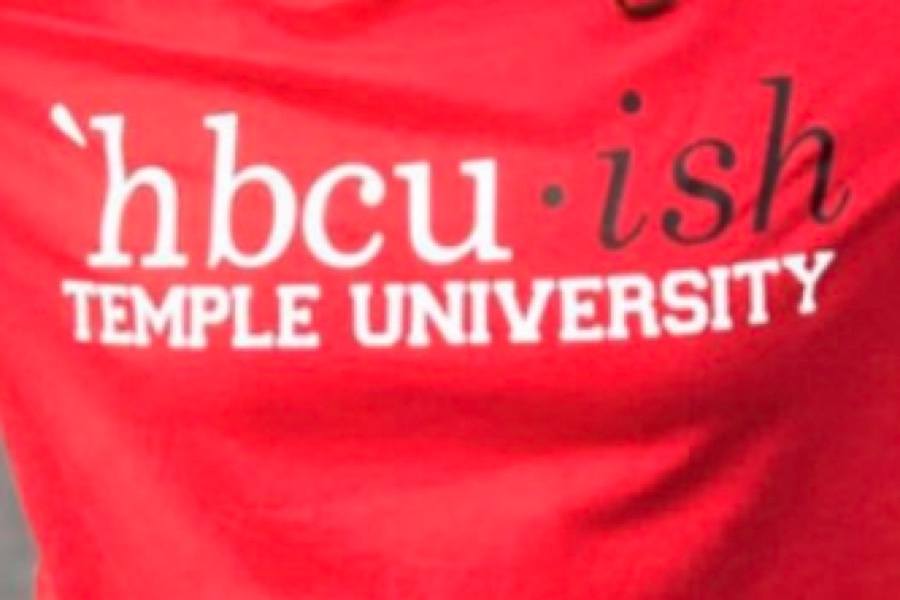 There’s been an ongoing claim among some Black students at Temple University that their campus life mirrors that at historically Black colleges and universities (HBCUs). The large presence of Black fraternities and sororities, the number of Black social events, and the school’s location in a Black neighborhood in a majority-minority city may superficially support the comparison, but make no doubt about it: Temple is a predominantly white institution (PWI), with an undergraduate student population that is more than 55 percent white and less than 13 percent Black.

So when I see my fellow PWI students try to suggest something more, it makes me go “Y’all, let’s not.”

Over the weekend, while several HBCUs were celebrating their homecoming festivities, Temple students decided to join in on the fun at their own homecoming with a student-created T-shirt suggesting that the PWI was “HBCU-ish.” The social media backlash was fierce.

The Black History of Temple University and it’s neighborhood N. Philly is deep and rich but yea we deserve to be dragged or checked for this.

When I was there it was more TU is black af or a wannabe HBCU. But THIS is too far. It’s messed up b/c there’s an HBCU near TU. https://t.co/IhdyD0SVjD

As someone who teaches at an actual HBCU — @LincolnUofPA — which is 40 miles west of @TempleUniv, this is laughably stupid. Temple ain’t remotely close.

Never mind there are 3 other actual HBCUs (@CheyneyUniv, @MorganStateU, & @DelStateUniv) within 100 miles of Philly. Stop it. https://t.co/fpxQRUssW3

The message of the comments was consistent: Temple isn’t even close to an HBCU. (And, it must be said, demographics and history agree with them.) As someone who attended a PWI as an undergraduate (Penn) and is enrolled at another one for graduate work (USC), I would never pretend that my experiences mirror those of students at HBCUs.

My rationale for attending a PWI was determined by a zero-debt financial aid opportunity and a personal interest to be taught at a liberal arts Ivy League institution, but I have several friends and family members who attended HBCUs and didn’t experience the level of institutional racism I faced during my undergraduate years. Being educated on campuses where diversity and inclusion isn’t a talking point but a reality has allowed them to experience a Black cultural exchange that can’t quite be duplicated at a college that isn’t an HBCU.

That being said, this doesn’t mean that Black students attending PWIs — and the institutions themselves — can’t leverage what is unique about them and their situation to help improve the Black neighborhoods they inhabit. Black residents in North Philadelphia have long clashed with Temple over gentrification and displacement concerns. Black Temple Owls can continue to work alongside the community in putting pressure on their institution to act in the best interest of nearby residents.

The same can be said for Penn students in West Philly, where decades of the displacement of Black residents show no signs of stopping. I support the many current students, faculty, and alumni who are calling on the university to pay PILOTs (Payments in Lieu of Taxes) after years of having its billions of dollars in real estate holdings go untaxed. As an alum who currently lives around University City, I can’t ignore Penn’s role in furthering inequity among the Black residents who live nearby.

Black students at Temple, Penn, and other PWIs don’t have to falsely suggest they are “HBCU-ish” to be a part of the broader Black community. One could even argue that the power and resources on tap at PWIs can have a greater effect in their Black neighborhoods than those surrounding HBCUs. The student wearing that now-infamous Temple shirt probably wasn’t considering institutional white privilege and capital when comparing the university to an HBCU — but recognizing those particular distinctions is the first step in making a greater difference.