As part of a worldwide movement, students are set to march against global warming at City Hall on Friday. Unlike in New York City, they’re doing so without permission from the school district. 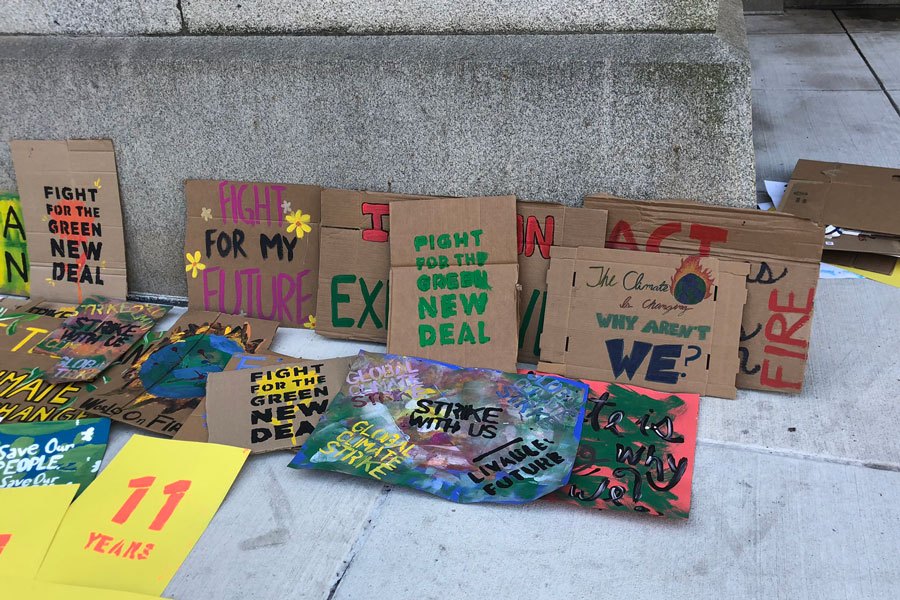 Signs set out in preparation for the climate strike in Philadelphia. Photograph by John Corrigan

All the Greta Thunbergs of Philly will skip school on Friday to hit the streets in protest as people around the world take part in a youth-led global strike against climate change.

One (small) problem? The School District of Philadelphia says it won’t allow students to skip classes to participate in the demonstration happening at City Hall — unlike in New York City, where kids have been given the green-light to strike for the day.

While the Philly school district supports “our students’ rights to self-expression in response to their growing awareness of social issues,” students “who leave the building for non-school-sponsored events will be marked absent” on Friday, Philadelphia school district spokesperson Megan Lello said.

At least 100 countries are taking part in the global climate strike, which comes three days before the United Nations’ 2019 Climate Action Summit in New York City.

The Philly demonstration is set to begin at 11 a.m. on the north side of City Hall. Organizers — which include Climate Strike Pa., Sunrise Movement in Philadelphia, Youth Climate Lobby, 350 Philadelphia and Fossil Free Penn — are demanding a “just transition to a renewable economy” by 2030.

Youth and allied adults are starting to gather here in Philadelphia for the #ClimateStrike #StrikeWithUs #Philly pic.twitter.com/ngdL0VQ80i

Lello said the school district suggests that instead of taking part in the massive, symbolic and historically significant moment, students express interest in organizing school-sponsored events to faculty in an effort to promote their voices “in a safe and supportive way.”

Of course, we wonder: Is it really a protest if it’s sanctioned — and if students are being goody two-shoes about it?

A colleague argues that the point of protesting is to incur some sort of consequence, only to decide to do it anyway because your morals tell you to. (His wording.) By that logic, maybe it’s more badass for Philly students to skip school despite repercussions — because they’re just so vehemently opposed to global warming and sea level rise — than it is for New York students to protest when they’re allowed.

Students leading the march in the Philadelphia School District seem to disagree, though. Vyshnavi Kosigishroff of Pennsylvania’s Youth Climate Lobby told WHYY that the school district’s decision “illustrates ignorance and apathy towards the students’ wellbeing,” and that “non-violent actions like strikes are fundamental to the creation of change, and our schools should be encouraging students to take initiative of their futures.”

City Hall is filling up for the Philly #ClimateStrike pic.twitter.com/eGqyvnjo1y

Either way, Philly’s climate strike will go on on Friday — and it looks like plenty of students will use one of their 18 annually permitted absences to be there. Nearly 800 people have said they will go to the event on Facebook, while more than 1,500 have said they’re interested. You can find more information right here.