The Beautiful Weirdness of Philly, One House Picture at a Time

The Twitter bot Every Lot Philly, which pairs government real estate data with Google Maps images, is relentlessly documenting every piece of property in the city. The results are occasionally sublime. 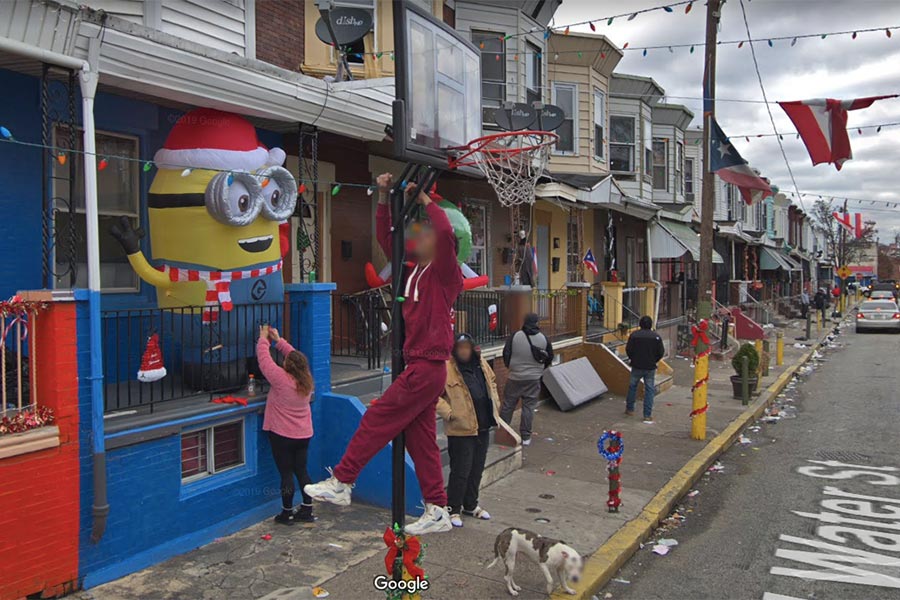 A street scene featured on Every Lot Philly. Photo via Google Maps

John Ricco describes the scene like he was there.

“There was some typically narrow Philadelphia block, where everyone’s just hanging out on the street. It’s Christmastime,” says Ricco, an economist at Wharton. “There’s a Minion inflatable on someone’s porch, and you can see someone trying to hang Christmas lights around it. But also, there’s someone dunking on a basketball net.”

Ricco stumbled on the street scene — on North Water Street in Fairhill — not while walking around the area, but while scrolling on Twitter. @EveryLotPhilly, a Twitter bot that Ricco launched in 2016, had tweeted out the image (a screenshot from Google Street View) as part of its intentionally monotonous but sometimes chaotically beautiful project: to post a photo of every single parcel of land in Philadelphia.

“I’ve told people — my normal friends — about this,” Ricco says. “Like, ‘You know, I programmed a robot on Twitter that shows every single house in the city.’ And they’re like, ‘Why?’ It isn’t immediately obvious.”

Ricco contrasts his so-called “normal” friends with the account’s followers, many of them self-proclaimed urbanists who take pleasure in dissecting a building’s form when it appears on Every Lot Philly: Why does this house in North Philly have a wrought-iron balcony? Does this new construction in Point Breeze really need five garages? And did you see that cobblestone street up in Germantown? My god, is it to die for.

Ricco coded the bot using an open-source algorithm originally written by urban planner Neil Freeman, who started the Every Lot craze with accounts for New York, Chicago, Los Angeles, and San Francisco. These original four accounts and their spinoffs in cities like Philly all follow a similar form: Images are automatically posted, in order by tax ID number, every 10 or 20 minutes.

Jon Geeting, one of the original co-founders of Philly urbanist PAC 5th Square, posits that creative projects like Every Lot Philly weren’t feasible before a change in city policy earlier in the decade. “The culture has shifted to open data since the beginning of the Nutter administration,” says Geeting, referencing city initiatives like the 2012 Open Data Policy, which made previously private data sets publicly available.

Similar projects like @EveryLanePhilly, which posts every bike lane in the city, and @phl_abatements, which posts an image of every property in the city that makes use of the 10-year property tax abatement, are also products of this shift. But unlike those accounts, which both have a specific policy agenda (the former to highlight Philly’s paltry bike infrastructure, the latter to highlight the cost of tax-abated development), Every Lot Philly has a more universal goal.

Ricco thinks the account can be a tool for all Philadelphians, many of whom never venture outside of the neighborhoods they already know well, to see the city. “Watching a Twitter account post pictures of houses is not the same as seeing your own city,” he says. “But in terms of feasibility, I’m not going to be able to walk down every block in Philadelphia.”

Geeting agrees, pointing out that “there’s a lot of blight which people aren’t always looking at.” With Every Lot Philly tweet, though, followers see a slice of the city unfiltered.

And the beauty of Every Lot Philly is just that: Its reach is so broad that you never know what might come up. A man in North Philly walking his dog on a winter morning. A house with the words “boogie nights” inexplicably graffitied on its porch. A girl in catholic school uniform talking to her crossing guard on a South Philly corner, the street’s red-brick façades lit up by the afternoon sun. That’s Philly, now immortalized on Twitter for all to see.

every lot philly is my favorite thing. philadelphia is such a weirdo charming ugly genuinely beautiful surreal place pic.twitter.com/6E2Zxgv7Ul