The Best Thing That Happened This Week: Stormy Weather in Washington, D.C.

Could rain delays be what tips the boat on climate change? 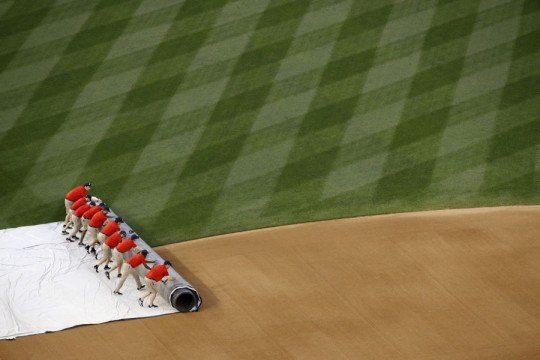 Keep your climate change away from my baseball! Grounds crew members roll a tarp over the infield on Tuesday, June 18th, in Washington. (AP Photo/Patrick Semansky)

If you settled in to watch the Phillies play the Nats on Monday night — scheduled game time: 7:05 — we hope you had at least a six-pack in the fridge, because you got to imbibe three hours of rain-delay drivel before the game was finally called at 10 p.m.

If you thought that was fun, there was more to be had on Tuesday, when the second game in the four-game series was also rescheduled for rain, after a two-hour wait.

All that sitting around and all that beer got us thinking: No one in the world is more passionate, devoted and ornery than Philadelphia’s sports fans. (We took first and second places in this GQ poll.) So — what if we could harness some of that awesome, vitriolic hatred and channel it for good?

After that series with the Nats — the heavens also opened toward the end of Wednesday night’s loss — even the most oblivious Phils fan has to have noticed that the weather’s been — well, freaky. Said fan may have a hard time getting worked up over landslides in Japan or heat waves in India or Himalayan glaciers melting. But hey — we’re talking Phillies here, and the world’s worst fan base subjected to two cancelled games in a row. (Seriously, for how many hours can we be expected to sit through taped panel discussions starring nostalgic geriatric players? No wonder “How long can an MLB game be rain delayed?” was trending on Monday night.) And last year wasn’t any better; 2018 broke records for MLB games delayed or postponed because the weather sucked. Sure, let the polar bears starve, the monarch butterflies die out, and tigers teeter on the edge of extinction. But when you start messing with baseball, you Trumpian climate deniers, we’re coming for you.