Real estate agent Anda Franc has been accused of stealing a $2,000 necklace from a Radnor Township jewelry store. She also seems to have gotten a blowout just before police booked her. 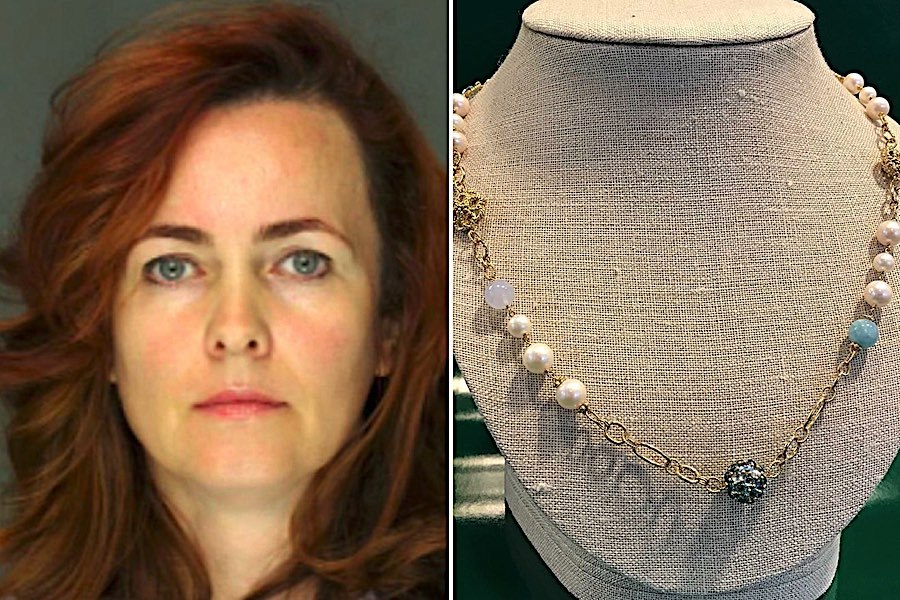 There’s a sad Internet subculture of folks who like to collect really bad mug shots of people who look evil, creepy, or just completely inebriated. But in suburban real estate agent and recent arrestee Anda Franc’s mug shot, she appears to have just stepped out of a salon.

Police announced on Friday that the 45-year-old King of Prussia woman had been arrested in connection with a May 11th jewelry theft at Little House Shop in Radnor Township.

On May 13th, store manager Jennifer Justice (yes, her real name) noticed that a $2,000 necklace was missing from a display inside the shop. The manager reviewed store surveillance footage and traced the loss of the necklace back to Franc’s visit two days earlier.

Radnor Police released the following video in an effort to track down the perpetrator:

According to police, the suspect in the video took the $2,000 piece from the store and then fled in a white Mercedes SUV.

As happens so often these days, it appears that the Internet cracked the case. Police credit social media users for identifying Franc as a suspect.

Radnor Township detective T.J. Schreiber went to Franc’s King of Prussia home and knocked on the door. He explained to Franc that “numerous” tips pointed the finger at her, and she allegedly admitted to Schreiber that she did indeed poach the jewels from the shop. Police say that Franc went upstairs and returned with the necklace in question, which has been returned to the store.

Franc has been charged with felony-level theft and receiving stolen property.

And it turns out that this is not Franc’s first run-in with the law.

In 2012, she was accused of stealing a $3.99 bag of pretzels from a Publix grocery store in Florida, where she was residing at the time.

That probably wouldn’t have been a big deal, but when she was confronted by a Publix security guard, she allegedly bit the guard, breaking her skin. The guard tried to get her hand out of Franc’s mouth, but Franc kept biting harder and harder, according to court records, and the guard had to resort to pulling Franc’s long locks of hair to get her to stop.

In that case, Franc was charged with battery and theft, and she was eventually entered into a pretrial diversion program. Upon successful completion of that program, the charges against her were withdrawn.

Her real estate license in Pennsylvania is assigned to the Keller Williams office in Bryn Mawr, and her Keller Williams broker website was active on Monday. But by Wednesday morning, it was gone, and a Keller Williams representative told us that Franc is no longer associated with their agency.

Franc’s attorney did not respond to a request for comment, so we’ll have to wait to find out where she goes for her blowouts.