Scenes from the move at the Penn Museum on Wednesday morning. 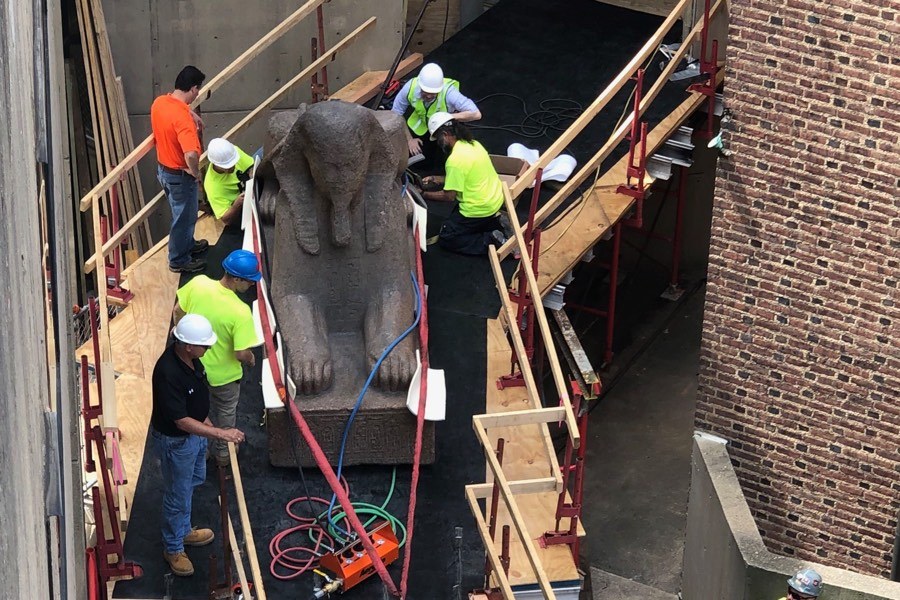 The Penn Museum’s Egyptian sphinx, on the move for the first time since the 1920s. Photo by David Murrell.

The Penn Museum’s 25,000-pound granite Egyptian sphinx has seen many things over the course of 3,000 years — from the reigns of pharaohs to a transatlantic journey to Philadelphia. But until Wednesday, it had never before levitated.

But there the sphinx was, poking its blank face — blunted over millennia of combat with the elements — out of a window, making its way along a path of scaffolding, pushed and pulled by a team of construction workers. Beneath the granite slab were four air dollies, futuristic little devices that shoot compressed air with such force as to be able to lift a 12-ton sphinx off the ground.

A crowd of onlookers, who came to watch this groundbreaking move — from one wing of the museum to the sphinx’s new home in the main entrance hall — cheered. They had been waiting an hour for this moment. The sphinx floated along for maybe 10 feet, and then, five minutes later, settled back down to earth, resting on wooden beams.  It would stay there for another hour. Moving a sphinx, it turns out, is something of an anticlimax.

The total journey, costing the museum $650,000, was just over 300 feet in length, broken into three parts. The first stretch of the move was the easiest: a relative sprint of a few feet, from the inside of the museum, through a window opening, and onto the scaffolding course that connected two sections of the building through a courtyard. The second segment would be the most perilous: a total of 200 feet, at a steep 20 percent incline. And finally, the third: another 100 feet, at 10 percent incline.

This was, of course, hardly the sphinx’s first move. The Egyptologist Flinders Petrie unearthed the beast at the ancient city of Memphis in 1912. The sphinx bore the name of the pharaoh Ramesses the Great carved into its body in hieroglyphs — although now some historians speculate the sphinx may even be older, and that the Egyptian king may have imprinted his name simply to take credit as its builder.

Petrie himself was unattached to any academic entity, so his excavations were funded by a consortium of institutions, Penn among them. In 1912, Petrie wrote to Penn, describing his discovery. “Would such a piece as this be acceptable for your Museum?” he asked. Penn said yes.

(The sphinx is bound to bring up conversations of repatriation of artifacts, and here is what museum staff say about that: Penn had permission to dig and export the sphinx back home from the Egyptian authorities in the 20th century. Though, to be fair, they were colonial authorities. In any case, the modern-day Egyptian government has never asked for the sphinx back, either.)

The sphinx was transported by boat to Philadelphia — insured by Lloyd’s of London for 1,000 British pounds and vaguely described as an “antique rock.” Upon arrival in Philly, the sphinx was carried first by railcar, then by horse-drawn carriage from the Port Richmond docks to Penn. It sat outside for the first three years in its new home, until curators realized Philadelphia weather was perhaps not quite the same as that of the Egyptian desert. The sphinx was soon moved inside. A decade later, it moved yet again, to a new Egyptian gallery, where it had remained ever since.

The second leg of the sphinx’s journey began. A construction worker, wearing a neon green T-shirt with the slogan “#MoveTheSphinx” yelled, “Power up!” The air compressor commenced its droning whirr, and up the sphinx went. From a nearby roof, Penn Museum chief operating officer Melissa Smith watched on. “This was the one we were most worried about,” she said.

The sides of the sphinx had been protected with padding. Four hardhat-clad movers pushed from the rear, barely fitting along the narrow scaffolding. Another pulled from a winch like an oarsman, dragging the sphinx forward. Five men could never lift a 12-ton sphinx on their own, but apparently, according to the laws of physics, once the air dollies push the thing off the ground, it becomes movable with a normal amount of manpower. The sphinx inched along, wobbling back and forth in midair like a barge parked at sea.

From the futuristic air dolly technology used to lift the sphinx, to the small camera that had been mounted on its back, there was something odd about the whole scene, this object of antiquity crashing up against modernity. The sphinx, through its sheer scale, was never meant to move. And for thousands of years, it did indeed remain in place. But no more — this is the age of the Anthropocene, after all.

But the awe that has surrounded the sphinx through its entire existence, that, at least, has not yet changed. As the air compressor shut off and the sphinx returned back to earth, the second leg of its journey now complete, a young boy on the second floor of the museum watched, telling his mother: “I saw it!” And then this: “I saw its butt!”

The sphinx still had the final stretch of its journey to come. First, the movers took a lunch break. Many of the audience left to go about their day. Finally, more than eight hours after the move began, the sphinx poked its head through another window, and was home.