Inside the Hunt for Artifacts Buried Under Philly’s Oldest Properties

Who knew there could be so much treasure in ye olde Colonial privy? 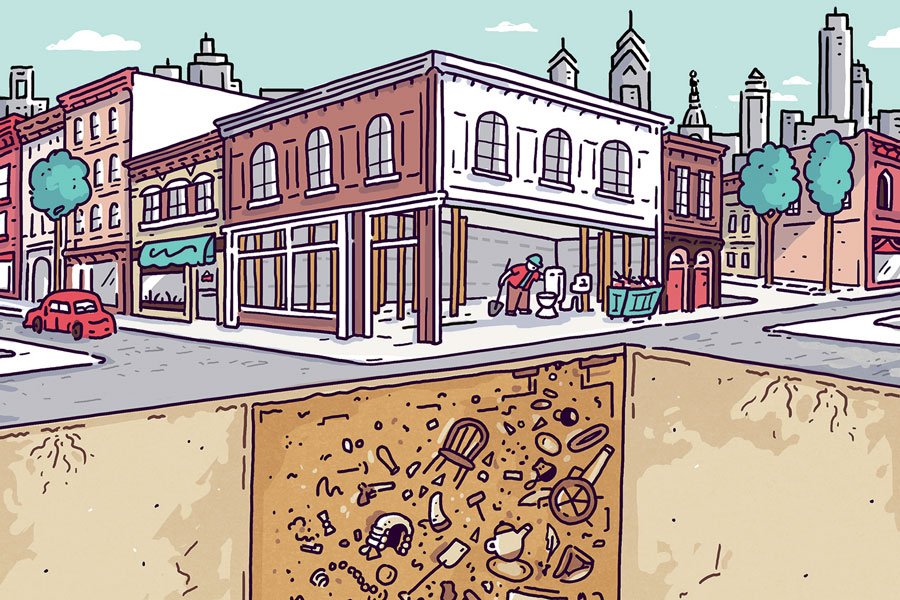 You never know what you’re going to find in the privy. That’s what Melissa and Matt Dunphy discovered in 2016 after they bought the former Grasso’s Magic Theatre in Old City with plans to transform it into an arts venue. The duo — she’s a classical composer, musician and actress; he’s a sales engineer — certainly expected an adventure. But they didn’t expect the adventure to start with the discovery of a few Revolutionary-era artifacts in the site’s subterranean commode.

Perhaps it’s not surprising that below ground in historic cities like ours lie deposits of ceramics and glassware, each piece scientifically significant, some remarkably well-preserved. In Colonial times, people often tossed their broken dishes into the latrine. And pre-bubble-wrap, intact items got thrown in as well — who wanted to wheel breakables over cobblestones when relocating?

You might think that if you uncover a cache of ye olde Colonial cookware in your job site’s foundation, you’re duty-bound to alert the archaeology authorities. Not necessarily — not in Philadelphia, anyway. According to Debbie Miller, a historical archaeologist formerly with the National Park Service, this is only the case if your find involves human remains or your project gets federal or state funding. When it comes to relics on private property, says Miller, our city is the Wild West: “Philly doesn’t have any regulations.”

Those five words, of course, are music to developers’ ears. “A developer doesn’t want uncertainty,” says Ed Dering of Philadelphia Housing Associates, a residential real estate company. Were the city to empanel, say, a pottery-shard oversight board, “I could lose control if I discover an artifact on the site.”

Philly’s laissez-faire approach irks Miller. “We need stronger regulations regarding underground resources in the city,” she says. “We lose sites on a daily basis.”

Philly may be reaching an inflection point on this issue. Back when the city was starved for development and investment, rules weren’t really needed. But in our current bona fide redevelopment renaissance, an anything-goes policy may not make sense for a city that trades on its history.

For now, some property owners invite amateurs (essentially, antiquities-inclined dumpster divers) to get to the bottom of their erstwhile outhouses. Many archaeologists regard privy digging as looting; others — like Miller — grudgingly accept that these urban spelunkers may be the last, best hope some relics have of seeing the light of day.

“We don’t do the same thing as archaeologists,” says Michael Frechette, a Philly artist and landlord who first stumbled on privy digging after he and his son turned up pieces of ceramics in a Kensington lot. “We dig stuff that would never be dug by anybody or that would just end up in a landfill.” That’s true of the interesting-but-mundane objects privy diggers generally excavate, but not, he adds, of the Dunphys’ finds, which are historically significant.

The Dunphys didn’t have the heart to bury their treasure. So with Frechette as an adviser, they dug in. They went where humans have, well, gone before. And they turned up a lode of unusual Revolution-era finds and parts of a rare porcelain bowl manufactured in Colonial Philly. Now they’re deciding whether to donate their collection to a museum, sell it to a private collector, or display it in their theater, the Hannah Callowhill Stage, set to open in 2020. “Once you start pulling artifacts out,” says Melissa, “it becomes a compulsion.”

Published as “Way Down in The Hole” in the February 2019 issue of Philadelphia magazine.