The bar owner is actually making two sets of Donald Trump coasters — one pro-Trump, one anti-Hillary. 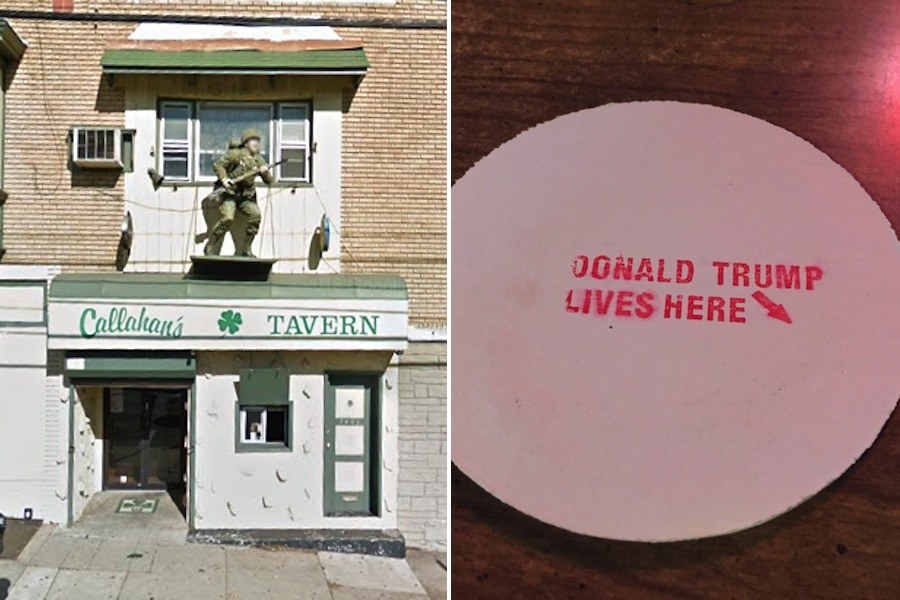 Left: The entrance to Callahan’s in Upper Darby. (Image via Google Maps). Right: The new Donald Trump coasters at Callahan’s.

If you’re looking for a bar where you can watch Donald Trump deliver his State of the Union address on Tuesday night at 9 p.m. — and if you are a huge Donald Trump fan — we think you’ll be quite comfortable at Callahan’s Tavern on West Chester Pike in Upper Darby.

On Monday, Callahan was busily creating the coasters with a custom-made self-inking stamp. Naturally, it uses red ink. 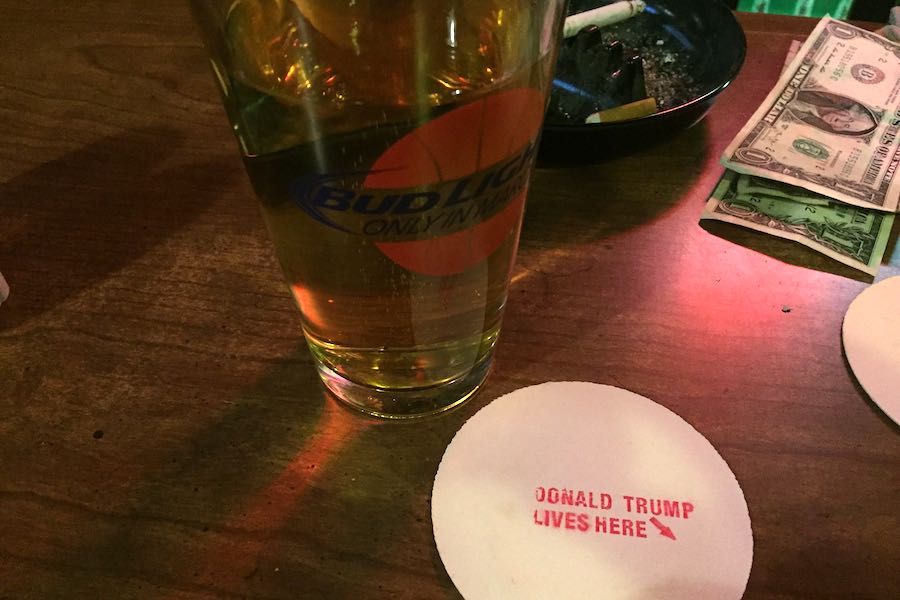 The pro-Donald Trump coaster at Callahan’s Bar in Upper Darby, outside of Philadelphia.

There are actually two pro-Trump coaster designs at Callahan’s, the other reading: “HILLARY CLINTON DOES NOT LIVE HERE.” You can collect them all!

“I’ve been stamping coasters all night,” Callahan, a 72-year-old retired Upper Darby cop, told us on Monday evening. (The stamps are actually designed for use on the back of a $20 bill, with the arrow pointing at the White House.)

Many business owners shy away from taking a political stand, but Callahan isn’t afraid to let his customers know exactly how he feels. On Monday, he was even wearing a pro-Trump baseball cap. And there are other tokens of praise to the president scattered around the bar.

That said, Callahan told us he doesn’t have an issue with Trump-haters coming into his bar, which has been around since 1976.

“Anybody can come in here,” he insisted. “If you’re a Democrat, or whatever.”

“Communists?” we asked him.

“Well, I can’t stop them,” he replied. “It’s not illegal to be a Communist in this country, I don’t think. At least not anymore.”

While some people who voted for Donald Trump have turned their back on his administration — ICYMI: his approval rating is in the crapper — Callahan is steadfast in his support.

When we asked him if there was anything he’d change about his president, Callahan said he wishes that Trump would watch his mouth.

“He’s a little crude when he talks to some people,” Callahan observed. “I wish he would be less crude. His goals seem to be right. But you don’t have to talk rotten.”

As for the State of the Union address, Callahan is anxious to see and hear what’s going to happen:

Will Nancy Pelosi remain seated when he enters the room? Will Trump declare a national emergency? Are we ever going to get this wall built?

We asked Callahan whether he’d be running any drink specials for his watch party at the bar. You know, maybe a dollar off all American-made beers.

“No, that would be prejudiced,” he remarked. “What about the Mexican beers?”