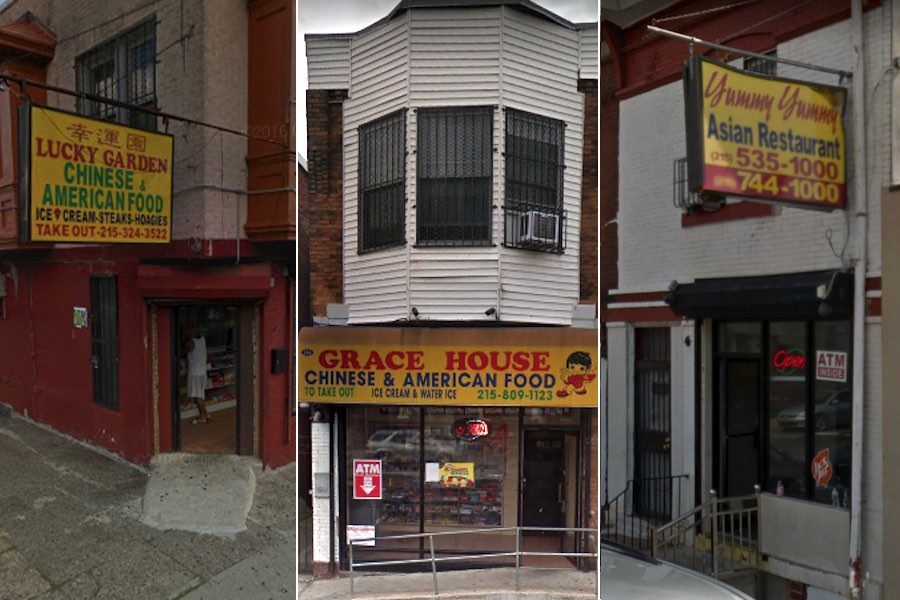 Three of the 21 Chinese restaurants involved in a racial discrimination lawsuit against the City of Philadelphia. (Images via Google Maps)

If you’ve spent any time in the various neighborhoods of Philadelphia, from Kingsessing all the way up to Bustleton, you know that it’s hard to go more than a few blocks without encountering one of those hole-in-the-wall Chinese restaurants with their $5.50 General Tso’s lunch specials, plastic quart containers of homemade sweet tea and lemonade, and $1.49 wonton soups. And now the owners of 21 of those Chinese restaurants have banded together to file a major lawsuit against the city, claiming that police routinely discriminate against them.

You see, Philadelphia has a law that requires takeout restaurants on corner lots in largely residential neighborhoods to close at 11 p.m. That takeout business curfew dates back to 2005, when Mayor John Street signed it into law.

The law’s stated purpose was to curb criminal activity at late-night businesses in residential areas and to “promote a feeling of safety.”

“If it’s a place you go in and there’s Plexiglas and they’re selling Chinese food, crack pipes, cigarette papers, soda, and some places you can even get beer and malt liquor … they’re not restaurants,” Mariano argued at the time, complaining about areas where “there’s a Chinese takeout restaurant on every corner.” He also took issue with the Chinese takeout food itself. “Who knows what they’re eating?” he said. (Mariano also made sure to insist that he was “not picking on Chinese people.”)

But the owners of the Chinese restaurants involved in the suit, filed in federal court earlier this week, say that they’ve never sold drug paraphernalia or alcohol at their establishments. Some say they don’t fit the geographical requirements for the law’s enforcement. And all of them maintain that the Philadelphia Police Department targets Chinese takeout restaurants while allowing other non-Chinese takeout spots to stay open after 11 p.m.

For instance, the owner of Choy Yung Inn, a Chinese takeout located in the Point Breeze section of South Philadelphia, says that the restaurant has received ten code violation tickets from police while a nearby pizza takeout restaurant routinely stays open after 11 p.m. and has never received a ticket.

A West Philly Chinese spot tells a similar story, alleging that police gave them tickets but let the cheesesteak place around the corner operate after 11 p.m. unfettered.

The lawsuit details story after story just like these, and it alleges that the vast majority of tickets handed out to takeout restaurants for violating the 11 p.m. rule are given to Chinese restaurants. In fiscal year 2015, claims the suit, Chinese restaurants accounted for 96 percent of the tickets written by police under the ordinance.

According to the suit, some of the restaurant owners tried to talk to police about the matter.

The owner of Great Wall Chinese Restaurant in Tacony says that when he asked a cop why his restaurant was being targeted but not the non-Chinese takeout restaurant down the street, the cop allegedly replied, “None of your business.” The owner of the now-closed Chinese Clover in Tioga says that a cop threatened to arrest him when he tried to dispute the issue.

In 2016, Councilman David Oh, the first Asian-American elected to City Council in Philadelphia, began investigating complaints from Chinese restaurants about selective enforcement. The next year, Oh sent a letter to then-city solicitor Sozi Tulante, declaring that “the evidence of discrimination is clear.” Shortly after that, say the restaurateurs, cops began leaving them alone, but then the targeting picked up again in 2018, the lawsuit alleges.

The restaurant owners are demanding that the court declare the curfew law void or at least stop the city from enforcing it. They are also asking for unspecified monetary damages, including amounts paid in fines, business losses, and punitive damages.

Both the city and the lawyer for the plaintiffs declined to comment for this story.