It’s about whether Philly and other cities can control their own destiny. 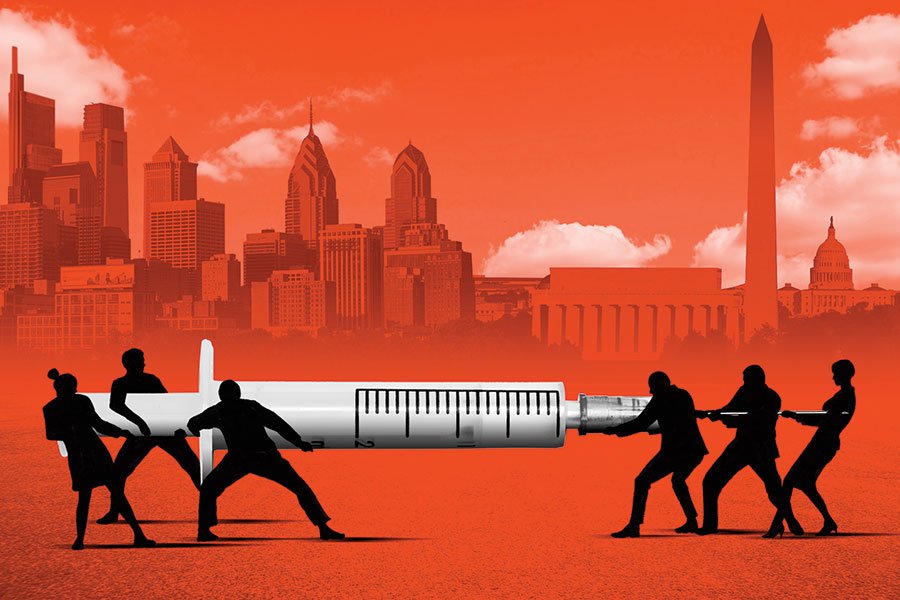 “Cities and counties should expect the Department of Justice to meet the opening of any injection site with swift and aggressive action.”

That was Lower Moreland native Rod Rosenstein in the New York Times on August 28th, bully-pulpiting Philly and other cities over their efforts to counter the opioid epidemic by encouraging the opening of so-called “safe injection sites.”

The city’s response? “The federal government should focus its enforcement on the pill mills and illegal drug traffickers who supply the poison that is killing our residents, not on preventing public health officials from acting to keep Philadelphians from dying,” shot back Department of Public Health spokesman Jim Garrow.

It wasn’t the only time in recent memory the city has essentially told the feds to back off. In July 2017, Jeff Sessions took the podium at the attorney general’s office and dropped this heavy-handed beaut while threatening to slash federal funding: “I urge the City of Philadelphia and every sanctuary city to reconsider the harm they are doing to their residents.” When a court sided with the city, hangdog Mayor Kenney broke out in an actual jig.

You can frame all this in partisan terms, but it’s about more than mere tribalism. It’s about an outdated view of governance at odds with no less than the 10th Amendment to the Constitution — the one that says that powers not granted by the Constitution “are reserved to the States respectively, or to the people.” As odd as it may seem to use conservatives’ second-favorite amendment as a cudgel, this lies at the heart of the injection-sites debate (and the sanctuary-cities debate, and, yes, the health-care debate): the idea that “States” or “the people,” and not the federal government, are best positioned to address such issues.

While the notion of “states’ rights” dates back to our founding, that of “cities’ rights” isn’t exactly new. Chicago political scientist Charles Merriam was ringing that bell back in 1915. But it feels particularly timely right now. We don’t know what the next salvo in the opioid fight will be, but when asked if the city will take action should the feds shutter an injection site, Kenney is blunt: “We’re not speculating on hypotheticals. Our focus is on finding ways to save lives. Just as local governments had to lead during the HIV epidemic, cities like ours will be on the forefront of saving lives in the opioid crisis.”

That’s not just a rally cry for cities’ rights; it’s a compelling plea for the soul of the city.

Published as “Cities’ Rights Now!” in the November 2018 issue of Philadelphia magazine.