The Dedicated Sailors (and … Jet-Skiers?) on Philly’s Rivers

Members of the Liberty Sailing Club may have to dodge tug boats, a ferry, and the occasional tanker, but their reward is a view of the city few others get. Those Schuylkill jet-skiers, though … 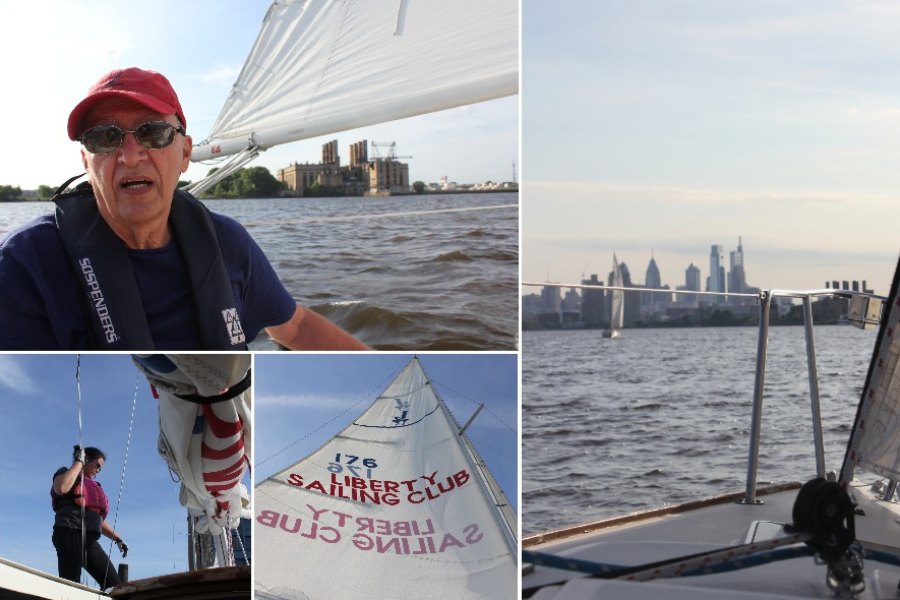 The Delaware River is extremely choppy when I sail for the very first time.

I’m on a small boat with three members of Philadelphia’s Liberty Sailing Club, who tell me that the whitecaps of the water, which glisten in the hot afternoon sun, are caused when the current flows in one direction (out to sea, in this case) while the wind blows in the opposite.

The river looks a little fierce — to me, at least — when our skipper instructs me to turn the boat upwind. I push the wooden tiller as the crew scrambles about the boat, yelling about adjusting the sails. Before I know it, I’m dipping down toward the Delaware as the boat lurches, and the whitecaps are now just behind my back. I jump to port (the left side of the boat, which is now several feet above the height of the river) and prepare to capsize. This is it, I think. Hopefully the Delaware isn’t as nasty as it seems.

I look around. None of the crew members appear even the slightest bit alarmed, so I start to relax. “Is this normal?” I ask Bill Weist, our skipper.

He shouts back, “This is nothing!”

The boat we’re on, one of Liberty Sailing Club’s beautiful J/27s, is designed to self-right; after a few seconds, the hull of the boat evens out. 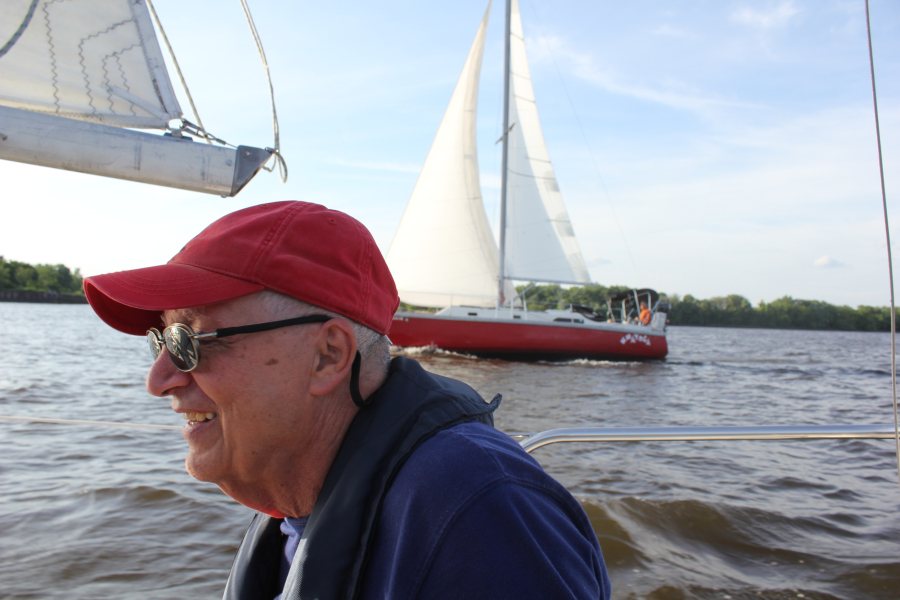 Weist, 73, is a former commodore of Liberty Sailing Club, which has deployed a fleet of elegant, white-sailed J/27s on the Delaware since 1989, when a few Philly-based entrepreneurs got the idea to model the club after the Manhattan Yacht Club, a similar organization in New York City. A few years after its inception, Liberty Sailing Club became a nonprofit, and it’s now the most active and organized of several groups that cruise Philly’s waterways regularly. Its members, like many people who boat and/or sail in Philadelphia, prefer the spacious Delaware, with their headquarters located nearby at 303 North Front Street and their sailboats docked at the Pier 5 marina.

But every day, people explore both of Philly’s rivers — by sailboat, motorboat, yacht, canoe, kayak, and even jet ski. And whether folks opt for a sail on the Delaware or a short, scenic spin up the Schuylkill, they’ll all probably tell you the same thing: that the rivers offer whole new view — and experience — of the city. 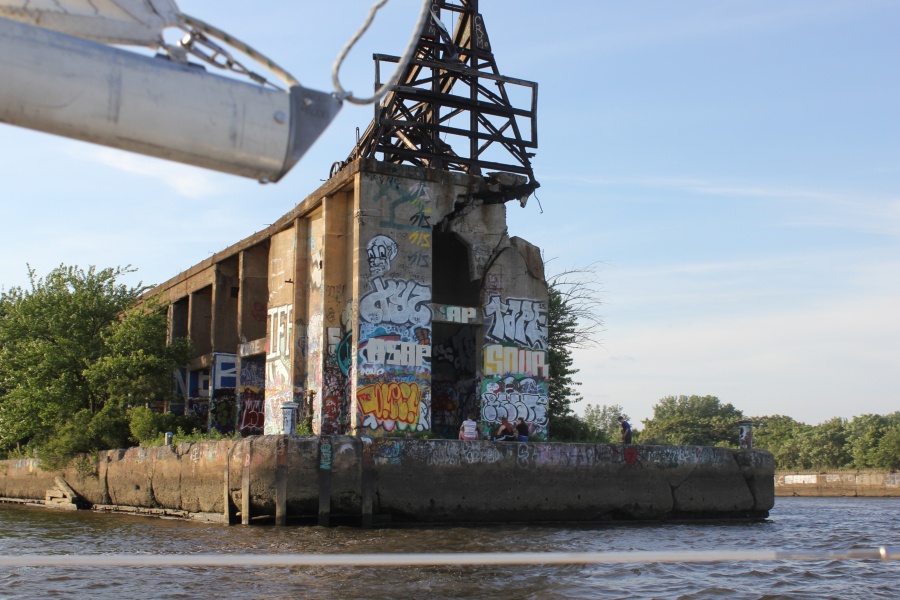 Graffiti Pier from the Delaware River | Photo by Claire Sasko

That’s what 57-year-old Liberty Sailing Club member Kate Ferris says as we’re passing under the Benjamin Franklin Bridge while a PATCO train roars overhead. Ferris grew up sailing in New England and Cape Cod; she says navigating these waters is “different, but just as nice.”

“Philadelphia and Camden are so gorgeous from the water,” Ferris says, smiling. “The views are right here in our backyard.”

The Rules of the Rivers

The Delaware and the Schuylkill rivers might not seem like the cleanest or the most idyllic for sailing, kayaking or jet-skiing — but all of these activities are fair game.

Officer Nathan Hancock of the Pennsylvania Fish and Boating Commission, which oversees the state’s waterways, stresses that there are a rules you have to follow if you’re using the rivers. They’re similar to the kinds of restrictions that you’d see driving: “There are speed restrictions in certain areas, right-of-way rules that have to be followed, obviously safety equipment that needs to be in a boat, required lighting equipment on a boat if it’s going to be out after dark,” Hancock says. 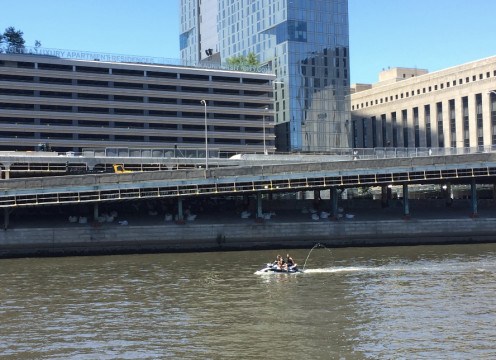 A jet ski on the Schuylkill River | Photo by Claire Sasko

You also have to wear a coast-guard-approved life vest (which sailors call a “PFD,” short for portable flotation device) and carry some sort of sound device, like a whistle. But other than that, he says, “If it’s a boat and you can find a place to fit it, you can pretty much drive it up the river to your heart’s content.”

When it comes to the comparably smaller Schuylkill, Hancock says, “Obviously you’re not going to drive a luxury 50-foot yacht up to the Fairmount dam.”

But what you will see on the Schuylkill — south of the Fairmount dam, at least — are small motor boats, kayaks and jet skis, which are regulated the same way as boats. With a quick scan of Twitter, you’ll (perhaps understandably) see a lot of questioning as to why anyone would want to jet ski on the Schuylkill River.

“It’s a fun boat ride going up there, from downtown up by the Art Museum,” he says. “It’s really enjoyable.”

And it sure is beautiful. Behold one jet-skier who shared his ride to YouTube in 2015:

Hancock says that on a nice summer day, you can typically expect to see roughly 20 to 30 boats (including jet skis) on the tidal portion of the Schuylkill, where boats with motors must stick to idling speed.

While the Boathouse Row area would also make for a stunning spin, you won’t (or shouldn’t) see any jet skis or recreational boats in that stretch of the Schuylkill, which includes the water north of the dam near the Art Museum and south of the Girard Avenue bridge. Only rowing boats are permitted there.

Paddlecrafts like kayaks and canoes are growing in popularity on the Schuylkill as well, Hancock says. Bartram’s Garden in Southwest Philly, for example, offers weekly free row-boating and canoeing from its boat, and you can also pay to take kayaking tours on the Schuylkill through Hidden River Outfitters.

Head to the river this weekend and take a kayak or riverboat tour! Paddle your way along the Schuylkill or relax inside @phillybyboat's mini commuter yacht. See some spectacular views of the city, @FairmountWW and @BartramsGarden. More info: https://t.co/slkmJlDhdt pic.twitter.com/ojkjxD0a15

Most of the time, the Schuylkill River is “relatively calm,” Hancock says. But boaters, kayakers and jet-skiers should use caution when the tide is flowing out to the Delaware River, because the water can be moving “deceptively fast,” Hancock says. That’s especially true after heavy rain, when the water level rises and the river is more likely to carry dangerous debris.

“You get tangled up in a tree, and you’re in trouble real fast,” he says. “It can be really hazardous.” 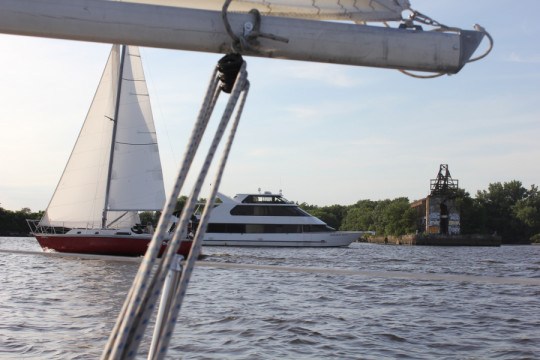 A yacht and a sailboat pass. | Photo by Claire Sasko

With the sun on our shoulders and the water lapping at the sides of our boat, Weist tells me that if you can sail the Delaware, “you can sail pretty much anywhere.”

After all, you have to be nimble on the Delaware: Liberty Sailing Club shares the water with vehicles like tankers, tug boats, a ferry, and at least three party boats. The river brings a different kind of traffic, and there are right-of-way rules about who must yield to whom.

Typically, the smaller boats with more mobility must make way for the larger boats, which are trickier to move at the last minute. But sailboats without motors are always given right-of-way priority — except for commercial boats, which are given priority over all recreational vehicles.

We encountered a few different types of boats during our sail — including a motor boat.

Weist, who joined Liberty Sailing Club in 1991 and served as commodore in 1994, tells me he sticks to three rules when it comes to boating: First, keep your boat safe; second, keep the people on it safe; and third, have fun. The boat comes first, he says, because “If the boat’s safe, everyone on it’s safe.”

As we sail and I occasionally steer (with slightly more confidence now), I’m struck by the amount of collaboration required to keep our little craft afloat. Weist, Kate Ferris and our third crew member, 56-year-old Chip Herr, adjust to the sails with the utmost care and attention.

I see the same synergy when we dock up beside another crew that includes Maggie McMahan, who served as commodore in 2003. It’s a full-blown operation, with all hands on deck (and a lot of shouting).

After all, teamwork is exactly what the members of Liberty Sailing Club signed up for: The group is the only sailing club in Philadelphia that offers access to a fleet of club-owned boats (all J/27s), and members must chip in and help maintain the boats.

For that reason, the club is your best option if you want to sail the Delaware regularly but don’t own your own boat. (Groups like the Philadelphia Yacht Club, on the other hand, might be more desirable if you have your own boat but are looking for something social.) But while joining Liberty Sailing Club is much cheaper than actually buying and maintaining a boat, it’s not necessarily low-cost: A full-member crew membership, which includes a season of sailing from April through November, goes for $950 a year (plus a $100 first-year initiation fee). A half-season crew membership, which includes July through November, costs $500, plus the first year initiation fee. The club does offer a variety of discounted memberships, though. 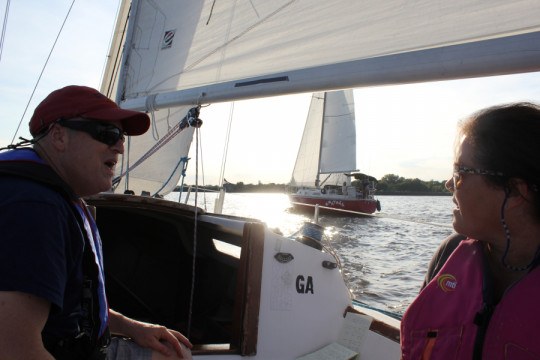 You don’t need any experience to join the club as a crew member — and you might be surprised by how easy the hobby is to take up. On the other hand, if know the ropes, you can consider joining as a skipper (though you’ll have to pass an on-the-water test for the title). Either way, there’s no shortage of opportunities to get out on the water if you join the club: Members offer “social sailing” twice a week, racing twice a week, and your choice of racing or casual sailing on Sundays. They also hold events on some holidays, like the Fourth of July.

The day I sailed was a “social sailing” Tuesday, so after we docked, everyone who attended headed to the group’s nearby clubhouse, a small, laid-back space decorated with sailboat paintings, model sailboats, a small wooden canoe and a string of nautical flags draped over the bar space.

Here we munched on hoagies and Ruffles for nearly two hours as members told stories about riveting races and club awards, and plenty of people talked about their love of sailing. One older sailor with an affinity for puns told me that typically, friends and acquaintances will leave the room when he goes on “pun streaks.” He likes sailing because “there’s nowhere to go on a boat.”

By the end of the night, the club camaraderie and the earlier killer views of the skyline, the Benjamin Franklin Bridge, Petty’s Island and Graffiti Pier left me all but convinced that I’d sail on the Delaware again.

Until then, I’ll try kayaking on the Schuylkill — and maybe one day I’ll even hop on a jet ski. 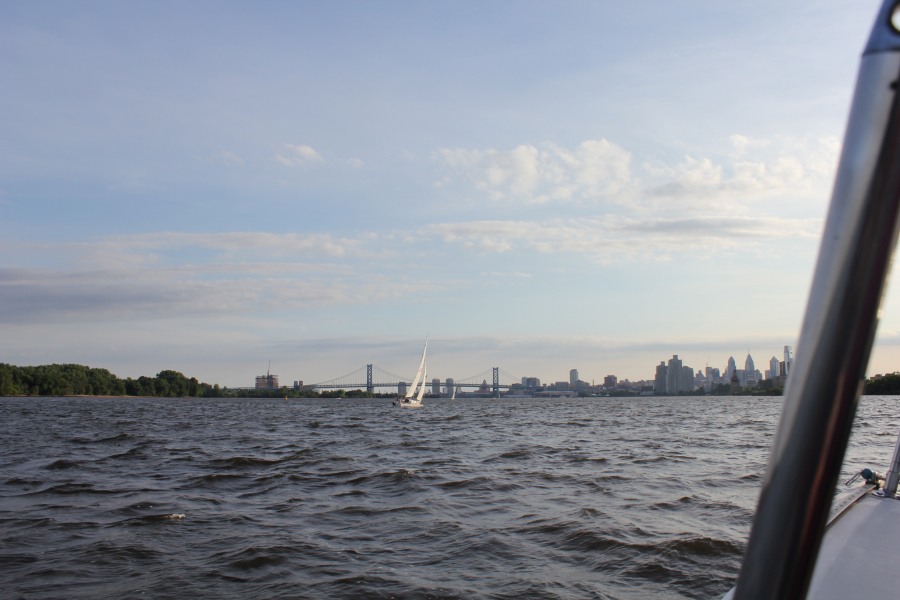