On most nights between March and June, a small group of animal-lovers stops traffic on a Roxborough road to save some tiny toads. We decided to tag along. 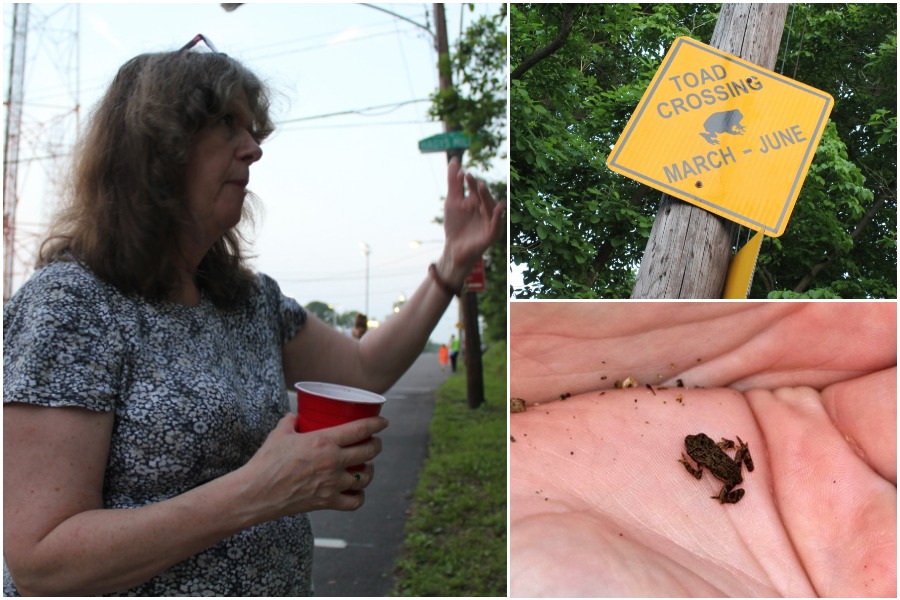 The sun is setting on a hazy, humid Friday, and most of my friends have chosen to start the weekend by ambling to art galleries or prepping for a evening of bar-hopping — just as I had planned to. Instead, I’m kneeling in the dirt about 10 miles northwest of Center City, staring at a bunch of unbelievably tiny toads.

The toads — babies, around 6 weeks old — dart wildly through patches of grass and decaying leaves near the intersection of Hagys Mill Road and Port Royal Avenue, about a five-minute walk from the main building of the Schuylkill Center for Environmental Education. They’re so small that at first glance, if you’re standing, they look like spiders — or maybe it seems like the ground is moving. You have to get on all fours and cup one of them in your hands (if you’re not too squeamish) to fully appreciate their minuscule size: They’re sort-of-cute, perfectly scaled, shrunken-down versions of their parents. 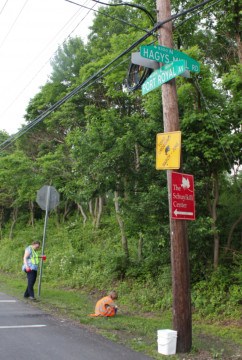 The whole endeavor is a little wacky and a little wonderful — and somehow, wildly popular. Though the “Toad Detour” is a casual, small-scale operation spread primarily by word of mouth and Facebook, more than 400 people have come out so far this year to save the toads. Last year’s toad-crossing season drew more than 700 people, according to Schuylkill Center volunteer coordinator Claire Morgan. In the past, Morgan says, people have traveled from as far as New York City for the sole purpose of shuffling toads across a quiet, wooded street in Philadelphia.

Here’s how the Toad Detour works: On most spring and early summer nights, volunteers with the Schuylkill Center dutifully scan Port Royal Avenue for hopeful toads lingering on the side of the cement. If they notice an abundance, they’ll put out some road barricades (including signs that say things like “CAUTION: TOAD DETOUR AHEAD”), shut down nearby streets (thanks to their on-hand city-issued permit), and put out a call for help on the “Toad Detour at the Schuylkill Center” Facebook page. It’s hard to predict when these small-scale migrations will occur — which is how I found myself here on a Friday of all nights.

When the temperature rises in the spring (usually in March or April), ambitious, fully matured toads will head toward the Upper Roxborough Reservoir Preserve to reproduce. The reservoir, which was built in the 1890s and retired in the 1960s, is located directly adjacent to the Schuylkill Center property, which includes four miles of trails and five small ponds. Unlike their aquatic relative the frog, toads prefer to live on land — but they need water to lay eggs. The large basin of the reservoir is ideal for this duty.

This year, the Schuylkill Center has helped about 2,300 adult toads cross from their property to the reservoir. (Their record is 2,400, set in 2014.) I attended the second wave of the annual Toad Detour, which kicked off in late May, after the babies hatched and set out in the reverse direction. We helped them get to the woods of the Schuylkill Center, where they’ll mature for three years before repeating the quest of their parents before them. 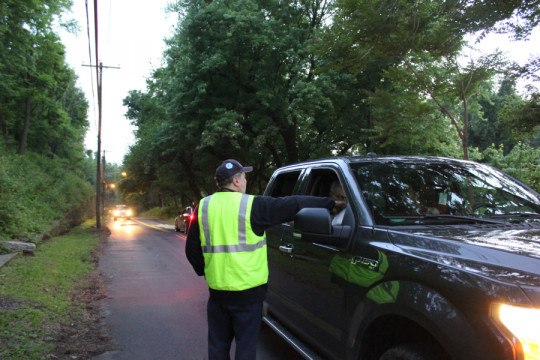 A curious passerby stops to ask a volunteer about the Toad Detour. | Photo by Claire Sasko

When I first pulled up to Hagys Mill Road and Port Royal Avenue around 7 p.m. on Friday, the only other toad-defender in sight was Morgan, a 63-year-old certified Schuylkill Center environmental educator wearing khakis and a blue and white floral-patterned shirt. At one point, Morgan pulled out her phone and asked, “Hey Siri, how many eggs does a female American toad lay?” Siri told us that American toads lay between 4,000 and 8,000 eggs. So Morgan estimated that the number of toadlets crossing Port Royal Avenue this summer was likely in the millions.

As the night continued, four families and some solo toad-lovers joined us. Most of the newcomers decided to come on a whim; they would shout from their car windows: “Any toads tonight?” or “What’re you looking for?” Then they’d pull over and shuffle out of their vehicles. Together we donned reflective vests and hovered over the grass, scooping toadlets into red and green party cups, then emptying the cups into large white bins, where they waited for their ride across the road.

Pleasant conversations ensued as we fulfilled our mission. Most people spoke of their love of nature and helping other animals, including a friendly mother and her preteen triplet daughters, who told me that they had also saved birds, squirrels, and a bat. “We always manage to find some sort of wounded animal,” the mother said.

We also talked about jobs, families (all of the parents said their kids love Toad Detours), hobbies — life, in general. One retired woman told me she used to make candles that looked like waterfalls, then said with a sigh that the most important thing in life is to “find something you’re passionate about.” Twice, a young boy handed me a wounded toad with a concerned look on his face. Both times I cringed as I accepted the toad, void of any useful advice regarding the potential life lesson unfolding before us — but luckily, Morgan came to the rescue. “We can’t save them all,” she said, grimacing at the little thing in my hand. “Just put it in the bucket, and maybe it’ll make it. Sometimes they do.” 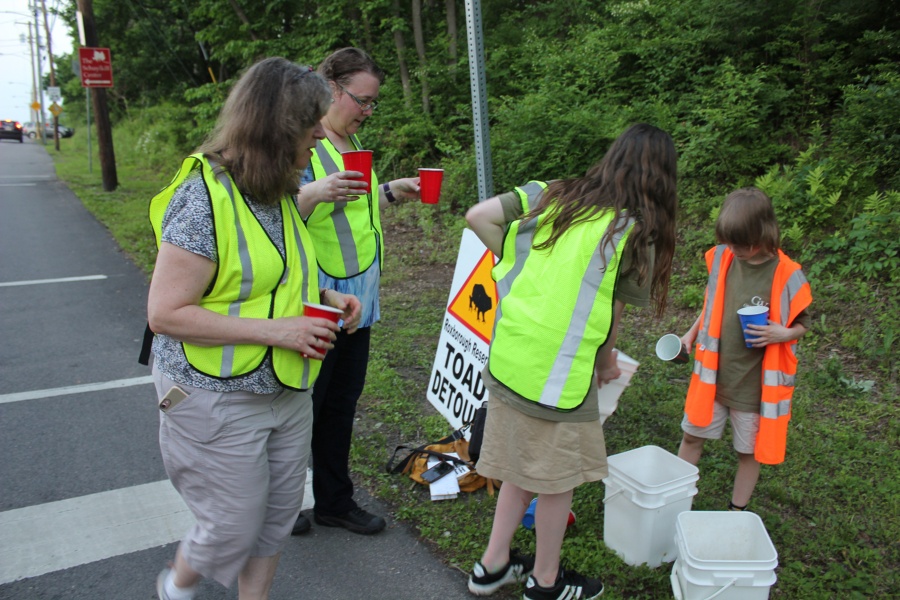 About 20 volunteers came to help the Toad Detour on Friday. Claire Morgan stands to the left. | Photo by Claire Sasko

Eventually night came, and we carried flashlights and shuffled a few more buckets across the road before it calling quits. By the end of the evening, everyone seemed to feel equally productive and serene, and I realized why some people, like Shana Goldin-Perschbacher, are loyal Toad Detour participants.

Goldin-Perschbacher, a 39-year-old assistant professor of music history at Temple University, has attended four Toad Detours since she first heard about them on Facebook and “thought it sounded like a nice way to help out with the environment at a time when there are a lot of terrible things happening, and you feel helpless about how to make a difference.”

“It makes an immediate difference when you help a toad across the road and save a life,” Goldin-Perschbacher said as we wrapped up the evening, noting that before her first Toad Detour, she hadn’t caught a toad in 30 years. “It’s really sweet. The people who have shown up give me some faith in humanity when my faith in humans has compromised. And it’s peaceful out here — it’s a little haven in the city. It’s nice to hear the birds at sunset.” 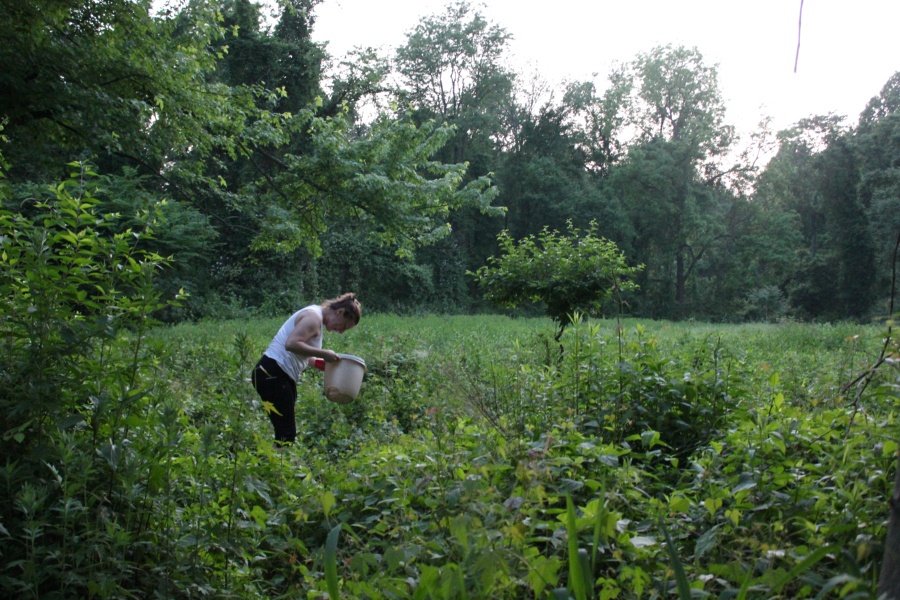 Shana Goldin-Perschbacher dumps a bucket of toadlets in the woods on the Schuylkill Center property. | Photo by Claire Sasko

The Toad Detours are now in their tenth year. Morgan, who lives in the area, has organized them through the Schuylkill Center for the past seven years, after the woman who started them, Lisa Levinson, moved to California.

Rich Giordano, president of the Upper Roxborough Civic Association, stopped by Hagys Mill Road and Port Royal Avenue at the end of our Toad Detour last Friday. Giordano said people used to get “irate” when the Schuylkill Center would shut down the roads. Now, he said, there’s an “awareness” of the Toad Detour in the neighborhood, and people are more accepting — even enthusiastic.

Morgan said people should recognize that there’s a “human-created problem, which is a lack of space for these creatures, because there’s so much development that goes on in a city.

“To have this open-space area where this movement just naturally happens — we should promote it and help it,” Morgan said.

Plus, when it comes to the human adults who return every year, there’s something to be said about the bliss of crawling around in the dirt again, searching for critters.

“I think it’s attractive to not just kids, but seniors and everyone in between,” Morgan said. “It’s one time where people get to interact with nature close-up. It’s not like just seeing a bird fly by. You can actually pick these toads up in your hand. I think that establishes a real connection with nature.” 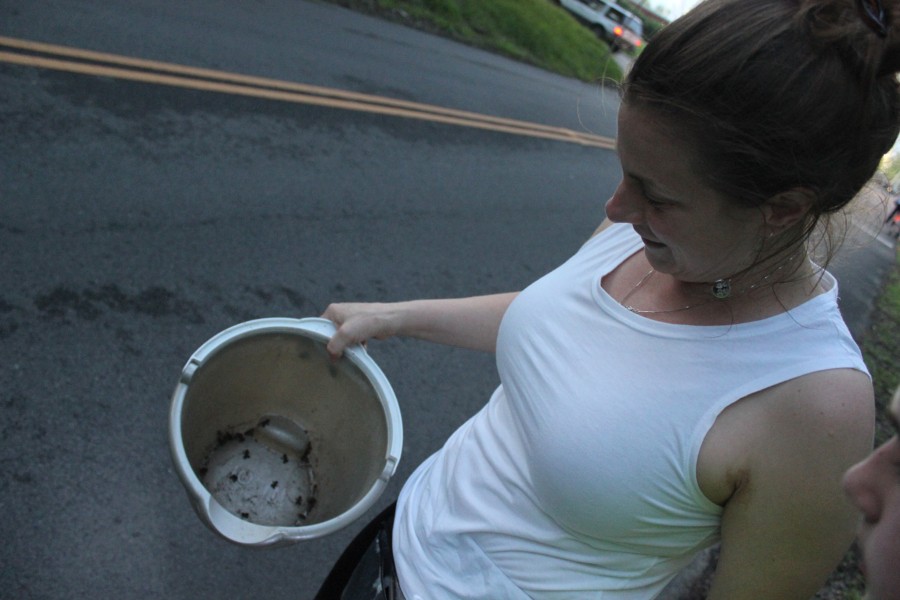