Think the Supreme Court Cake Ruling Is Bad? In Pa., It’s So Much Worse

Outside of Pennsylvania’s major cities and a few other municipalities, it’s completely legal to discriminate against LGBTQ people. 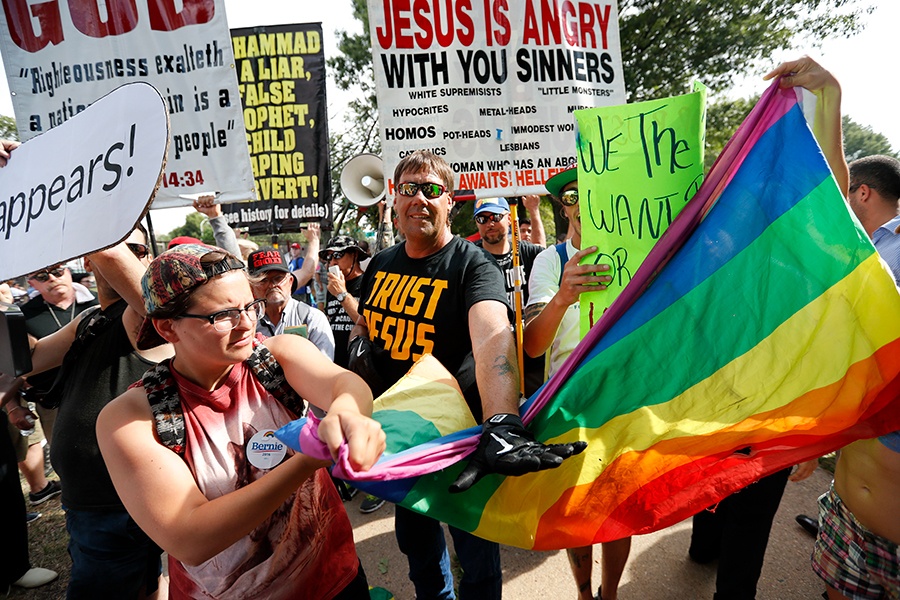 Demonstrators wrestle over a gay pride flag during the 2016 DNC in Philadelphia. Photo by Alex Brandon/AP

On Monday morning, the Supreme Court disrupted what was beginning to be a joyful LGBTQ Pride month. In a 7-2 decision, the nation’s highest court ruled in favor of a Colorado baker who refused to bake a wedding cake for a same-sex couple on religious grounds. While many on social media expressed fear that the ruling is the first major victory in an all-out attack on hard-won nondiscrimination rights across the country, some experts are arguing that this particular case is so narrow in legal scope that it won’t set a precedent for future courts.

Nevertheless, the ruling still hurts. During a month in which the LGBTQ community comes together with allies to celebrate our existence and ongoing resilience, we have been reminded that our humanity is not embraced in many parts of the country. And while many eagerly blame the Trump administration for such setbacks, I would argue that the struggle long predates it. It didn’t take a Supreme Court ruling to remind me that same-sex couples who are free to marry anywhere in the country still may not be able to buy their wedding cake there. Anyone reading this in Pennsylvania need look no farther than our current laws, which leave LGBTQ individuals unprotected from discrimination across the board.

Within the commonwealth, it is legal for businesses to refuse to hire, to deny a mortgage to, and to prohibit public accommodations (such as hotel, library, or hospital services) to LGBTQ Pennsylvanians. There are only 48 municipalities, including Philadelphia, in the commonwealth that specifically prohibit discrimination on the basis of sexual orientation, gender identity, or both. So areas like Erie County (which comprises 38 individual municipalities) and Allegheny County (which has 130) aren’t protecting all of their LGBTQ residents.

In Harrisburg, legislators have been trying to pass the Pennsylvania Fairness Act for some time. The act, currently known as HB 1510 and SB 974, would add protections for gender identity/expression and sexual orientation to Pennsylvania’s existing Human Relations Act, which was passed in 1955. Currently, 22 states and Washington, D.C. — including every state in the Northeast — have enacted statewide LGBTQ nondiscrimination laws that Pennsylvania lacks. In light of this, the Colorado baker’s Supreme Court victory is inherently one for many like him in our state who hold similar beliefs.

Which is why it’s time to shift the conversation beyond wedding cakes and same-sex marriage in general and fight for an overhaul of the entire system. It’s not enough to keep fighting for piece-by-piece improvements — incremental change can only go so far before change itself becomes threatened. Three years ago, Pride month felt different: The Supreme Court had just ruled in favor of same-sex marriage, and many people were quick to assume that this victory would open doors to other advancements. This week we are reminded that, without a continuous fight for sweeping change, a landmark Supreme Court decision is only that.

This makes me reflect upon the civil rights era, when the Supreme Court ruled in favor of desegregating public schools before federal law eventually made all expressions of racial discrimination illegal. The landmark Brown v. Board of Education ruling helped to advance civil rights, as Obergefell v. Hodges helped to advance LGBTQ rights — but it wasn’t until the Civil Rights Act of 1964 that barriers truly began to shatter. We are still waiting for the Equality Act — a federal law that would include sexual orientation and gender identity to the current Civil Rights Act — to free us from all forms of legalized discrimination nationwide.

As the significance of Pride month is inevitably amplified after this disappointing decision, the community and our allies have to do more than just cling to symbols and empty platitudes that speak of inclusion — we must actually fight for it. The midterm elections are only a few months away, and several candidates promote platforms that strive to keep LGBTQ Pennsylvanians disenfranchised. If we don’t want to lose any more than we can possibly face, the “love is love” narrative won’t be enough this time to save us.

This Supreme Court decision is about more than just baking a cake — it’s about deciding who gets their humanity validated and why. It’s time to stand up and fight back in the voting booths, town halls, and institutions that continue to marginalize our very existence in our own backyard.