The clip shows the arrest of Emily Weinman, a 20-year-old mother from Philadelphia, by two police officers. 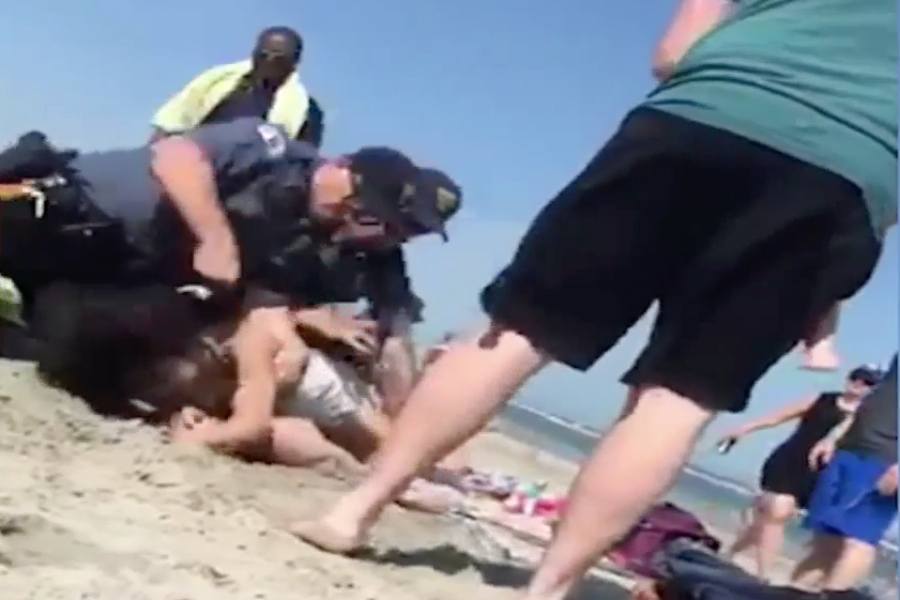 The Wildwood Police Department reassigned two officers to desk duty after they were captured on video punching a woman during an arrest on the beach over Memorial Day weekend.

Footage of the incident, which was posted on Twitter and shared by multiple news outlets, went viral this weekend. In the clip, which is under investigation, the two officers attempt to wrestle the woman to the ground. One of them can be seen punching her in the head several times as people nearby yell, “Stop resisting!” The woman can be heard yelling, “You’re not allowed to hit me like that!” and “I didn’t do anything wrong!”

I was sleeping on the beach and I woke up to this.. i can’t believe it.. pic.twitter.com/UJE5Sy7E4G

The two officers seen in the clip have not been identified. Wildwood police chief Robert Regalbuto told 6ABC that the video being shared “doesn’t tell the full story” and that the department will release the officers’ body camera footage, which reveals more of the incident, within the coming days.

The woman in the video has been identified as 20-year-old Emily Weinman of Philadelphia. In a since-deleted Facebook post, Weinman said the officers approached her and a friend and asked them their ages before conducting a Breathalyzer test on Weinman, which she said came back negative, according to Heavy.com. Weinman reportedly said she admitted having beer but that she hadn’t drunk any.

Weinman said that after the officers stuck around, she asked them why they didn’t have anything better to do. When one officer attempted to write her up, she said she didn’t want to give him her name and that she had her 18-month-old daughter with her, according to the Heavy.com. She claimed things got out of hand after she tripped and fell.

Wildwood mayor Ernie Troiano Jr. told the Inquirer that the incident was a “shame” and that forthcoming body camera footage would show Weinman insulting the officers and spitting on them.

“We don’t like to see anyone get hit, period,” he told the publication. “But then again, when you have someone who’s aggressively attacking you or spitting at you … I wasn’t there. I don’t know.”

Anyone who was present during the incident is being asked to call Detective Lt. Kenneth Gallagher at 609-522-0222.