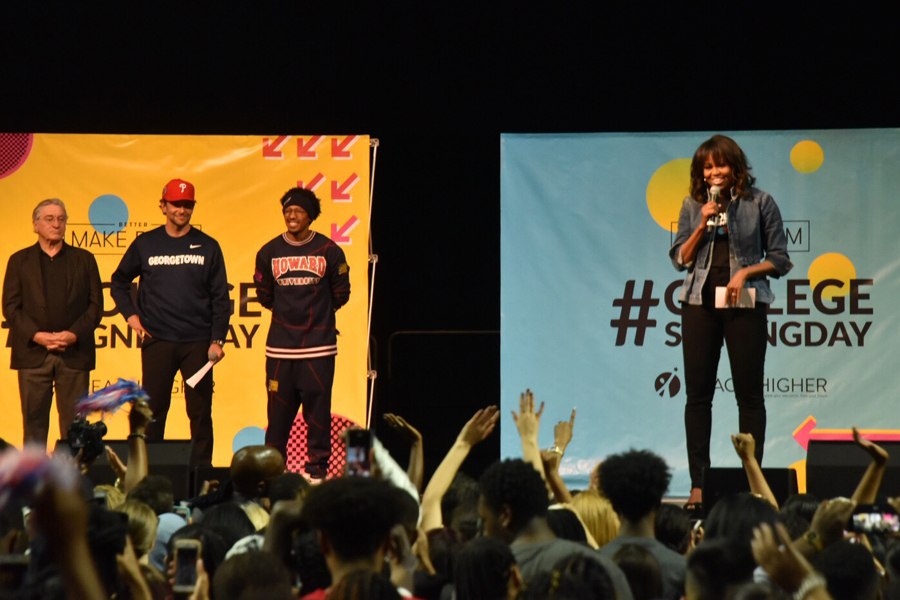 There were more than 2,000 College Signing Day events all across the country on Wednesday, but none was more packed with stars than the afternoon party held at Temple University.

The program, which celebrates high school seniors choosing to pursue higher education, had everything: It was emceed by Nick Cannon, featured live performances from musical artists that kids these days know and go nuts over, and was capped off by a keynote address from Michelle Obama. (Or as Cannon called her, the “forever First Lady.”)

“We have such high hopes for you,” Obama told the crowd of eager teens at the Liacouras Center. “See, I am not one of those doubters. I know that you have everything it takes to succeed. I know you are me, and if I can be standing here as your ‘forever First Lady,’ then you can do anything you put your mind to.”

Obama spoke about her own past as a student, hearing from a guidance counselor that she should temper her expectations a bit in applying to colleges — after which she went to Princeton.

“College was the most incredible experience of my life,” said Cooper, who took the stage wearing a Phillies hat. “It is up to you. You are the future. We are counting on you. Congratulations, it’s an exciting time in your lives!”

Mayor Kenney and a handful of Philadelphia School District officials were there, too, but obviously they remained overshadowed by Obama, who drew the largest applause of the day.

“You will have some struggles, but that’s OK,” she cautioned. “See when you hit those roadblocks, have trouble in that one class, feel like you’re falling behind – you have to ask for help. No one gets through college on their own … Don’t be too proud to get the help you need.”