Starbucks: Manager Who Called 911 No Longer Works at Rittenhouse Location

Protesters occupied the chain’s location at 18th and Spruce for the second day on Monday before it closed at midday. 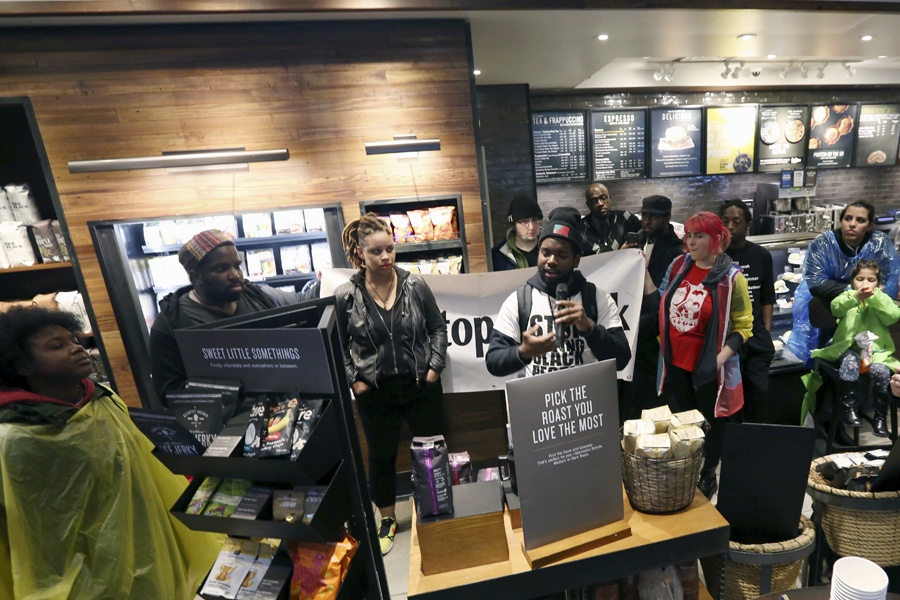 The manager who called the police on two black men subsequently arrested for trespassing is “no longer an employee” of the coffee chain’s outpost on 18th and Spruce streets, a Starbucks spokesman confirmed to 6ABC. It is currently unclear, however, whether the manager has been fired or transferred.

For the second straight day, protesters with the Black and Brown Workers Cooperative and Philly for Real Justice joined in demanding the removal of the unidentified manager at Starbucks’ Rittenhouse Square location. Their presence on Monday afternoon was so overwhelming that the store ended up closing for business for the day.

UPDATE: @Starbucks store on 18th & Spruce is NOW CLOSED after a powerful direct action done this morning by @BBworkers & @PHLRealJustice! Check out their work on gentrification and racial justice. #StarbucksWhileBlack

Happening NOW: Protesters *inside of Center City @Starbucks store where two black men were arrested after sitting in store without purchasing a drink. Protesters demanding employee who called police be fired. @6abc pic.twitter.com/cEmemwcDwC

Protestor speaking to @Starbucks manager: “We are going to make sure we shut you down” @6abc pic.twitter.com/b6wlPononu

Peaceful protest at @Starbucks by people of all colors. To the one aggressive man across the street arguing for his “white privilege,” you are outnumbered. Get used to it. pic.twitter.com/DDjMfBmDF5

#BLMPhilly protest inside and outside of Starbucks on 18th & Spruce. @AsaKhalif held it down today. pic.twitter.com/vWiV0QBncG

Clergy leaders representing more than 50 interfaith congregations will host another demonstration on Monday afternoon, even with Starbucks CEO Kevin Johnson in town on his tour to make amends. (He’s got a meeting with Mayor Kenney and will also reportedly offer a face-to-face apology to the two men.)

Beginning at 3:30 p.m., protesters will gather at The Philadelphia Ethical Society and then march to the Starbucks on Spruce. The occupation of the store lasted for approximately five hours on Monday before management agreed to close.