Satine Harlow says “I stand by what I did” after performing an “iconic” number from The Producers in a swastika-emblazoned windbreaker and an SS cap. 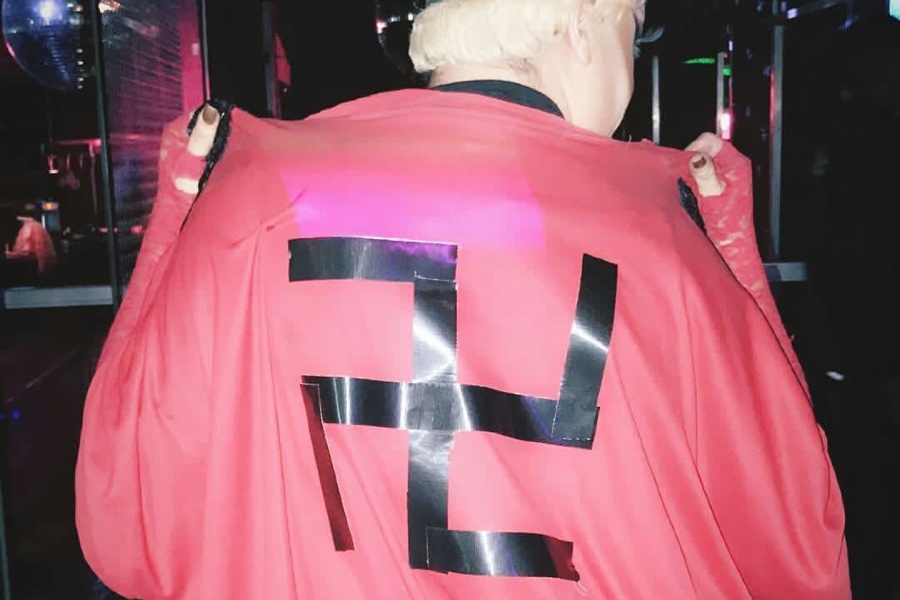 Local drag performer Satine Harlow sparked a fan backlash after wearing a costume that many are calling offensive during a Monday-night performance at controversial Gayborhood bar ICandy.

Harlow, whose real name is Eric Ziker, wore a red windbreaker with a huge electrical-tape swastika on the back and a black cap resembling the ones that Nazi SS officers wore. According to an audience member who saw the performance but asked to be anonymous due to “fear of being publicly associated with ICandy,” the host of the drag showcase explained that “the performance was satire and based on a musical.”

“When I saw the musical number,” the audience member said, “I realized Satine was inspired by the Broadway musical The Producers. But when I checked Satine’s Instagram page, how they promoted themselves was a different story.”

In a now deleted image from the Satine Harlow Instagram feed, Ziker was pictured wearing the Nazi-inspired costume with the words “Heil Hitler” as the caption: 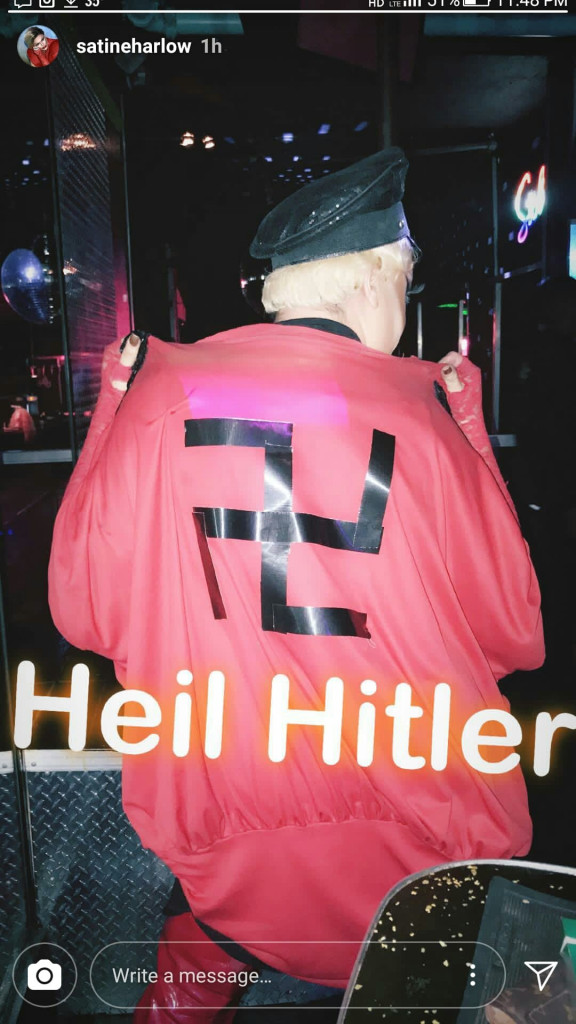 Several fans took to social media to criticize the costume and how it was presented “without any context.” “I’ve said it before but I’ll say it again. Choosing to perform at ICandy is a political statement,” wrote drag performer Ann Artist. “Given the fact that this is the stance these performers choose I’m never surprised when they do anything that’s tacky and in poor taste like this. This level of bad taste is reflected in the name of the establishment and mirrored through the irreverence the performers have for their fellow community members.”

“No one needs [to be] reminded Nazis are bad. (If that was even your point),” another commenter posted in the thread. “What the fuck kind of bar allows THIS type of shit to walk in the door let alone get onto the stage? Oh right, THE FUCKING RACIST ONE. (icandy) Even if Satine’s entire number was dubbed over with ‘this is wrong’ and ‘nazis fuck off’ it doesn’t matter, cos Satine uploaded a photo to FB without any explanation and threw a hate slogan over it for good measure.”

On Tuesday morning, Ziker, who identifies as Jewish, took to his Instagram story thread to post the following statement:

Are people really freaking the fuck out about a Jewish gay man doing an iconic number from a musical? Jesus Christ. Lighten the fuck up. It’s drag. We’re professional, some of us, pigs in wigs. Breathe. I stand by what I did…and if you disagree, unfollow me because you have no sense of humor. 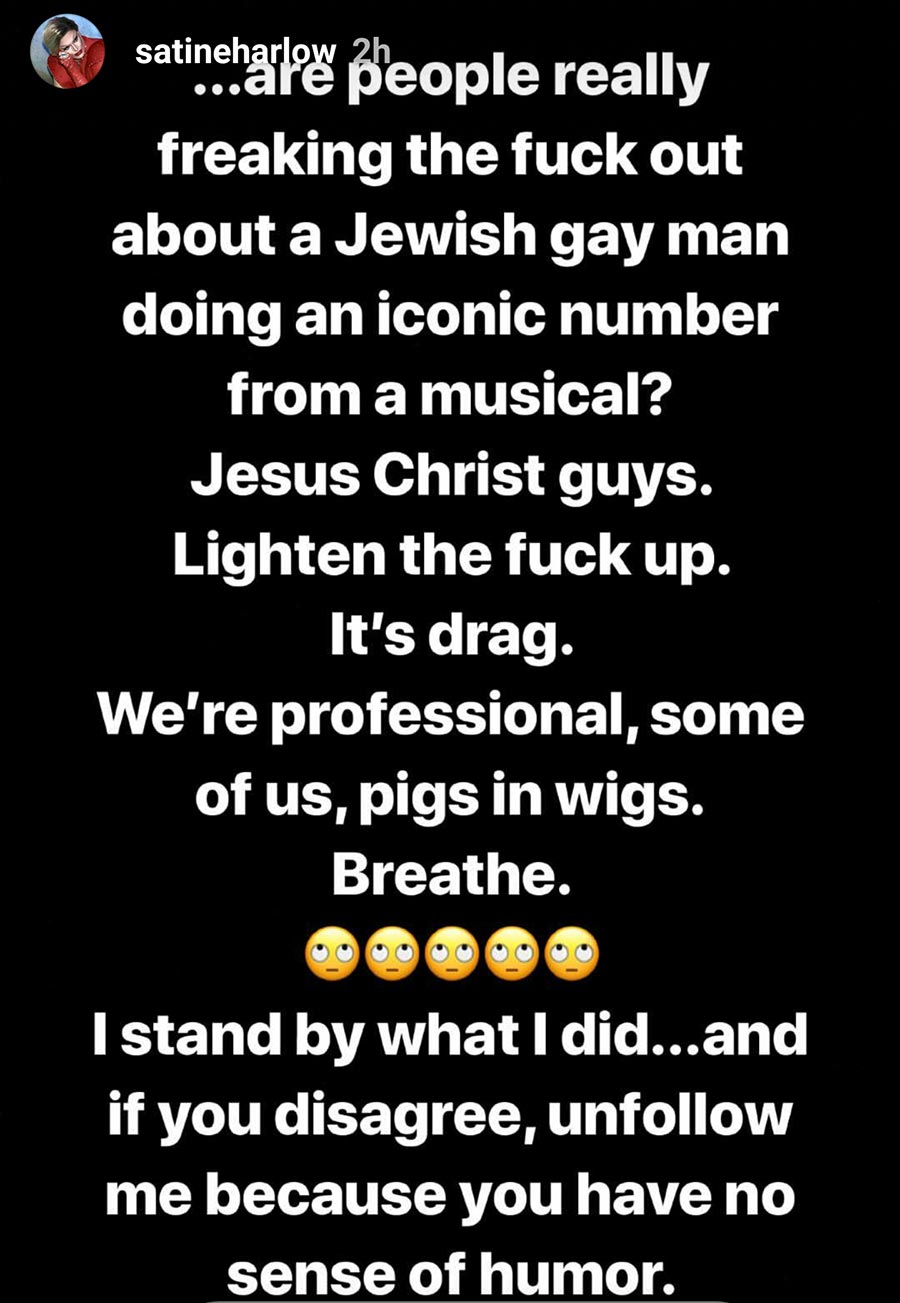 When asked for comment by Philadelphia magazine, Ziker simply sent the following link that features the Broadway musical number “Springtime for Hitler” from The Producers and remarked “That’s it.”

Since then, Ziker has changed his Facebok profile picture into the following image criticizing “political correctness”: 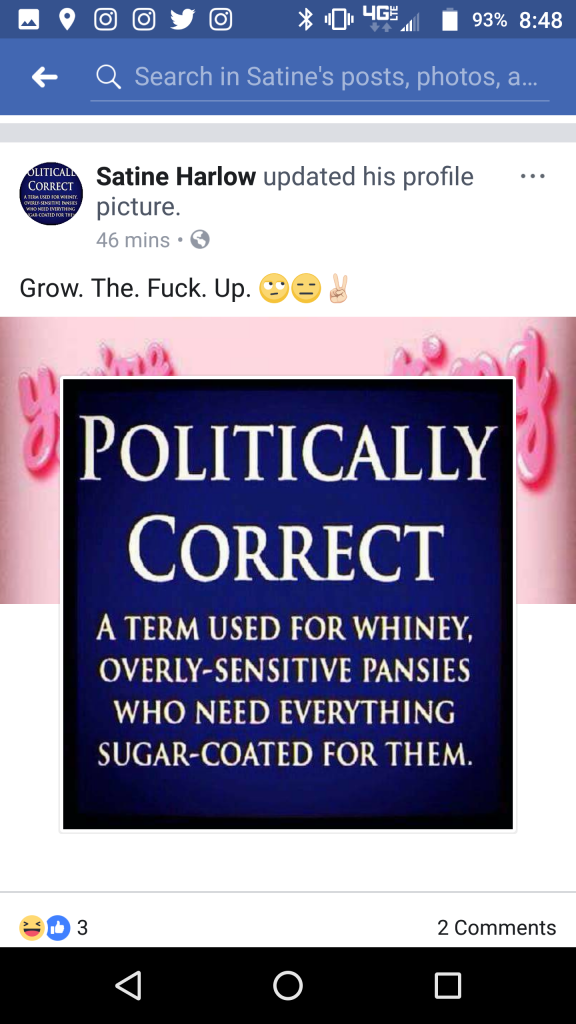 ICandy did not respond to Philadelphia magazine’s request for comment.