The Eagles Parade: A Love Letter to Philly

I went not as a devoted Eagles fan, but as a lifelong fan of my city — my now undeniably world-class city. 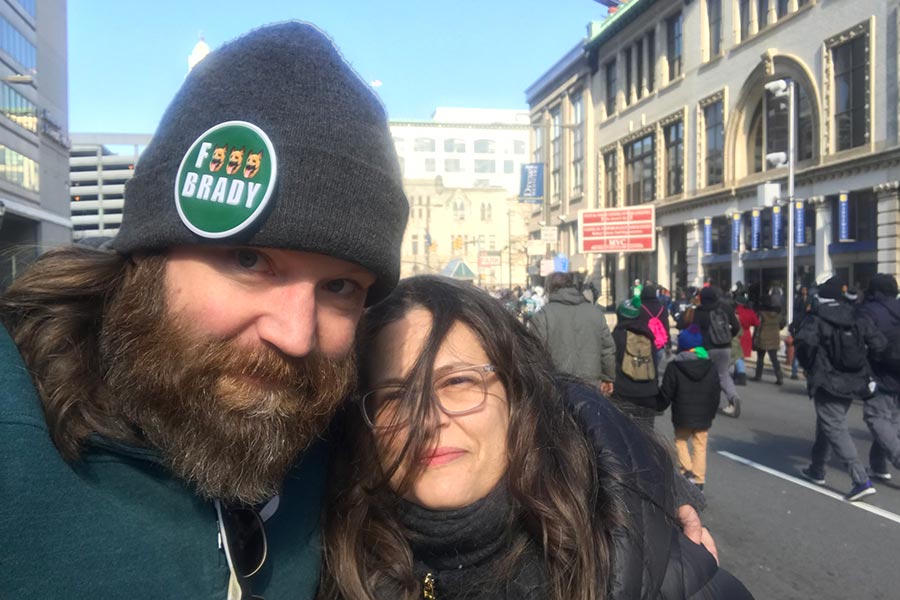 The author, right, with the photographer, left, on parade day. (Photo by Bradley Maule)

If my shoes could talk they would say this: “I bring you tales of Parkway mud, battered vegetation, wet strips of green confetti, traces of urine and watermelon juice.

“I bring you the story of 16,730 steps taken — a couple on top of a mud-spattered sign saying FREE MEEK MILL — all of them in the service of a football team whose breakout speaking star is a profane bearded giant garbed in the dress of an Irish genie string musician.

“I bring you, in short, a history of amor civitatis, a love of one’s city so deep, so finely etched in the shoe-wearer’s DNA, that 7 miles through Fern Rock and Logan, Center City and Fairmount, South Philly and North Broad, can feel like a maddening yet joyful sprint through the map of one’s heart.”

So yeah. I went to the Eagles parade.

I should confess that I did this as a Philadelphian, born and bred, not as a devoted fan of football. I tend to agree with an assessment offered by Scott Stossel in the Atlantic a few years ago: Citing instances of “cheating, taxpayer fleecing, bounty hunting, domestic abuse, brain damage, suicide, even murder (and murder-suicide),” Stossel wrote, “The NFL is greedy and violent and may be damaging the brains of a new generation of players — yet we evidently can’t stop watching the show it puts on for us.” I sided with those who were boycotting this year, which didn’t mean much in practice since I never watched football to begin with.

Yet all those high-minded objections were put aside on the night of the Super Bowl. Because if there’s one thing I love more than I hate football, it’s my hometown. I knew what being in the Super Bowl meant: It was a chance at redemption, at defying every person alive who’s said the city is shit and its people are losers. Winning would be pure joy, and that’s what I wanted for the people of Philly: unbounded happiness instead of disappointment.

I watched the game alone in my apartment; I’ve been such a killjoy on the subject of football that no one invited me to a Super Bowl party. I screamed and shouted at the TV and hoisted my dog, who is the size of a football, into the air when we scored a touchdown. When things got dicey in the third quarter, I found myself feeling bereft in a way I didn’t even understand, thinking, “Why did I even hope? Of course we’re going to lose. This is what always happens. What a disaster.” I pictured the grim faces on the train the next day, the set of the shoulders of a people accustomed to the futility of hope.

A few minutes before the game ended, a friend in California sent me a text: “Do you believe in miracles?” When the miracle actually happened, I threw on my sneakers and coat and ran outside in my sweatpants. I hugged strangers, made tearful phone calls, and drove my car up and down Germantown Avenue, honking and waving and giggling. What an idiot, I thought. And also: What joy.

Parade day was a happily muted version of that insanity. Getting on the Broad Street Line at Fern Rock, all the parade-goers chatted away with unguarded camaraderie. The things that typically divide us — class, race, age, neighborhood, politics — melted away, and we were all just Philadelphians. Philadelphians who were winners, for once.

A woman brought a Bluetooth speaker onto the subway car and started blasting the unofficial Eagles anthem, Meek Mill’s “Dreams and Nightmares”: “Ain’t this what they’ve been waiting for? You ready?” Everyone smiled and sang along.

Making my way down Broad, I was only able to reach Catharine Street before it got too crowded. A little girl sat on her father’s shoulder, and marveled, “There’s a lot of people here!” That was true, but the crowd was calm, waiting patiently. They saluted their heroes as they went by in big green buses, and then dispersed easily.

At City Hall, people were up on the statues, dancing to loud music. One woman was doing a pole dancing routine without the pole, and flashed her breasts to the crowd below. The feeling was celebratory but acquiring a sort of dark edge. By the time I reached the Parkway, the edge was sharp. People were shoving, men were urinating in plain sight, trash was everywhere, the crowds were enormous. I’ve never seen that many people on the city’s streets. At one point, I could see nothing on any side except coat sleeves and wide backs. I felt a surge of panic. I turned around and tore through the crowd until I reached an area where I could move my arms.

I didn’t see anything more scandalous than people being happy or drunk or, mostly, both. Later in the evening, I saw friends who hadn’t gone to the parade. Two of them asked me, separately, “What’s the worst thing you saw?” I didn’t have any gory details. It was almost anticlimactic, and slightly unfamiliar as a Philadelphian accustomed to disaster. SEPTA was organized and well staffed, and the city has clearly learned from successfully hosting the DNC, the NFL Draft and the pope’s visit. As another Philly native said to me, with wonder in his voice, “They pulled it all together so quickly, and did such a good job. It’s what a world-class city would do.”

At one point in the day, as I squeezed between people in Dawkins and Wentz jerseys on my way along sunny Broad, I heard a guy say to his friend, “What a time to be alive, man.”

As a Philadelphian, if not as a football fan, I couldn’t disagree.