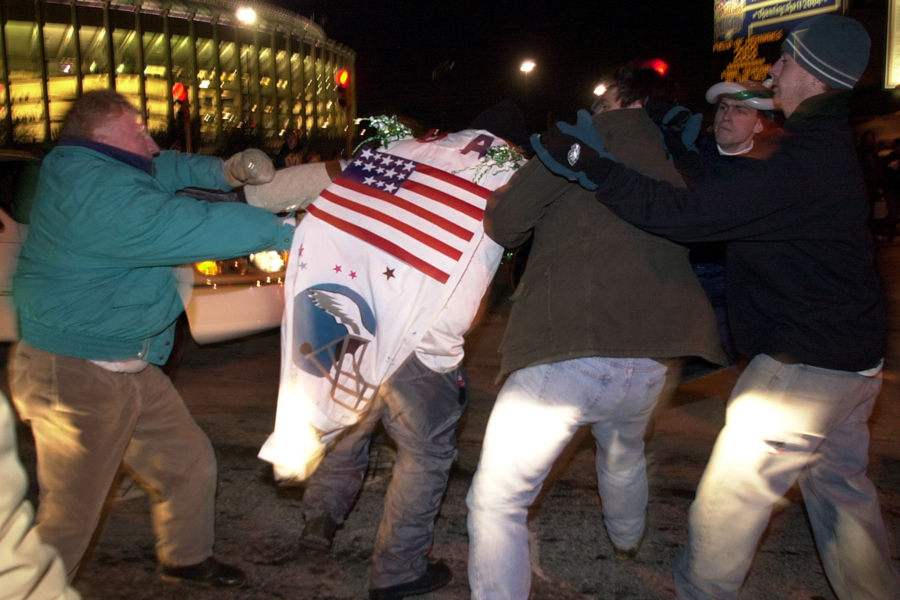 Would you believe that the most heinous act of violence ever perpetrated by an Eagles fan occurred this year – during the middle of last Saturday’s playoff game against Atlanta, to be precise. While the rest of the crowd was on the edge of their midnight green seats, one particularly inebriated spectator missed his beloved Birds earn their first postseason victory in 10 years because he drank too many Budweisers, got ejected from Lincoln Financial Field, and socked a police horse.

The story of Taylor Hendricks reads like some slapstick Hollywood script that would catch Adam Sandler’s questionable eye, but here in Philadelphia this sort of boorish behavior is regrettably rooted more in fact than fantasy. Truth is, Eagles fans are the worst, and we all know it. The FOX affiliate in Minneapolis recently likened us to a street gang, which wouldn’t be such a devastating comparison if it weren’t so damn accurate. At least in England they don’t sugarcoat the anarchy associated with their inferior brand of football.

“Philly fans don’t scream for a win; they’re out for serious blood,” Dallas Morning News reporter Richard Justice wrote years ago when describing Veterans Stadium, the now-infamous former home of the Eagles from 1971 to 2003. This culture of depravity extends back generations – predating the Kennedy assassination! – and while the miscreants represent but only a small corner of the Birds Nest, their actions are often so unforgivable that they become the stuff of legend. 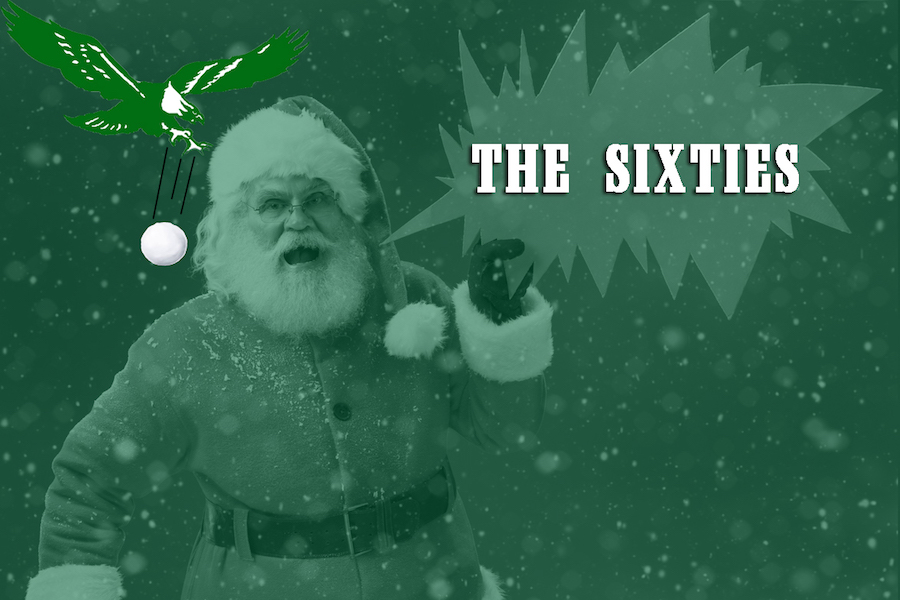 Mayhem at the 1960 NFL Championship Game
Seven years before this game was renamed the Super Bowl, the Eagles defeated the mighty Green Bay Packers at Franklin Field to win the franchise’s third NFL championship. Back in the days of Eisenhower, Birds fans became known for storming the field despite impassioned pleas from the Philadelphia Police Department to end the dangerous practice. The 1960 title game was especially rowdy as fans brawled with officers in the stands and pelted them with ice balls. Sgt. Martin Egan was hospitalized after being slashed “from cheekbone to chin” during the mayhem.

Quotable
“We were told at least 14 fans suffered broken bones during Eagles games,” Police Commissioner Albert N. Brown said following the conclusion of the 1960 season. “In past games orderly fans would be leaving the field when others would jump on top of them from the eight-foot parapet around the field.”

Object of Scorn
Former coach Joe Kuharich. Fans were really mad at Kuharich – a bumbling buffoon who cost the team a shot at drafting O.J. Simpson by winning too much. (Could you imagine if “The Juice” had been an Eagle!?)

Fans paid for a plane bearing the message “Joe Must Go” to fly over Franklin Field in 1968. Thankfully, owner Jerry Wolman listened.

Worse Than Snowballs
It’s funny: The pelting of Santa on December 15, 1968, may be the hallmark of bad Eagles fan behavior in the national media (we know the real story here and can’t blame the boobirds for voicing their displeasure with a drunken Kris Kringle wannabe), but it was nowhere near the worst incident of that day. A fan was actually clotheslined by Hall of Fame lineman Bob Brown after he ran onto the sidelines to debate Kuharich’s coaching tactics. 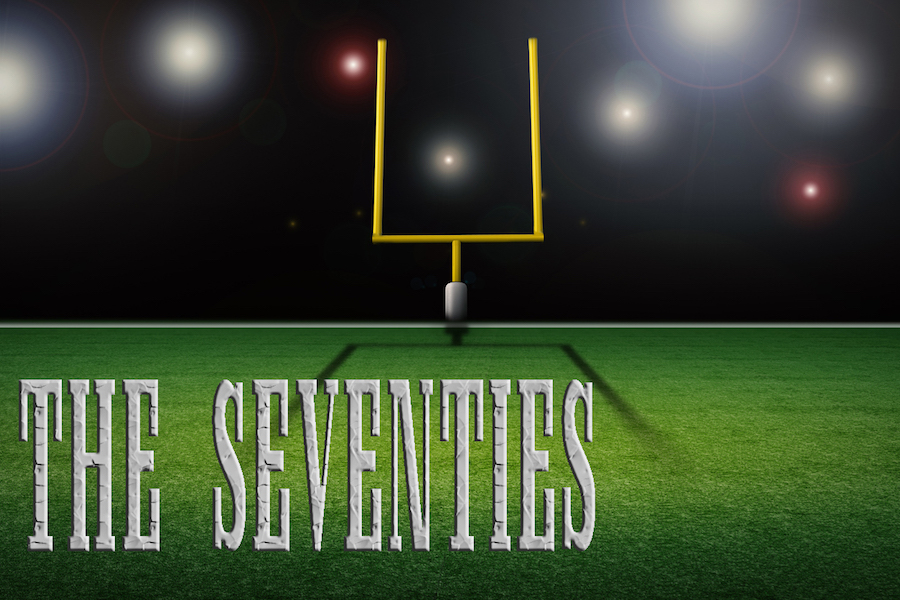 Ready for Our Closeup!
Eagles fans sure didn’t disappoint during their first appearance on Monday Night Football in 1970. Prior to the game, new owner Leonard Tose took out the broadcast crew for dinner and drinks at a swanky Center City restaurant. A notorious lush, anchor Howard Cosell got so drunk that he left the telecast during halftime. Too bad, as he missed Eagles fans tear down both goalposts after the Birds pulled out an upset win over the hated New York Giants.

Coach Fights Back
In 1976, the Eagles made an interesting hire that left most in the Delaware Valley scratching their heads. A college coach, Dick Vermeil never had full say over a professional organization before – although it’s not like the Birds were all that professional at the time. During his first season, Vermeil was jogging toward the tunnel at Veterans Stadium when he was stopped by an unruly fan who proceeded to tell that “son of a bitch” he should go back to where he came from.

Incensed by the sting of defeat and the Philly faithful piling on, Vermeil jumped into the stands to confront the man before he was tackled by then-assistant coach (and all-time Eagles badass) Chuck Bednarik. Cooler heads prevailed.

Concrete Donut
Veterans Stadium, lovingly referred to as “The Nest of Death” by fans and a “dump and a toilet” by former linebacker Bill Bergey, debuted in the early half of the decade as a state-of-the-art facility home to both the Eagles and the Phillies. Its general admission seating in the 700 Level soon became a rendezvous point for the most belligerent supporters, who often would come to games prepared with a flask or bottle should the beer man happen to deny them libation. Rumor has it there was even a makeshift peephole into the dressing room of the Eagles cheerleaders at the Vet. 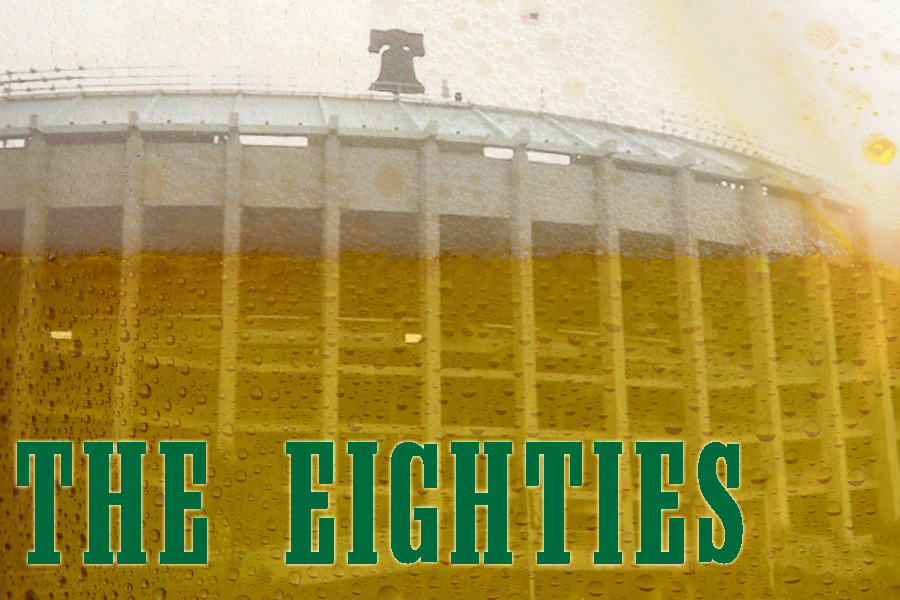 Quotable
“This is a football game,” Eagles president Harry Gamble told the Inquirer in 1986, “an activity that should have a family-type setting where people can bring their youngsters and wives and not have to worry about being in a brawl, hearing foul language or getting beer thrown on them. We’re doing what we can to bring that about.”

The Vet Goes Dry in ’89
Years of alcohol abuse by fans and the inability of stadium staff to control its unruly mob in green spurred the Eagles to ban beer sales at the Vet for two games in 1989. (Alcohol was also prohibited at all parking lot tailgates, but wealthy fans were free to buy booze in their box seats. Go figure.) The last straw was that season’s home game against the Dallas Cowboys, which saw roughly 70 season ticketholders kicked out of the stadium and the national embarrassment of Philly’s epic snowball fight with Jimmy Johnson.

Union Town
In 1987, the NFL’s players union voted to go on strike upon the expiration of their collective bargaining agreement. With the league playing hardball, replacement players were used from weeks four through six. Fan turnout was less than ideal, and Philly’s lone home game during that span stands as one of the least-attended professional sports games in history. To make matters worse, the several thousand people who did show up to the Vet had to walk through a gauntlet of local tradesmen first. “I wouldn’t go in unless I was heavily insured,” one forward-thinking teamster said at the time. 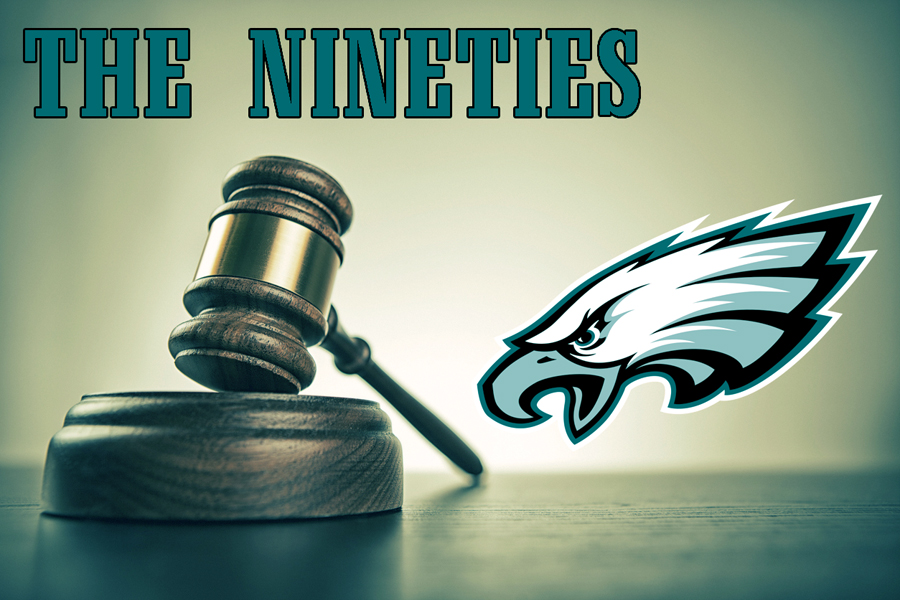 That Game Where Someone Shot Off a Flare Gun
For the 1997 Eagles, the team’s Week 11 matchup with the San Francisco 49ers stood as a barometer for whether the playoffs were a realistic goal. They weren’t, which explains why police were called to deal with 60 separate fistfights in the stands. By this point in the Vet’s history, fan violence had become so egregious that it was normalized. A man from New Jersey smuggled a flare gun into the stadium and fired it into a section of empty seats, which finally caught the attention of city officials.

All Rise
With the beer ban of the ’80s having little to no effect on curbing the Vet’s raucous atmosphere, drastic measures needed to be taken by the mid-’90s. The flare gun incident was just the latest in a long line of despicable behavior from Birds fans. Sensing that all Veterans Stadium was missing was a little law and order, a cohort of local leaders, including then-councilman Jim Kenney, instituted an “Eagles Court” to swiftly adjudicate and detain any undesirables before they had a chance to sober up.

Quotable
“One of the interesting facts that came out of Eagles Court was that 95 percent of the people arrested were not from Philadelphia,” Judge Seamus McCaffery said in a 2011 interview with the Philadelphia Bar Association. “When you look at where the arrestees came from, it was Bucks County, Montgomery County, Delaware County, the state of Delaware and New Jersey. We even had people from as far away as Montana.”

Object of Scorn
Cowboys wide receiver Michael Irvin, who by 1999 had tormented the Birds for over a decade en route to winning three Super Bowls with Dallas. But when Irvin lay motionless on the Vet’s cold concrete turf, we cheered his career-ending neck injury. Certainly not one of the finer moments in the history of Eagles fandom. 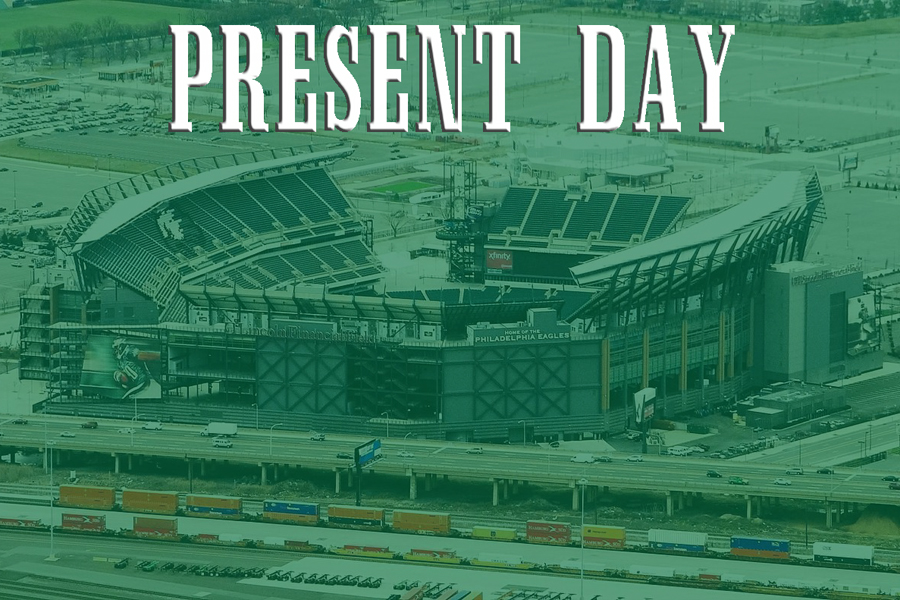 The Philadelphia Police Department “declared war” on the maniacs that inhabited the Vet in 2000, and while that struggle is never-ending, 18 years later it would appear that the boys in blue have come out on top. A shiny new stadium, devoid of a courtroom, has taught Eagles fans to cherish the nice things we have. Having a winner on the field doesn’t hurt, either.

Perhaps it was the passing of the old guard – you know, the guys who used to bring knives to Franklin Field – that softened some of Eagles Nation’s rough edges. In any event, the bottom line is games aren’t nearly as unruly as they used to be. And that’s a good thing. But foe beware, because this is still Philadelphia and men like Taylor Hendricks will always be in attendance on Sundays.