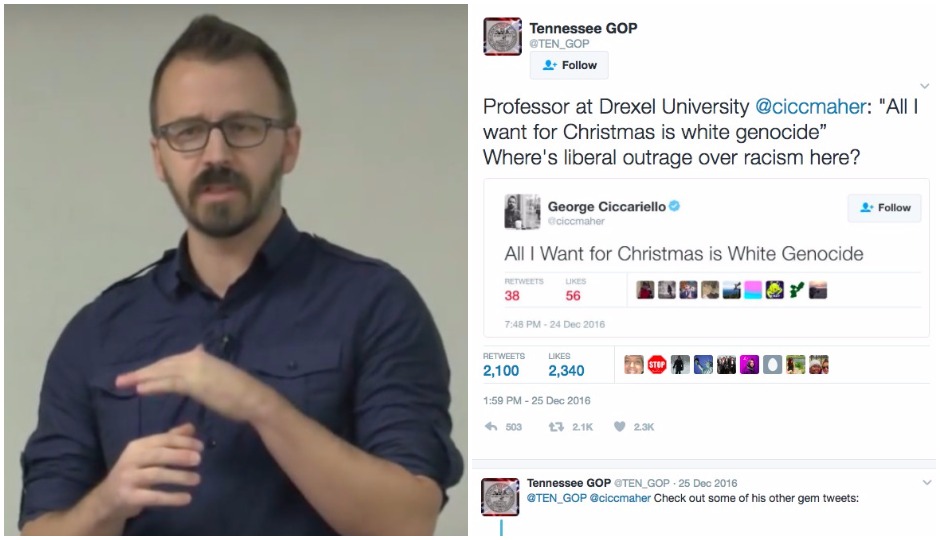 You’ve probably seen at least one of George Ciccariello-Maher’s tweets.

The infamous Drexel University professor’s contentious content ranges from quips like “All I Want for Christmas is White Genocide” to rants on how “Trumpism” and “white victimization” led to the Las Vegas shooting earlier this month, and, last but not least: “Some guy gave up his first class seat for a uniformed soldier. People are thanking him. I’m trying not to vomit or yell about Mosul.”

Ciccariello-Maher’s combative remarks and refusal to back down when faced with opposition have made him a polarizing figure. Earlier this month, Drexel placed him on academic leave, citing concerns over “both his safety and the safety of Drexel’s community.” After facing considerable backlash, the university has since decided to let him teach online.

Some laud the professor as a free speech advocate; others say he’s a hypocrite for criticizing Drexel for condemning his tweets while calling for others to be fired for offensive remarks. Last year, Breitbart labeled him “a communist professor” (a title which he readily claims), catapulting him into the flame wars of liberals and white supremacists around the world.

This week, we learned an interesting tidbit about Ciccariello-Maher: a Russian “troll farm” apparently played a vital roll in stoking his internet fame. According to the Foundation for Individual Rights in Education, one of Ciccariell-Maher’s most infamous tweets was picked up by mainstream media via @TEN_GOP, a now-deleted Russia-based and Kremlin-tied account that posed as the “Unofficial Twitter of Tennessee Republicans.”

The account was reportedly operated by Internet Research Agency, a “shadowy” organization in St. Petersburg, Russia, that employs “hundreds of Russians to post pro-Kremlin propaganda online under fake identities, including on Twitter,” as phrased in the New York Times.

FIRE reports that in December, @TEN_GOP shared a screenshot of Ciccariello-Maher’s “All I Want for Christmas is White Genocide” tweet, which elicited 2,100 retweets – ten times the attention that a Breitbart tweet had garnered – and found its way into USA Today.

Ciccariello-Maher later defended and explained his “satirical” tweet, stating that “white genocide” is “an idea invented by white supremacists and used to denounce everything from interracial relationships to multicultural policies,” according to Philly.com.

But by then, the damage was done: the tweet had gone viral, and its meaning was destined to be warped in the context-less land of Twitter – apparently with a helping hand from the Russian troll farm, which Ciccariello-Maher called “fucking wild,” per PhillyVoice.

In a statement, Ciccariello-Maher told Philadelphia magazine that it’s “less important to me that these trolls were operating out of Russia or anywhere else.”

“But we have been saying from the beginning that the right-wing is manufacturing outrage campaigns against left-wing and anti-racist faculty members, and these revelations only confirm that we were correct,” Ciccariello-Maher said. “Universities need to do a better job of protecting their faculty, denouncing threats, and resisting the fake outrage machine.”

This story has been updated to include comment from Ciccariello-Maher.