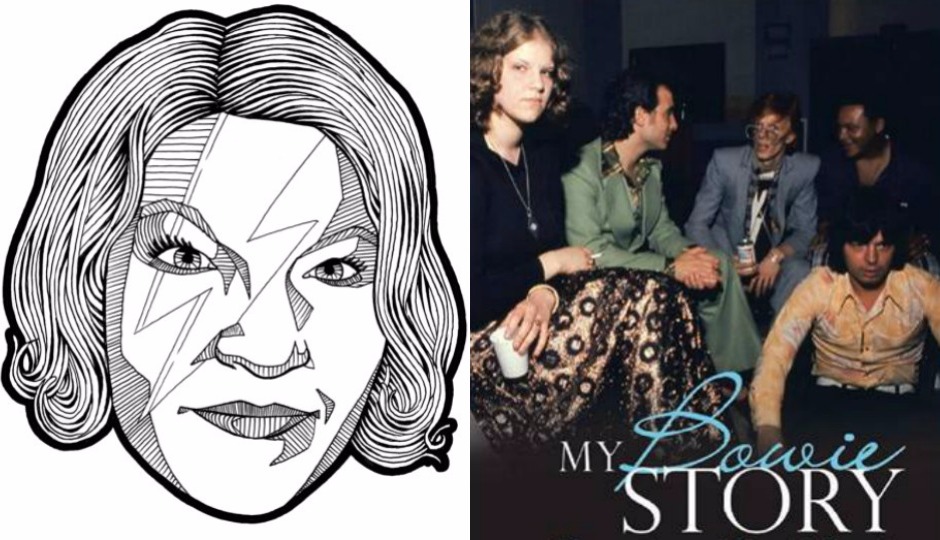 The only Bowie-centric decoration Brett really sought out was the bar’s famous jukebox, chock-full of tunes from Space Oddity, Hunky Dory, Aladdin Sane, Heroes and more, plus other albums she’s curated since the ’70s. But as for the posters and paintings of Ziggy Stardust – well, those sort of just found their way into her beloved Rittenhouse dive, located at the corner 22nd and Lombard.

If you’ve ever stopped by Doobies, you might recognize Brett’s face on the cover of a brand-new book about Bowie: “My Bowie Story,” compiled by Brett’s friend, Dale K. Perry, was published this past weekend. The literary tribute to Bowie contains hundreds of personal accounts of the musical icon, written by and for his fans.

My Bowie Story is a remarkable selection of stories told by sixty Bowie fans and collected together by Dale K. Perry https://t.co/a9G5lZocls pic.twitter.com/ZQgeFiOFMY

It’s only fitting that Brett, the Bowie mega-devotee behind Philly Loves Bowie Week, has eight stories in the book. We gave her a call on Monday to discuss its release. The interview has been lightly edited for length and clarity.

So how’d this book come to be?
In August 2016, I went up to Trenton to have dinner with one of my Bowie friends, who invited one of his neighbors over who was also a Bowie fan. She said, “I have this idea for a book,” and I told her I thought it was a marvelous idea. She wanted to have it be a collection of memories from the perspective of the fan as opposed to the perspective of a writer. There are so many books that have come out [about Bowie] that are sensationalized. Some are good and some are not, but nobody has taken a role in having the fans have a say. 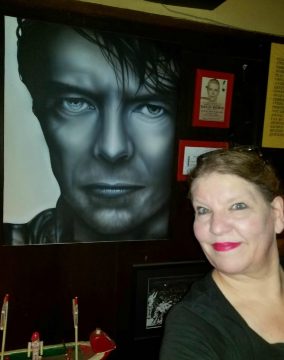 So that’s how it began. Her name is Dale K. Perry. It was her brainchild. She’s passionate about David Bowie. She self-published the book and worked very long and very hard on it. Initially when she had spoken to me about it, she said, “This is my way of paying tribute to him.” She is donating 100 percent of the proceeds after she gets her costs back to Save the Children, which was David Bowie’s favorite charity.

There are 60 writers. And I believe 85 stories. Some are tiny snippets. Some are proper stories.

What stories did you include?
I actually have eight included. I relayed the story of Sigma Sound, which is the first time that I know of that it has been published in its entirety. Do you know the story of Sigma?

In 1974, David Bowie was at the Tower Theater for a series of performances. He was staying at the Bellevue-Stratford at Broad and Walnut. He would sit on the steps and chat with everybody. One of the nights he was there, he told us he was going to be recording a new album at Sigma Sound [the album would come to be Young Americans], and that we should look for him. This was 1974 — there were no cell phones, no Internet, so we’d have to drive around and look for his car. 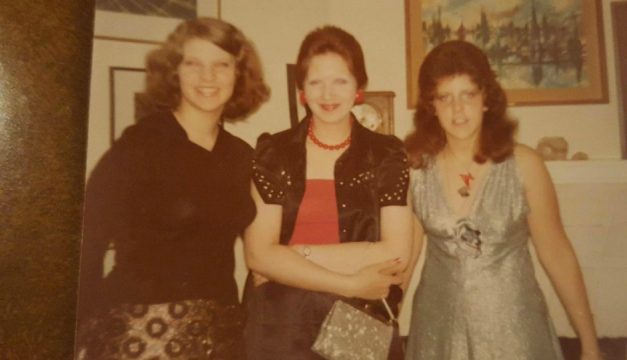 Patti Brett (left) before a show at the Tower Theater in 1974.

One night my friend called and said, “His car’s outside.” He was staying at the Barclay Hotel that time. So we sort of had a routine – we would wait for him, he would come out of the hotel, usually around 5 in the afternoon, and he’d take photos and chat with fans and get in his car and go to the studio. And then we would jump in our cars and run every red light to get to the studio before him, and we’d be waiting there when he got out again. It just sort of became a routine.

This went on for two weeks. At some point he went into his studio and said, “If you guys are out here when I come out, I have a surprise for you.”

When he came out he said, “We really appreciate everything that you’ve done in supporting the project. We want you to come up when we’re done laying tracks and listen to what we’ve done.”

And so we did. And the image that’s on the cover of the book is actually from that night.

I was so in shock. I still, to this day, cannot believe that that happened. Musicians just don’t do things like that – invite 10 people up into the studio. I know we were crazy anxious before we got up there and a nervous wreck. When we finally were upstairs, he explained what was going to happen. And he came and sat down with us and everybody was just a nervous wreck, including him.

The photographer that took the image on the front [of the book], [Bowie] had hired her to document the event. The photograph is us listening to the album, and you can see how it’s really intense, everybody is just really paying attention to the music. I love that photograph. When [the album] was done, one of the girls in the studio said, “Play it again.”

And he lit up and said, “Really?” And everybody said, “Yes!”

Was that your most significant experience with Bowie?

Absolutely. We had a reunion many years later. We got 20 backstage passes, and it was after the show at the Tweeter Center [now known as the BB&T Pavilion] in Camden in 1995, and he was going to Pittsburgh after the show, but he stayed and had a reunion with us. 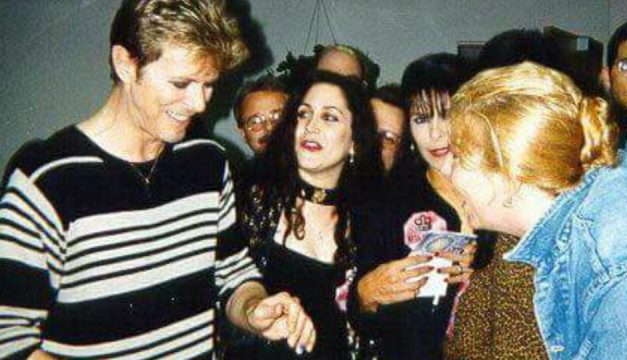 Patti Brett (right) during a reunion with Bowie in 1995.

His music is absolutely the soundtrack of my life. It’s been in my life for 43 years. I can tell you exactly what I was doing if you tell me a year and I can figure out what Bowie year it was. But in addition to that, I think the thing that struck me very early on was that he made it OK for you to be who you wanted to be, and you shouldn’t care what anyone else says.

I didn’t follow the crowd. I was a very independent child, much to my mother’s dismay. And then when [Bowie] came along, and he was so different from everything else I had encountered. He was OK with who he was. I was really young and impressionable. So it’s something that’s resonated throughout my life.

Will you stock copies of “My Bowie Story” at Doobies?
Yes. The publisher is sending them to me. I’m not sure when they’ll arrive, but I would guess sometime in the next week or so. And I will have about 25 copies. I actually already have eight requests for books. But they’re also available on Amazon and iUniverse, which is the publisher.