The country music star dropped in on Glenolden’s Thomas Schoettle since he couldn’t make either of his shows while in recovery. 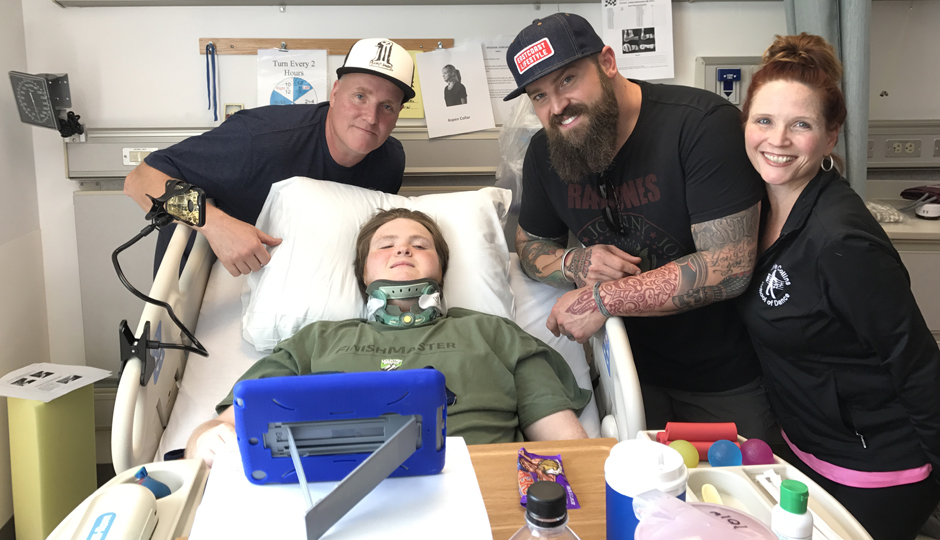 Grammy Award-winning country music artist Zac Brown found some time to make a seriously injured Delaware County teen’s day while in the area this past weekend for his band’s “Welcome Home” tour at BB&T Pavilion in Camden.

Brown paid a visit to 17-year-old Thomas Schoettle on Saturday since the Glenolden boy was unable to make either of the singer’s shows while recovering from a serious pool accident, Schoettle’s mother tells Philly Mag. The rising senior at Monsignor Bonner-Archbishop Prendergast High injured himself diving into an above ground pool at a friend’s house and has been left momentarily paralyzed.

“Thomas has been at Bryn Mawr for almost two weeks now,” Samantha Springfield-Schoettle says. “He can’t move his left leg still. His right leg is moving – it’s all coming back. His upper body is moving too but they have to re-teach him his motor skills.”

Schoettle was at Penn Presbyterian Medical Center in University City for 11 days before his current stay at Bryn Mawr Rehab Hospital. The accident on June 27 severely injured Schoettle’s neck, but thankfully he suffered no brain trauma and has a positive prognosis. Doctors are optimistic that he’ll make a full, but slow recovery.

Before the accident, Schoettle was looking forward to seeing Zac Brown Band perform live. Since the situation prevented that from being possible, the father of one of Schoettle’s friends took to Facebook and was able to get Brown’s attention without his knowledge:

Dear Zac,I know you must get many requests but I figured I'd give it a shot. My sons best friend who is 17 years had…

“Zac was super nice,” Springfield-Schoettle says. “He stayed at least 30 to 40 minutes and talked to Thomas like they were friends. I thought he would whiz in and out, but no.”

The two bonded over Brown’s Ramones t-shirt. Springfield-Schoettle says Thomas has one just like it.

I'm hoping this shows all of the video of Thomas's visitor today. Instagram cuts some of it

As for graduation, Springfield-Schoettle says she’s working with school officials to have Thomas take online classes in the fall with hopes of graduating with his class next spring.

“If I have to roll him down the aisle, I will!” Springfield-Schoettle exclaimed. “That boy is graduating!”