Dear Spirit Airlines: You Are the Worst

After 25 years in business, the “no frills” airline finally lured me on board. Never again. 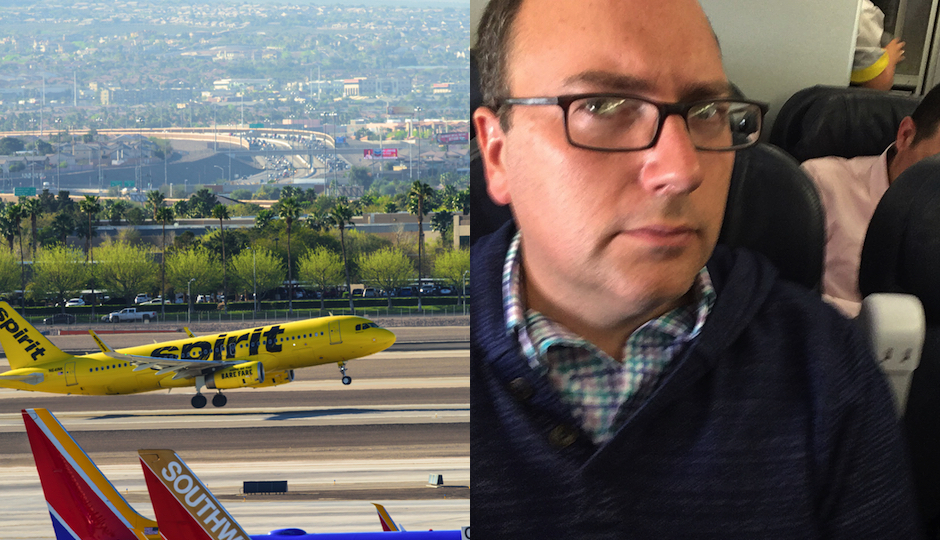 Left: iStock Photo. Right: The author contemplating his decision to board a Spirit jet.

For years now, I’ve been inundated with ridiculous Spirit Airlines advertisements pushing $9 fares and a no-frills ethos. Well, on Sunday, I finally had the, um, opportunity to see what Spirit is really all about.

And after flying Spirit from Minneapolis to Philadelphia, I can tell you exactly what Spirit is really all about: discomfort, terrifyingly flimsy planes, and a nickel-and-dime business model.

When my wife and I arrived at our seats in the 25th row of Spirit’s Airbus A319, I thought it was some sort of joke. We’re not particularly large people, and the amount of space allotted for our bodies was cruel and unusual. 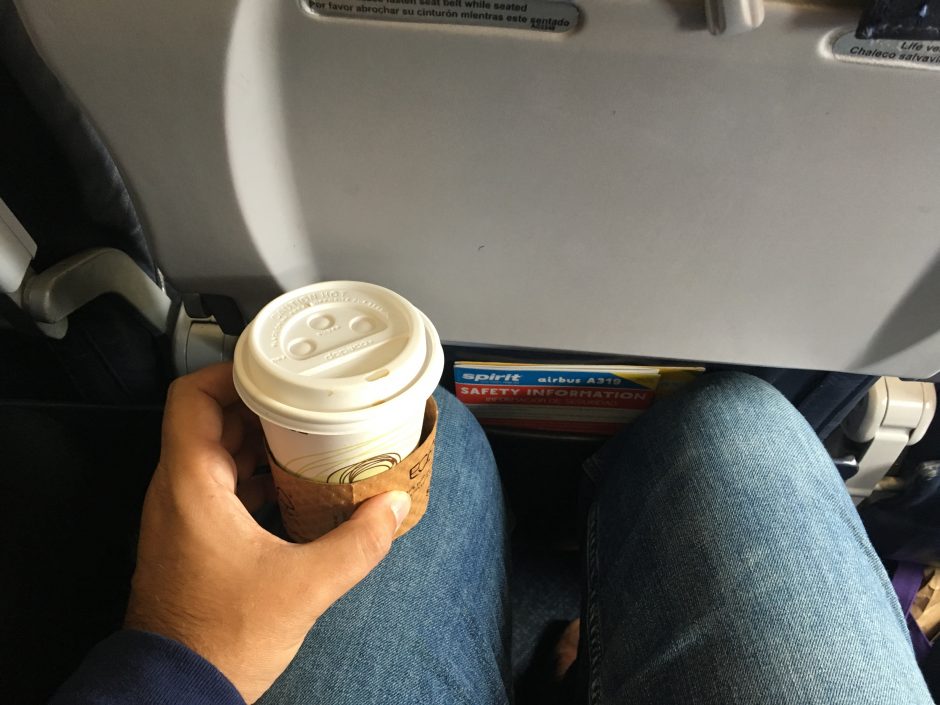 This photo doesn’t really do the situation justice, but my knees are pressed firmly into the seat in front of me, at a slight angle because I can’t actually sit straight. There’s simply no room. And I’m sitting back as far as I can go.

What we didn’t know at the time is that Spirit offers the least amount of personal space of any major airline in the United States. We learned that the hard way.

Adding to the discomfort was the temperature on the plane at the start of the trip. We sat on the plane for 30 minutes or so before we started moving anywhere, and it was just brutally hot and sticky.

“The safety card in the pouch in front of you makes for a really good fan,” a flight attendant chirped over the speaker as complaints started to roll in. So helpful.

“It’s a short flight,” texted my friend who flew the same flight the day before. “Suck it up.”

Sure, sure, sure. It takes less than three hours to fly from Minneapolis to Philadelphia on Spirit. It’s not a lifetime. I can be squished and miserable for a few hours if I have to be. And I was.

But far worse than the discomfort on the Spirit plane was the unnerving feeling that catastrophe could happen at any moment.

As we sat on the tarmac at the airport, the Spirit pilot fired up the engines. The whole plane shook fiercely, rattling the insides so much that it sounded like the plastic cabin was ready to implode. This went on for a solid 30 seconds. Passengers looked around nervously. I imagine we were all thinking the same thing. Um, is it supposed to do that?

And that was while we were still on the ground.

Once we hit some pretty serious turbulence in the sky, the noises and shaking inside the rickety Spirit aircraft reminded me of the scene in Apollo 13 when Tom Hanks is wondering if his heat shield is going to hold as he reenters the Earth’s atmosphere. We were petrified.

A colleague of mine here at Philadelphia magazine says she actually prefers flying Spirit in part because they have the youngest fleet of planes in the industry, meaning Spirit must be the safest because it’s the newest. By that logic, your family of four is much safer hurtling down the highway in a brand-new Kia Rio than in a five-year-old Volvo.

But back to reality. Why on Earth would anyone get on a Spirit plane? The only reason is that they think they’re getting a great deal. This is the entire message of Spirit’s tacky advertising campaigns: Come fly with us because we’re the cheapest. Except they’re not.

We did a relatively unscientific analysis of some common routes flown by Spirit, and what we found was that there are frequently other airlines that actually come in cheaper than Spirit. Not a lot cheaper — and, to be fair, the Spirit base fare is almost always among the cheapest options — but given how awful Spirit is, wouldn’t you rather save a few bucks and fly, say, American?

And even when it seems like Spirit is going to be the cheapest, you’d better read the fine print very carefully.

Take, for instance, a nonstop flight from Philadelphia to Las Vegas in October. The cheapest Spirit fare we could find on the given dates was $321. That might seem like a great deal compared to American’s $456.

But with the American flight, you can pick a good seat for free, and the fare includes a carry-on bag. With the Spirit flight, a comparable seat choice costs $32 each way, and they’ll get you for $37 each way if you want to bring that bag on board. (That’s all assuming that you purchase those things when you book the flight; if you add them on later, Spirit gets even more money from you.)

In other words, the $321 Spirit fare comes in at $459 — three dollars more than the American fare — once you add on the things you’ll probably want that American gives you for free.

Speaking of free, don’t expect a gratis bottle of water or bag of pretzels on Spirit. You have to pay for those, too. Meanwhile, we got complimentary coffee, some juice, and a couple of biscotti on our American flight to Minneapolis. Oh, and while American and other airlines make you pay for wifi access mid-flight, at least they have it. Spirit does not.

I’m not the only one who doesn’t like Spirit Airlines.

Skytrax is a 28-year-old UK-based company that maintains ratings of airlines all over the world, with a one-star rating for the worst of the worst and five stars for the best of the best. Good airlines love to tout their Skytrax ratings and awards on their websites and in advertisements.

So I guess we shouldn’t be very surprised that Spirit doesn’t mention its Skytrax rating anywhere. After 25 years in business as Spirit, the airline holds the dubious distinction of being the only U.S. airline on the Skytrax list of carriers with a two-star rating, nestled among Iran Air and Sudan Air. The only airline in the world worse than Spirit Airlines? Air Koryo, the state-owned airline of, yep, North Korea.

Maybe tout that in your next ad campaign. Spirit: Hey, we’re better than that airline in North Korea!