The team’s rededication to scouting in Latin America could produce big results on the field. Could it change the makeup of the fan base as well? 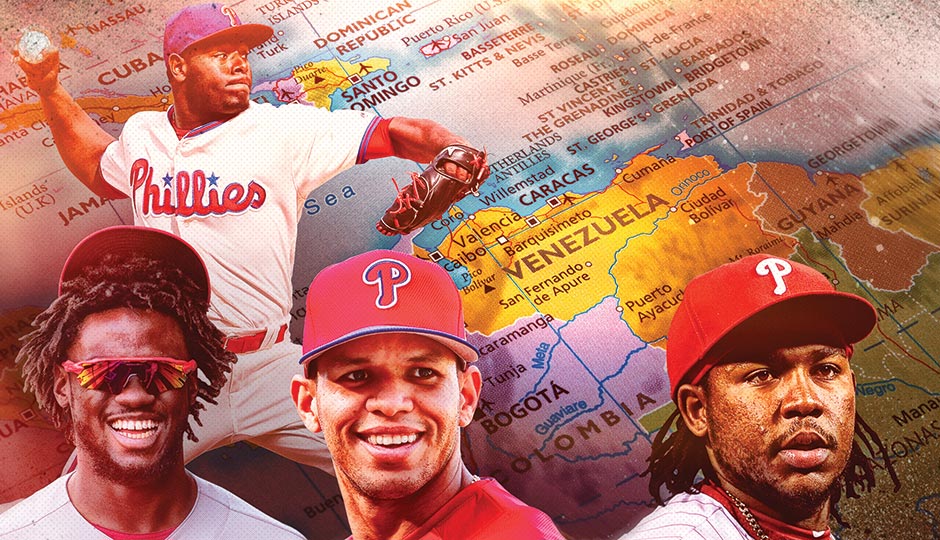 For teenage big-league hopefuls at the brand-new baseball academy the Phillies opened (with the Minnesota Twins) in the Dominican Republic this January, the box score from the home team’s April 26th victory over Miami had to provide inspiration.

That makes sense. As of May 1st, 12 members of the team’s 25-man roster were of Latino descent. It’s a huge step forward for a franchise that abandoned a once-thriving Latin American scouting operation and by the 1990s had precious few Latinos in its entire system. A renewed commitment to developing Latino players has bumped up the Phillies’ yield from fertile fields that produced nearly a quarter of the players on 2016 MLB rosters.

The Phillies’ academy, in the beach town of Boca Chica, features first-rate facilities and will feed a farm system already loaded with Latino prospects. The academy teaches not only baseball, but also English and life skills that improve players’ chances of navigating the road to the majors.

“Our program has gotten to the point where it feeds itself,” Jordan says. “The players communicate with each other. They see Freddy Galvis, César Hernández and Maikel Franco … and know they came through our system.”

Converting that growing Latino on-field presence to increased fan participation within the Philadelphia-area Latino community is the next challenge. Considering that the team has seen its attendance drop considerably thanks to steadily declining win totals, it makes sense to focus on a burgeoning population, no matter how many walls Donald Trump tries to build. Between 2000 and 2010, the number of Hispanics grew by 46 percent in Philadelphia proper and 58 percent in the tri-state region that includes Atlantic City, Wilmington and particularly Berks County.

The Phillies host an annual Latino Family Celebration night, provide Spanish-language radio broadcasts, and will air five games this season on Telemundo. According to Michael Harris, the team’s director of marketing and special projects, the team’s strategy is evolving to include new Spanish language Twitter (@LosPhillies) and Facebook (Phillies de Filadelfia) accounts, with a Spanish website expected in 2018.

Bill Kulik, who does play-by-play and analysis on the Phils’ Spanish-language broadcasts, says there are more ways to boost Latino interest. One is promoting the team’s Secondary Audio Program option (in this instance, Spanish) on broadcasts more enthusiastically. And the Phillies could help sponsors communicate with the various components of the Latino diaspora.

Kulik would like to see the Phillies hire a dedicated marketing rep for the Latino community but admits that a blanket approach would be problematic, given the community’s diversity. He confesses to using liberal amounts of “Spanglish” during broadcasts to avoid vernacular that might make fans think he favors one Latino nationality over another.

Ultimately, on-field performance overshadows marketing. But if the Phillies’ strong Latino presence spurs renewed success, the prospects for outreach will grow. “The potential star power of some of our current Latino players,” Harris says, “presents an opportunity for us to intensify the connection between the organization and the Latino community.”

Not to mention with those kids in Boca Chica.

Published as “The Phillies’ Latino Uprising” in the June 2017 issue of Philadelphia magazine.