The Best Thing That Happened This Week: The Awakening of Aaron Altherr

Thank God for the kid. 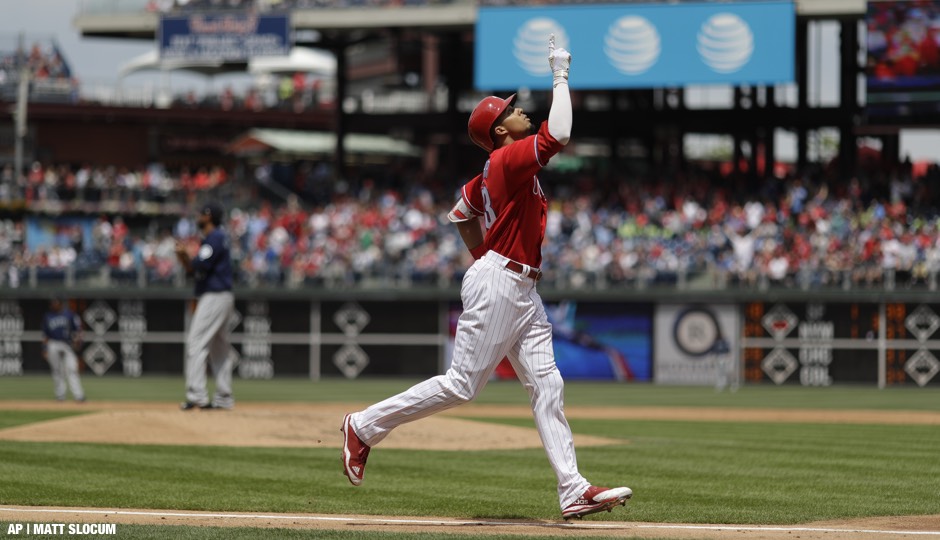 Philadelphia Phillies’ Aaron Altherr in action during a baseball game against the Seattle Mariners, Wednesday, May 10, 2017, in Philadelphia. (AP Photo/Matt Slocum)

Some weeks are so full of hope and wonder that we have a hard time choosing amongst all the Best Things That Happen. Then there are weeks like the one we just had. While the Republic crumbled around us, we stood in the rubble and said to ourselves, “Oh, yeah, right, Best Thing … ” And it’s not as if we could turn to our sports teams to save us (though the Union did win their second straight game). The Phillies got spanked, 10-9 and 11-6, in their abbreviated midweek stand against the Mariners (in the midst of six straight games against the Nats; who makes up these schedules?). They also got beat on Saturday night in the bottom of the ninth by a walk-off homer by—wait for it—Bryce f’ing Harper.

On the other hand — and, yeah, we’re digging deep here — left fielder Aaron Altherr is tearing it up these days. In Wednesday’s game he smacked two home runs and became just the third Phil since 1929 to hit three-run home runs in three straight games. (His company? Mike Schmidt, in 1981, and Whiz Kid catcher Andy Seminick in 1949.) Through Wednesday, he’d had nine extra-base hits in eight games, prompting coach Pete Mackanin to marvel, “He’s turned into a monster.”

Oh, and we got to see Carlos Ruiz again. You see? There’s always something, if you dig deep enough.