The USCGC Tamaroa is the latest addition to an artificial reef located nearly 30 nautical miles off the shoreline. 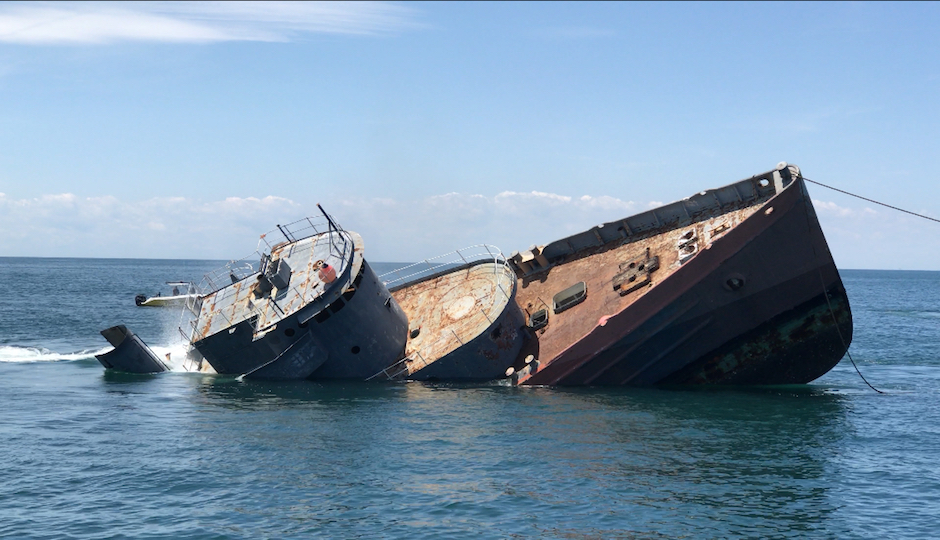 A decommissioned Coast Guard cutter famous for its service in World War II and 1991’s deadly “Perfect Storm” off the coast of Massachusetts was laid to rest on Wednesday as it joined the cadre of sunken ships that comprise the Del-Jersey-Land Inshore Reef below the depths of the Atlantic Ocean.

“We are proud to partner with Delaware in making this deployment a reality and giving this venerable vessel a chance at continued service, this time of a different nature,” NJDEP Commissioner Bob Martin said in a release. “Anglers of all ages will now be able to visit this spot for many years to come to enjoy the varied marine life this ship will attract. Sport divers will also have a unique opportunity to explore the Tamaroa’s decks, bulwarks and passageways, perhaps soaking in the ship’s storied history in the process.”

The 74-year-old boat had a prominent role in author Sebastian Junger’s best-seller The Perfect Storm, as well as the 2000 film of the same name starring George Clooney and Mark Wahlberg.

The movie depicts the harrowing final hours of the crew aboard the commercial fishing vessel Andrea Gail, and the Tamaroa battled the same catastrophic storm to rescue three people from a wayward sailboat along with five crew members from an Air National Guard helicopter that went down at sea.

Before it became the Tamaroa, the vessel was a U.S. Navy fleet tug boat dubbed the USS Zuni. The Zuni first launched in 1943 and helped support landings by the U.S. Marine Corps during the Battle of Iwo Jima in 1945. It is believed to be the last surviving vessel that directly assisted in those operations.

After 48 years of Coast Guard service, the Tamaroa was officially retired in 1994. Plans to restore the ship as a museum were ultimately scrapped due to its advanced age.

“Not long after the sinking, the fish will start to come outside her hull and decks to feed,” Delaware reef coordinator Jeff Tinsman said in the release. “Within a few weeks, blue mussels, sponges, barnacles and soft corals will attach themselves to the structure, and in about a year the reef will be fully productive – for fish and anglers alike.”

The Del-Jersey-Land Inshore Reef was established a decade ago specifically for military vessels. It is jointly managed by the states of New Jersey, Delaware and Maryland.