Owens: White allies’ interest in trying to desegregate BLM Philly meetings is antithetical to what allyship is about. 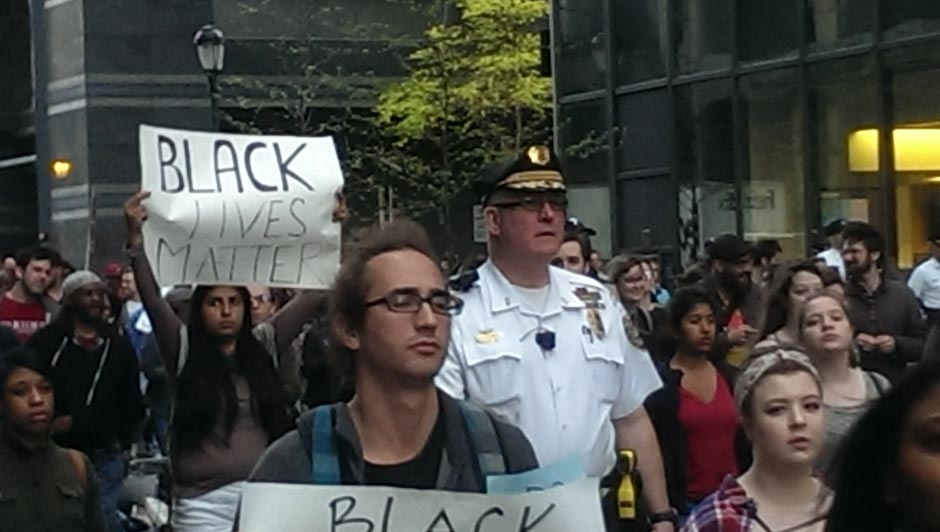 Black Lives Matter Philly at a protest in April 2015.

I consider myself an intersectional feminist. Despite being a man, I personally stand as a proud ally for women’s rights and support their equal upward advancement in society. Within activist spaces in some of Philly’s feminist circles, there are moments in which male allies are encouraged to listen and not weigh in. Phrases such as “don’t occupy too much space” or “amplify marginalized voices” not only remind me of my privilege as the opposite sex in such arenas, but also set legitimate terms of agreement.

Sometimes, there are portions of the conversation during which men are asked to leave due to the sensitivity and privacy some women may request. As an ally, I have no other choice but to respect those requests given that I recognize that support to advance women within their movement should center them and not myself. Any impediment that I might personally pose to their demands for a safe space in which women can freely express themselves would be selfish and further destabilize their power within their own movement — which would be the absolute antithesis of being a feminist.

Which brings me to the recent ridiculousness of criticism surrounding Black Lives Matter Philly (BLM Philly) having “black only” meetings for their members. Last week, BLM Philly, the only recognized affiliate of the national Black Lives Matter organization in Pennsylvania, posted a tweet informing members that their upcoming April 15th meeting was “a black-only space.” During the first 36 hours after the initial post, BLM Philly received and responded to public outcry on social media and right-wing news organizations.

Even some local black journalists publicly disagreed with BLM Philly’s position, with one columnist stating, “That would not be me [having a black-only meeting]. Nor would I be the one standing in the doorway blocking white folks from coming in. I’m old school.”

But perhaps such an “old school” sentiment ignores the current necessity of holding such gatherings. While most news outlets that criticized the activist group characterized its decision as “banning whites,” they clearly ignored those for whom the meeting was actually intended: black people. I found it ironic that many critics who ran headlines using the term “Black Lives Matter” instead seemed more concerned about the white lives who aren’t able to attend.

Situations like this further highlight how allies can potentially do more harm than good for an organization they claim to care about. Whether it is sitting out during a feminist meeting to allow women their safe space to mobilize or giving black people their outlet to empower one another individually, allies, no matter what their personal preferences are, must respect the demands of the group. When you’re an ally, it’s not about you. The entire premise of having the back of those who feel marginalized is to respectfully listen to their concerns and help amplify their voices.

Just as it isn’t sexist for women to ask men to respect their privacy during sensitive discussions, it’s not racist for black activists to request that they are allowed separate space to connect. Oppression strikes the moment allies attempt to challenge and regulate the power of marginalized individuals — you’re no longer an ally at that point.

And for those who might suggest that these requests would “turn off” allies interested in supporting diverse movements, I would argue that such allies must not be supporting for the right reasons if they’re so easily dissuaded. In a moment in which marginalized groups in this country face even graver political threats to their freedoms, more energy should be shifted on how to strengthen these movements rather than chastising them for resisting further oppression.

Allyship is having the humbleness to check your privilege and power at the door before demanding that you should enter through someone else’s.