And, naturally, people are now leaving nasty reviews on the bar's Facebook page and calling for a boycott. 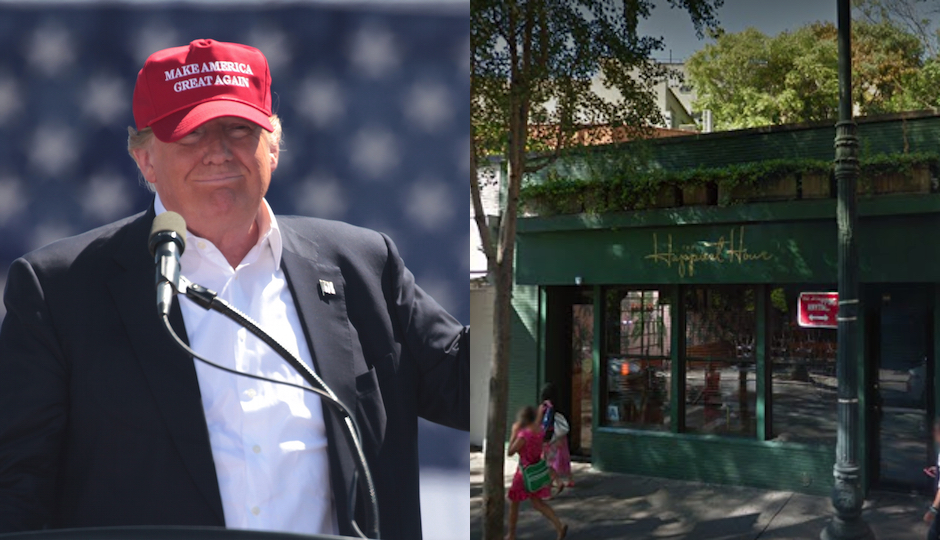 Back on January 28th, Philadelphia resident Gregory Piatek went to New York City to hang out with some friends and pay a visit to the 9/11 Memorial Museum. Piatek and company wound up at The Happiest Hour, a bar in the Village, for some food and drinks. But there was a problem: He claims the bartenders wouldn’t serve him because he was wearing one of those Donald Trump hats that reads make america great again.

According to allegations contained in a civil suit filed by Piatek in New York City against the bar and its owner, Piatek and his friends sat at the bar for 15 or 20 minutes without any service while customers on both sides of his group received drinks.

One of his friends spoke up, and the bartender allegedly responded, “Is that hat a joke?”

“So, wait, you have been ignoring me just because of my hat?” Piatek says he replied.

According to the lawsuit, the bartender said yes.

Piatek, who according to his recently deleted LinkedIn profile is an accountant for Deloitte & Touche, says it was at this moment that he realized that some of the bartenders and managers at the Happiest Hour were wearing stickers that read trump … idiota, calling the president an idiot. He believes that those bartenders and managers were Hispanic.

After the exchange with the first bartender didn’t go so well, Piatek says he decided to wait and see if another bartender would wait on him, someone “more accepting of other people’s creeds and beliefs,” as the lawsuit puts it.

Eventually, another bartender came over. But, according to the suit, it wasn’t to get him a drink. Piatek claims that she called him a “terrible” person and then blatantly refused to serve him.

Piatek located the manager, who said that he would telephone the owner of the bar. After the manager made a phone call, he returned and allegedly said, “I spoke directly to the owner and the owner told me that anyone who supports Trump or believes what you believe is not welcome here! And you need to leave right now because we won’t serve you!”

And then, claims the lawsuit, bouncers escorted Piatek and his friends out of the building.

Piatek filed his lawsuit last week, accusing the Happiest Hour of intentional infliction of emotional distress and discrimination, among other offenses, and seeks unspecified damages.

After the lawsuit was first reported by the New York Post, the Happiest Hour saw a deluge of negative comments and one-star reviews on its social media pages. Some are calling for a boycott of the bar.

Wrote one such commenter on the Happiest Hour Facebook page:

Shame on you for not respecting or tolerating people who have views or fashion choices that you don’t agree with. I thought the Left was supposed to be tolerant and open minded! Why is a hat that says “Make America Great Again” such a threat to your establishment that you’d refuse service to someone wearing one? Shame on you. You are intolerant and closed minded and disrespectful to people who have different points of view.

According to Yelp, the Happiest Hour page on that site is being monitored for activity related to media reports on Piatek and his lawsuit.