We spoke with the popular lesbian attorney about LGBTQ racial discrimination and her new advocacy project, “Caravan of Hope.” 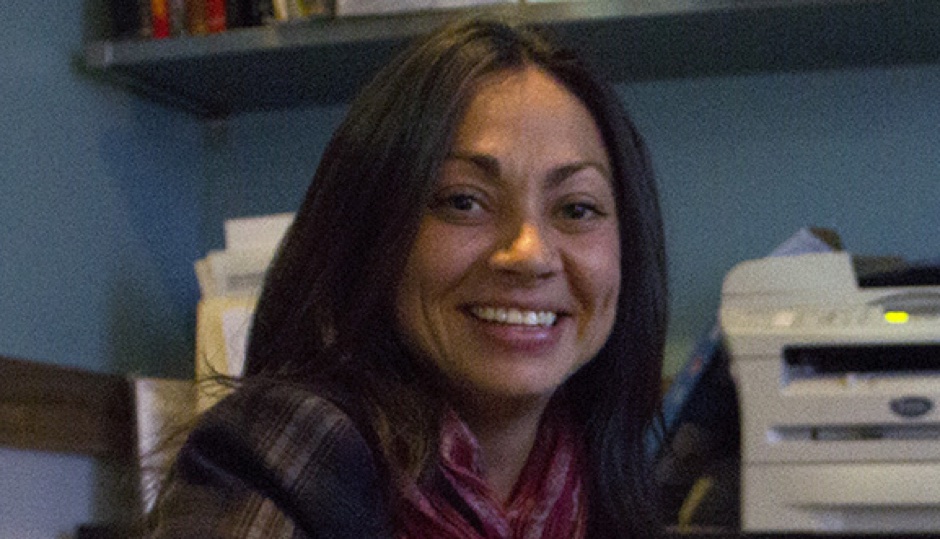 Angela Giampolo is a LGBT legal expert and founder of Philly Gay Lawyer and Giampolo Law Group. We spoke with the popular local lesbian attorney on her thoughts on Gayborhood racism, LGBT discrimination, and her latest advocacy endeavor, “Caravan of Hope.”

Tell us a little bit about yourself.
A lot of people don’t realize this, but despite my very Italian name and appearance, I’m a dual citizen of the U.S. and Canada, and moved to Québec where my mother is from when I was very young. I identify totally as French Canadian, to the point that I’ve never experienced the seven fishes! Another fun fact — despite being 4’11”, I played basketball overseas and in college. It wasn’t until I blew out both knees and couldn’t play basketball anymore that I looked to transfer from Atlanta and ended up in Philadelphia. I also didn’t know that I had a brain or that I wanted to go to law school at that point. People who knew me then joke that they are shocked that I am on “this side” of the law. So, I started exploring my interests once I moved to Philadelphia. I interned everywhere I could: Women Against Abuse, Women’s International Peace and Freedom, Center for Gay and Lesbian Civil Rights (the old Equality PA), Women’s Law Project, and so on.

I didn’t start out planning to be Philly Gay Lawyer. Originally I thought that I would be an international human-rights lawyer, and I even moved to Beijing to work in human trafficking and obtain a certificate in Chinese law. From there, I moved to Tanzania and worked at the United Nations for the International Tribunal for the Rwandan genocide. After those experiences I quickly realized that to work in those areas changes a person completely and in a way that I wasn’t comfortable with. After several months of being back in Philadelphia, I had many interactions with LGBTQ friends where they told me about legal issues they were having and every single one of them related back to being gay. One day it dawned on me to create a law firm geared toward the LGBTQ community for all of our legal needs, not just the ones that have to do with being LGBTQ – we own businesses, we need a will, we buy property, etc. And so, Giampolo Law Group/Philly Gay Lawyer was born.

You are a well-known lesbian attorney in Philly. As a legal expert, what is your perspective in regards to the city addressing racial discrimination in the LGBTQ community?
I won’t answer the question as a legal expert, because before that, I am member of the LGBTQ community in Philadelphia, and since 1999, I have fallen in love with this city and our Gayborhood. We’ve all acknowledged that racism exists in Philadelphia – that has never been at issue. Just a few months ago, I asked my tall, white, blond assistant to go buy something and gave her my credit card, and she was able to do so without being ID’ed. The next day I sent my African-American intern to return it, and he was ID’ed. We’re only recently willing to acknowledge that the same racism permeates our Gayborhood, and I am deeply saddened by it and disturbed in part at how it was handled by the city. We are one of the few cities in the country that have an LGBT liaison to the mayor with the authority a cabinet post brings, and yet Nellie Fitzpatrick did not address what was happening the way I envision the leader of the Gayborhood should. In her defense, Gloria Casarez left massive shoes to fill, and I don’t know how many times over the last year or so that I’ve thought, “What Would Gloria Do?” With that said, I love what the Philadelphia Commission on Human Relations and Rue Landau did by subpoenaing all of the bar owners to attend the town-hall discussion. I received a ton of calls on that: “Hey Ange, is this even legal?” It wasn’t about the legalities of it, though, and I think the power behind the message was not just heard by the bar owners but by the entire Gayborhood.

Lastly, I love the way the activists in the community have handled the racial discrimination. From last summer through today, there is a dialogue that is going on about racism in our Gayborhood that is not going to go away — that’s because of people in our community that won’t let it. That’s where true change happens, as is evidenced by our new director of LGBT Affairs starting next week – Amber Hikes. I’m happy to have her back in Philadelphia as a friend, but more important than that, I am thrilled to have her heading up what I deem to be the most important city position as a member of the LGBTQ community, other than the mayor, because it will be her job to make sure that all of our interests are protected and promoted within Philadelphia government.

From your viewpoint, is there another legal aspect the community is overlooking or should consider?
This is going to be the most boring answer of the five questions, but it’s a lawyerly response! People are not aware of an unusual phenomenon going on in the legal system right now, and specifically fundamental constitutional questions facing judges based on changes in the law post-Obergefell on a federal level and statewide since Whitewood v. Wolfe. The courts face an unprecedented legal quagmire given the piecemeal way in which civil liberties were achieved by the LGBTQ community over the course of 40 years, and given that 1,138 state and federal rights are bestowed upon married people, with the recent recognition of marriage equality in Pennsylvania, so many issues of first impression have presented themselves involving every aspect of people’s daily lives, including questions surrounding divorce, whether to apply common-law marriage, to recognize civil unions, pensions, trusts, estate and fiduciary appointment disputes as well as adoption, custody, and parentage disputes and issues solely impacting transgender individuals.

For example, Whitewood v. Wolfe was decided in May 2014. Wonderful; people got married and others who were “wed-locked” and couldn’t get divorced for years were able to do so because Pennsylvania finally recognized marriage. Shortly thereafter, Pennsylvania courts decided that while we recognized marriages, we weren’t given the authority to recognize civil unions, so another case was filed and hundreds of people have remained stuck in their “marriages.” That case was just decided four months ago, and I just received the last of my granted civil union dissolutions last week.

You recently launched “Caravan of Hope,” a traveling legal LGBTQ program. What inspired you to take on this initiative and how do you plan to execute it?
Caravan of Hope is a mobile RV that will take the work that Philly Gay Lawyer does in Philadelphia on the road (literally) to help underserved populations LGBTQ people in marginalized and rural areas; a pro bono law firm on wheels. I don’t have to tell you, but there is a lot going on in the world today. People tend to focus on the Trump administration when they think about the problems of today, but the harsh truth is that these problems already existed in America: racism, anti-Semitism, misogyny, transphobia, etc. As for LGBTQ-specific realities, there are 29 states that do not have any laws to prevent people from discrimination based on their sexual orientation — that’s more than half of our country that does not protect its LGBTQ citizens from experiencing discrimination in employment, housing, by state officials, and as a result, not thrive to the extent that their heterosexual counterparts do.

So, all of the above is what led me to create Caravan of Hope. I’ve been helping underserved populations my entire career, but only those that approach me. This time, I’m seeking them out! Right now, seven days later, I am still creating the board of directors. I am a white, lesbian attorney wanting to help a population that I am not a part of, and as such, I will be deliberate in creating a team of people that will help me bring this mission to fruition in the best possible way. Also, we will engage the help of LGBTQ agencies across the state to identify three areas in Pennsylvania (starting in Pennsylvania, but the goal is to broaden the reach) whose LGBTQ underserved communities are most in need and visit them three times in the course of summer 2017. Once the towns are identified, we will pay canvassers to go to those areas in advance of our arrival and let them know that we are coming and when. We won’t park the RV directly in the small town for safety and confidentiality reasons, so they have to know in advance where we will be located. Our goal is to provide substantive and impactful pro bono legal services over the course of three visits (and emails and phone calls), such as uncontested divorces, adoption petitions, and transgender name changes and gender marker changes on their legal documents, immigration, criminal defense assistance, and basic estate planning documents.

Everyone has to do their part to protect one another so that equality and justice will prevail. I feel strongly that my part in all of this is to provide pro bono legal services and bring a ray of sunshine to those who need it most, so I am bringing my services on the road to those people in what I like to call a Rolling Resistance.

In light of all that has recently happened in the LGBTQ community politically, what is one piece of advice you would like to give those who take a cynical view of progress?
Well, I’m lucky to be marrying a therapist because I’m constantly challenged to see the silver lining and try to turn lemons into lemonade, hence the Caravan of Hope. With that said, I would tell people to look at not just U.S. history but world history and focus on how groups of people subjected to systemic oppression have historically risen and changed or dismantled those systems. Our systems of racism and homophobia have been changing over the last decade – how could it not with the election of Barack Obama. But like so many people have said post the election, we are witnessing a “black-lash” to Obama’s administration as well as a backlash against all progress toward equality that we’ve made.

I would also tell anyone who takes a cynical view to try and focus on the positive that is coming out of this – history is being made right now. People are marching, protesting, and standing up for people they never felt a passion to help before. I remember saying after the Orlando Pulse shooting that the NRA just won an opposing force that they weren’t prepared for, because the LGBTQ community suddenly became passionate about gun control. Today, every political move against a marginalized group is met with a huge amount of resistance from the majority of Americans and people are starting to realize that they have to be involved in protecting each other from any induced harm.