Jackie Robinson’s First Contracts Will Be on Display in Philly

Valued at $36 million, Jackie Robinson's first contract with the Brooklyn Dodgers will be exhibited at the Constitution Center until June 5th. “For the performance of the Player’s services and promises hereunder the Club will pay the Player the sum of FIVE THOUSAND DOLLARS ($5,000.00) for the season.”

The salary may not sound impressive today, but the year was 1947. And the signature on the next page of the contract is even more impressive: Jack Roosevelt Robinson.

Beginning Thursday, Jackie Robinson’s original professional baseball contract with the Brooklyn Dodgers will be on display at the National Constitution Center for two weeks. The contract is on what its owners call a “Freedom Tour” of the United States, and it will make its longest-scheduled stay in the City of Brotherly Love. Robinson’s first minor league contract with the Montreal Royals, signed in 1946, will also be on display alongside it.

The contracts will be on display as part of the Center’s primary exhibit, “The Story of We the People,” until June 5th. Regular admission is $14.50 for adults; the museum is free on Memorial Day due to a grant from the John Templeton Foundation. 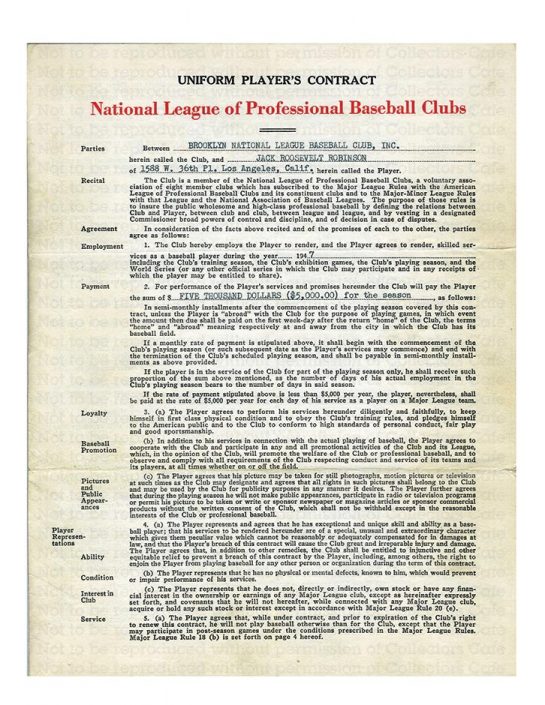 One clause of the contract reads: “The Player represents and agrees that he has exceptional and unique skill and ability as a baseball player; that his services to be rendered hereunder are of a special, unusual and extraordinary character which gives them particular value which cannot be reasonably or adequately compensated for in damages at law, and that the Player’s breach of this contract will cause the club great an irreparable injury and damage.” (Courtesy of Collectors Cafe) 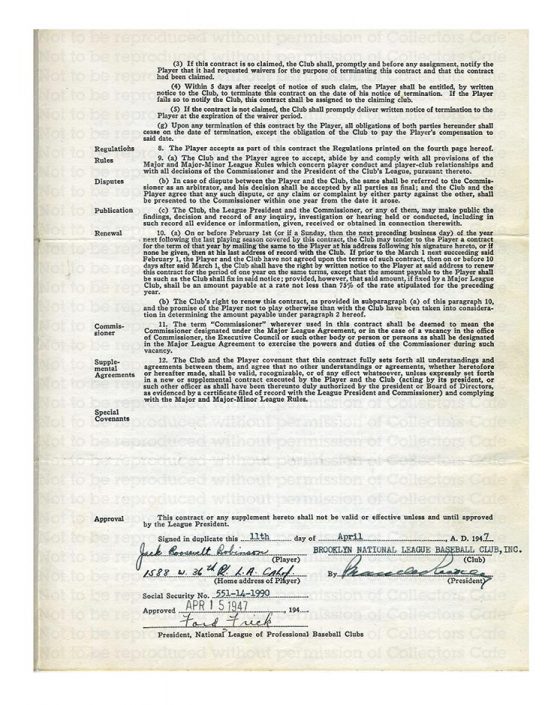 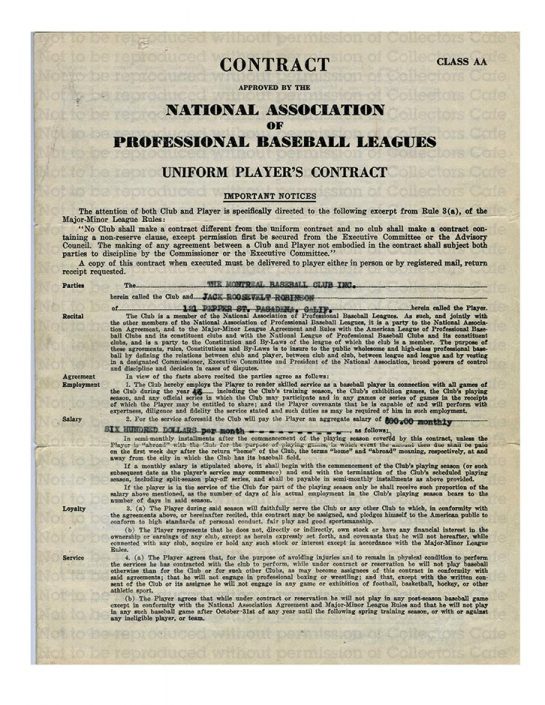 Robinson’s contract with the Montreal Royals, his first year in professional baseball, paid him $600 a month. (Courtesy of Collectors Cafe) 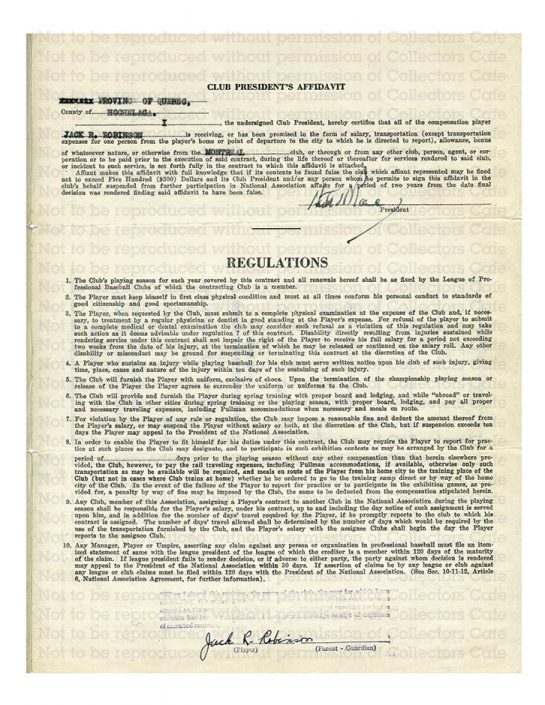 The contract reads: “The Club will furnish the Player with uniform, exclusive of shoes.” (Courtesy of Collectors Cafe)

The contract came to the Constitution Center by way of a company called Collectors Cafe, a start-up social networking and sales site meant for collectors in many fields. Its CEO/founder is Mykalai Kontilai, the former owner of the public television staple Nightly Business Report with a long history in educational television. He acquired Robinson’s first two contracts from a seller he declined to name in 2013. The contracts were originally in the possession of “a former historian for the Borough of Brooklyn,” he said.

Seth Kaller, a Penn graduate and rare document expert who once authenticated an Abraham Lincoln-signed copy of the Gettysburg Address that sold for more than $2 million, assists the museum in curating its displays.

Because the center is not a collecting institution, it must rely on loans and partnerships for many of the objects it puts on display. Constitution Center COO Vince Stango says Kaller put the museum in touch with Kontilai, who is doing a sort-of barnstorming tour of the country with the Robinson contracts.

“We like to be flexible and nimble and jump on these kinds of opportunities,” Stango says. “The exhibit world can be slow. It can take a long time for a major exhibit to come to fruition. It can also take a lot of investment. And this is something we were able to put together in a few weeks. And it will be beautiful and will tell the story through the documents. I think it will be very impactful for visitors young and old who will come to check it out.”

Kontilai said he had the contract valued at $36 million by an appraiser, and its authenticity verified by several experts including Kaller. He told ESPN he has a letter from Jackie Robinson’s widow supporting the eventual sale of the contracts. He believes it is the only copy of Robinson’s Dodgers contract. The team may have another copy, but its whereabouts are unknown.

“We looked at this as a major responsibility for us — to have these resurface,” Kontilai told Philadelphia magazine. “Many people consider these to be the founding documents of the modern civil rights movement.” Despite their value, Kontilai trusted the citizens of Philadelphia: He carried the contracts, in their heavy, padded briefcase, while getting a roast pork sandwich at DiNic’s in Reading Terminal Market earlier this week.

Robinson’s contracts first went on display on April 18th in Times Square. (As evidenced in this photo, both Al Sharpton and Master P were there.) “Their effect on American history, and even the world, transcends the bounds of sports,” Kaller writes in his appraisal of the contracts. “Jackie Robinson’s contracts are documents of freedom in the same vein as the Declaration of Independence, the Constitution and the Emancipation Proclamation.”

The contracts have been on display previously at the New York Historical Society and at a Dodgers-Blue Jays game in Toronto. The Constitution Center’s two-week residency will be the longest scheduled stay for the contracts so far. Kontilai said he’s “announcing things a week at a time,” but mentioned interest from the Nationals and Braves. He also said they would be put on display in Chicago and Los Angeles, among other cities.

Robinson signed with the minor-league Royals in 1946 and led the International League in hitting with a .349 average. The Dodgers bought his contract on April 10th, 1947, and inserted him into the starting lineup at first base.

“As for any players resenting him, I’ll tell you to look at the record again,” Dodgers acting manager Clyde Sukeforth told the press at the time. “Last Spring, there were several Montreal players who frankly didn’t like the idea of playing with him. But he’s such a fine fellow and outstanding player, they all grew to like him.”

Robinson faced opposition from some opposing fans and players, too, but an incident in Philadelphia is perhaps the most notorious. Manager Ben Chapman unleashed a string of racist invectives at Robinson, hoping to throw the rookie off his game. City Council passed a resolution earlier this year officially apologizing to Robinson and his family for the treatment he endured here.

Robinson hit .297 his first year and won the Rookie of the Year Award. He won an MVP two years later, won a World Series in 1955 and finished his career with a .311 average. He was elected to the Baseball Hall of Fame in 1962.

“Jackie Robinson’s arrival in Major League Baseball really was a precursor for a number of activities that ultimately led to the civil rights movement,” the Constitution Center’s Stango says. Robinson broke baseball’s color line in 1947. Truman signed the order to desegregate the military a year later. Brown v. Board of Education was in 1954. The Civil Rights Act was in 1964.

“Documents can be difficult for audiences to connect with,” Stango says. “But … so many of us know the story of Jackie Robinson. It’s a unique document that can connect with different audiences — maybe audiences who wouldn’t necessarily want to come to the National Constitution Center.”

The contracts’ tour of the country is also part of a promotion for Collectors Cafe. The site, Kontilai says, will be a social network for those interested in what he calls the $250 billion a year collecting industry. Only dealers can sell on the site, which will offer free appraisals and connect those with objects to sell with dealers.

The site has also invented, in Kontilai’s words, commodity insurance. Insurance firms will underwrite all collectibles offered for sale on the website. “We call it ‘The Revolution’ because we really believe we’re launching a revolution here against fraud,” he says. “I believe collecting in a lifestyle. We’re creating what I consider to be the first lifestyle brand for collectibles.”

Kontilai said the site has been in development since 2007. The New York Times reported on it in 2010, saying that it had “yet to get off the ground.” He says the document was a nice way to give his site a major launch, but that he would have purchased it anyway.

“I’m a radical, serial, maniacal collector,” he said. “I collect about 30 different things — and I’m not kidding — very passionately: From Rolex watches to baseball cards to comic books. … We decided we were going to buy them and only sell them at the right time to either an institution, a foundation, or an individual who would at least loan them out and keep them available. So we ended up purchasing them, and I’m very happy we did.”

The Robinson contracts will be on display at the Constitution Center from Thursday, May 26th, through June 5th.

“I think it is just a perfect example of how we as a public institution can educate, can entertain, can connect with the public in a way that we aren’t always able to do,” Stango says. “It’s an incredibly important document for us to display.”