From baked Argentinean empanadas to the deep-fried corn pockets of Venezuela, Philadelphia’s restaurant scene has an empanada for everyone. 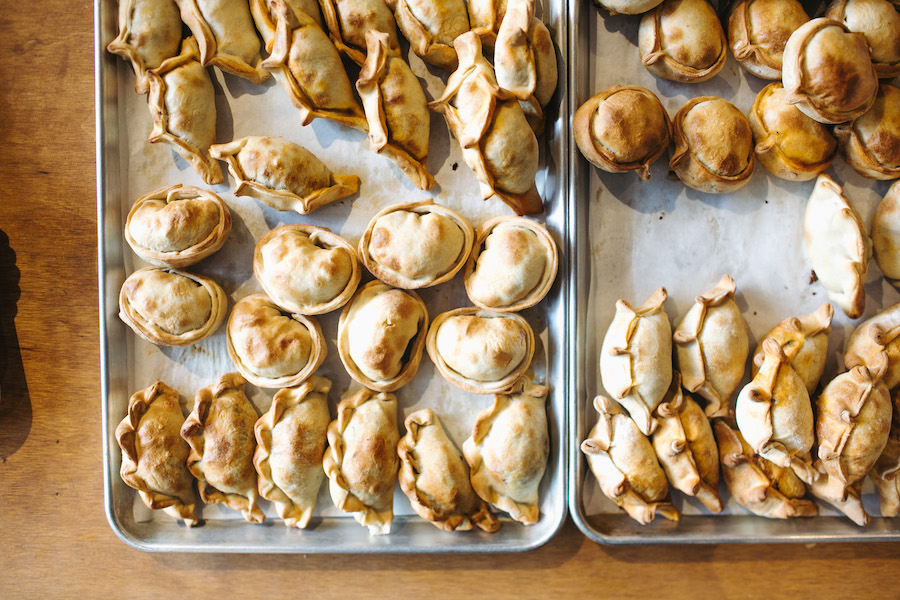 Empanadas come in an almost endless array of styles, from the crimped and baked Argentinean styles to the fried, corn-based ones in Colombia and Venezuela. And eating through this city’s diverse roster of empanada specialists is a little like taking a mini culinary tour of South and Central America. Here’s where to start.

Jezabel’s Argentine Cafe, West Philly
Jezabel Careaga has made a name for herself in this city with her Argentinean-style empanadas. They’re freshly baked daily with different fillings: spicy beef, leeks and cheese, lentils, chicken, and more. They also sell pre-made empanada wrappers and hold regular empanada classes if you want to learn for yourself.

Empanada Alley by Cuba Libre, Old City
Chef Guillermo Pernot developed a small menu of sweet and savory Cuban-style empanadas that are available for takeout and delivery only out of the back of Cuba Libre’s Philadelphia location. Options include a vegetarian empanadas with black beans and plantains, a sweet guava and cream cheese empanada, and many more.

Empanada Box, Northern Liberties
Restaurants in Philadelphia are constantly putting cheesesteak fillings inside things that aren’t cheesesteaks, which we’re generally against. But in the case of Empanada Box, it totally works.

A post shared by Sazon Restaurant and Cafe (@sazonphilly)

Sazon, Callowhill
Sazon serves Venezuelan empanadas, which are made with a corn wrapper, as opposed to the wheat dough used to wrap their Argentinean and Cuban counterparts. Served with salad and a spicy tomato sauce, they make an excellent dinner and an even better brunch.

Amy’s Pastelilo’s, pop-ups
Amaryllis Rivera-Nassar launched Amy’s Pastelillo’s in 2018 as a tribute to her mother and her love of Puerto Rican home cooking. While they’re not the same as empanadas, pastelillo’s are a Puerto Rican fried turnover that she stuffs with creative fillings like guava barbecue pork, classic beef picadillo, sweet plantains, and more. Find her at pop-ups across the city.

Bar Bombon, Rittenhouse
Bar Bombón is a reminder that empanadas are an excellent drinking food: pair an order of their (vegan) Philly steak empanadas with a round of their mezcal and tequila-based cocktails to see for yourself.

El Bocado, Queen Village
El Bocado serves Mexican, Honduran and Salvadoran food — don’t miss their pastelitos, the Salvadoran version of an empanada made with a crisp, chayote-seasoned corn wrapper and filled with your choice of beef or potatoes.

Rosario’s Pizzeria, Newbold
There’s a lot going on at Rosario’s: The menu spans regular pizzeria fare like cheese pizza and hoagies, to their own Mexi-Philadelphian inventions: Mexican cheesesteaks, poblana pizza, and much, much more. But tucked away on a corner of the menu are two types of empanadas: chicken and veggie. Both come fried and crispy, with a tomatillo salsa and a hefty serving of avocado. It would be easy to get distracted, but don’t lose focus: These empanadas are delicious.

El Bochinche Restaurante, Northeast Philadelphia
El Bochinche is all about celebrating, drinking too much, watching soccer, and eating lots and lots of their corn empanadas.

Empanada Mama, Doylestown
Empanada Mama does pan-Latin empanadas with a “gringo twist” — which is to say they put whatever they want inside their wheat dough-based empanadas. Authentic they are not, but they are delicious.

El Secreto Snacks Philly, pop-ups
All you really need to know about El Secreto is that they’re doing pop-tart, nacho, and Big Mac empanadas — mash-ups we didn’t know we needed, but we’re so happy to have around.