Why Is it So Hard for Philly Restaurants to Offer Health Insurance?

Thin margins and high staff turnover leave restaurant owners in a bind. Some businesses are finding their own workarounds. 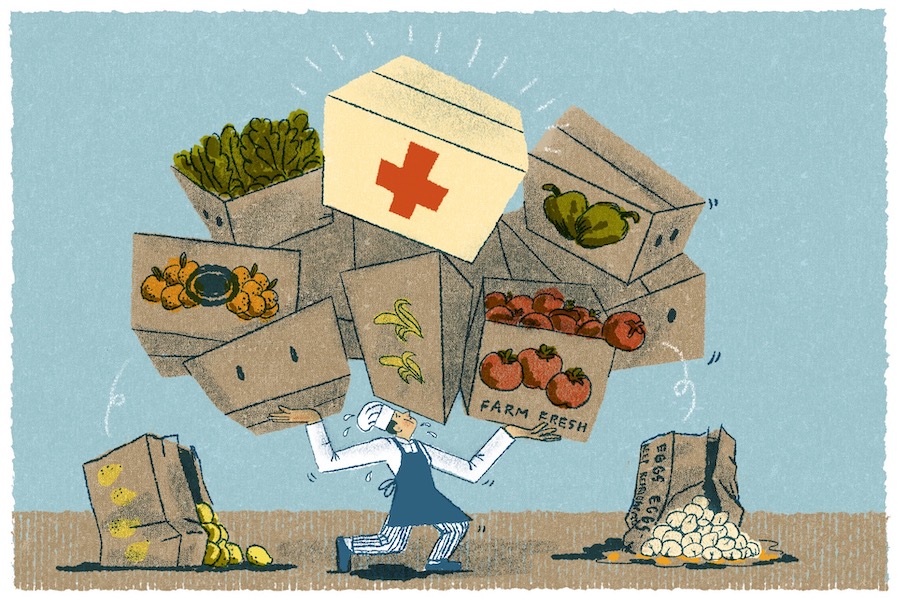 When Sarah Myers was diagnosed with ovarian cancer in March of 2021 after working in the restaurant industry for more than a decade, they wondered if the illness would force them to change careers.

“There was a part where I was like ‘Okay, maybe it’s time for me to go into the nonprofit sector,’” Myers says. “I was working in restaurants and then also worked at a nonprofit to try to build up my résumé. But I also realized: I don’t want to do anything else. I love working in the restaurant industry. That’s why I do it. I just needed to figure out what my workaround was.”

In October of that same year, Myers accepted a job serving at Middle Child Clubhouse in Fishtown. At first, their health care was covered through Medicaid, which they’d been using since before their diagnosis. But when the opportunity arose to take a position as the restaurant’s service manager — a job that would come with more money and responsibility — Myers was concerned the income bump would change their Medicaid eligibility, potentially increasing their health-care expenses significantly and even negating the increase in salary.

Myers is one of fewer than 50 employees at Middle Child. According to the Affordable Care Act, Middle Child’s owner, Matt Cahn, isn’t mandated to offer health insurance for a business that size. Even so, Cahn says, he spent an enormous amount of time researching insurance plans. The labyrinthine systems of the health-care world have become a bit of an obsession for Cahn, who’s somewhat inclined toward obsession to begin with.

“If I’m going to put that level of attention to detail into making a Shopsin club and figuring out how to brine and roast a turkey breast, why would I not do the same with something that actually affects people’s lives?” Cahn says. “At the end of the day, sandwiches are fucking sandwiches, and that doesn’t matter at all. But people’s livelihoods — that really does matter.”

It’s no industry secret that health insurance has historically been unavailable to most workers at small, independently owned restaurants. According to a 2019 Restaurant Success Report published by the popular restaurant technology platform Toast, 31 percent of restaurants surveyed offered medical insurance. (Cahn says that none of his past restaurant jobs included health insurance.) In these settings, small margins and high staff turnover make offering benefits expensive and complicated.

This dearth of insurance options for restaurant workers, Myers says, has created a kind of secondary network of health-care options. “People on staff, especially the people that have been doing it for a really long time, have their workarounds for when they didn’t have health insurance,” Myers says. “They’ll be like, ‘Oh, I know this clinic that does, like, free teeth cleanings every other Monday.’ We have all these little tidbits of information because of how inaccessible our health care has been to us for so many years.”

Workarounds aside, the general inaccessibility of health-care coverage for restaurant workers contributes to staff turnover — which is one of the factors that make offering benefits so difficult for owners in the first place.

“I see the lack of benefits as a barrier for us to grow our industry and to help solve the staffing problem,” says Maria Campbell, the founder of Cooks Who Care, a program of the Community Foundation. Campbell founded the organization in 2017 in response to what she sees as a mental-health crisis in the industry. Much of her work at Cooks Who Care focuses on developing more robust health-insurance options for restaurants, to make the industry more appealing to workers of all backgrounds.

One of Campbell’s goals is to create a fund that offers micro-grants to help offset all kinds of health-care costs for workers in the industry. These payments, which Campbell says could be as much as $300, would help pay for things like a prescription that’s not covered, whether a person has health insurance or not. Campbell’s hope is that people could apply for money for everything from a one-off doctor visit to ongoing appointments with a therapist, or even for emergency care.

Micro-grants would be especially helpful in confronting the needs of undocumented workers, who make up a large but difficult to measure percentage of employees across the country and aren’t eligible for insurance no matter their income or position. Until that policy changes, Campbell’s outside-the-box relief (and other alternatives like it) will remain essential.

As Cahn prepared to open Middle Child, he found his own out-of-the-box approach for his employees. “Technically, we do not offer health insurance,” he explains. “I know this doesn’t sound good off the bat, but I am not interested in, like, feigning being like, ‘Oh, we offer benefits, we offer benefits,’ but it’s actually not good coverage and is super expensive for everyone involved.”

It was important to him to create as much stability for the team as possible. What Middle Child does offer is support in accessing insurance. Every employee can use a private website that was built by a company called Domenick Financial, an independent insurance broker run by Matthew Domenick. The web page details Middle Child’s offerings as well as contact information for Domenick and his team, who act as benefits consultants and liaisons to the state exchange. If an employee isn’t eligible for a minimum subsidy of 25 percent (because of their income) through the exchange, Middle Child provides a taxable stipend to cover the difference.

During the planning phases of his health-insurance search, Cahn surveyed the staff and found that most people either weren’t interested in receiving health insurance or said they’d opt for lower-cost, higher-deductible plans. Moving forward with this option meant that someone who needed to go to the hospital for a broken arm or stitches could still be on the hook for many thousands of dollars.

To protect his staff against potentially high medical bills for these kinds of emergencies, Cahn pays about $17 a month per employee to enroll every team member in an emergency plan through a third-party insurance provider, which offers essentially catastrophic care — think emergency-room visits, ICU admissions, certain types of surgery and stitches.

Cahn looked at offering a group health-care plan — the most common option for large companies — that gives employees up to three options to choose from, all typically from the same insurance company (think UnitedHealthcare or Independence Blue Cross). He also inquired about health-insurance start-ups — services meant to offer primary care at a lower cost, without covering emergencies or chronic illness. But these kinds of health-care startups don’t offer coverage for ongoing medical issues, like Myers’s ovarian cancer. And they typically require a minimum number of sign-ups by employees, which can be prohibitive for small businesses.

Jill Weber, co-founder of Sojourn Philly, a local hospitality group with four restaurants and about 100 employees, says one of its challenges has been getting enough people to sign up for offerings, especially younger people, who would bring the group premium cost down.

Weber tells me low enrollment rates are partially due to large numbers of young people working in the restaurant industry. These workers may be younger than 26 and still on their parents’ health insurance — or may simply not worry about their health and therefore not be interested in insurance.

Myers once felt that way. “I straight up did not care about health insurance until it was a necessity in my life,” they say. “I think that’s how people in the restaurant industry navigate health insurance, because of how inaccessible it has been for the vast majority of our careers.”

Staff indifference continues to be an issue for business owners like Weber who are required to offer health insurance whether people want to use the benefits or not.

“It is so, so expensive,” Weber says of her restaurants’ insurance package. “I think we only have, like, 35 people who have accepted health insurance from us, which is a shame, because that’s part of the compensation package. And as the expectations around wages have gone up, it’s been difficult, because so many people don’t think of health insurance as part of that.” Weber says the company pays more than 80 percent of the premium.

To offset the cost of insurance, Sojourn Philly has raised food and drink prices at the restaurants. There have been other cost-saving measures as well. None of her restaurants have fresh flowers anymore, for example. But she doesn’t feel the problem has been resolved.

Domenick, the independent insurance broker who works with Middle Child as well as other restaurants across the city, says the low levels of enrollment are due in part to staff turnover. Employees miss the period to enroll because there’s no one to walk them through it, whereas in an office job, an HR staff member would likely meet with new hires one on one. Restaurants rarely have a similar structure. This support is one of the main ways that Domenick Financial has made itself essential to restaurants across the city.

“We only have about a 25 to 30 percent sign-up rate,” Cahn says of Middle Child. “So I’m not sure that paying for health insurance is the best use for that money. I could maybe just put all that money in a bank account and then whenever anyone needed to go to the doctor, I could just pay for it. Or I could give everyone across the board a two-dollar-an-hour raise, or I could give everyone a $1,000 end-of-year bonus.”

But for Myers, after their diagnosis, Middle Child’s commitment to health insurance helped them feel like the restaurant industry was still a meaningful career option. When they decided to apply for the service-manager position, Myers worked closely with Domenick to understand how much it would cost to buy an insurance plan on the exchange that would cover their medical needs and allow them to remain with the same team of doctors. Myers was then able to take that number into salary negotiations as they interviewed for the promotion. This, Myers says, shifted their perspective about their work.

“If I hadn’t been able to figure out how to get covered and make that a part of my salary negotiations, I would have just stayed a server,” Myers said. “The agreement we’ve worked out around my insurance means that I’m committed to the job for the first time ever.”