Use this guide to find a great brunch spot before you lie down on your couch for five-ish hours. 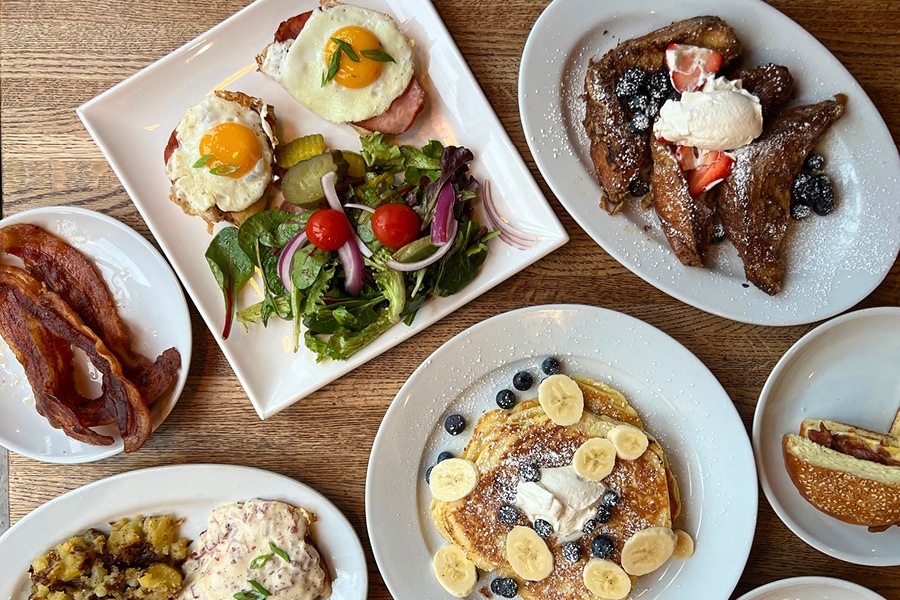 The Broad Street Run is back on May 1st, 2022, and much of the details of the famous Philly race remain the same as ever. Things still start at Broad and Fisher and end on Pattison Avenue, for instance, and it’s still an opportunity for sweaty Philadelphians to identify themselves as being in better shape than their plebeian friends.

There’s one big change to the 2022 race, though. This year, spectators aren’t allowed to hang out along the route or at the finish line, as a way to limit crowds. So if you’re in the business of planning a post-race celebration (whether that’s celebrating a PR or just hobbling across the finish line) use this guide to find a great brunch spot before you lie down on your couch for five-ish hours. These brunch spots span across a couple neighborhoods in South Philly so you’ll have plenty of flexibility to meet your fans for breakfast, even though they aren’t allowed at the finish line.

Nam Phoung, 1100 Washington Avenue
If you’re looking for a restaurant where you can thank the group of people who woke up early on a Sunday to cheer for you via livestream (they deserve the medals, actually), tell everyone to meet you at Nam Phoung. There are about fifty different ordering routes to take at this classic Vietnamese spot in the Wing Phat shopping center off of Washington Avenue. Look around at other tables, though, and you’ll probably see the claypot fish, clams in black bean sauce, crispy bánh xèo, and vermicelli wrap platters. They’re popular for a reason, and the reasons will make you exceedingly happy. One thing to keep in mind: Nam Phoung only take reservations for parties of 10 people or more.

Sam’s Morning Glory Diner, 735 S 10th Street
Your life isn’t a sitcom, unfortunately. But if it were a sitcom, there would be an episode featuring you and three of your friends at Sam’s Morning Glory Diner, talking about some mundane atrocity that happened during the race. (You saw an ex running, a person from work tripped in front of you on mile four, all the kids of the participants staged a coup while their parents were sweaty and tired, etc). That’s exactly the sort of tiled-floor, bar-stool place Morning Glory Diner is. Get a huge plate of pancakes, eggs, and bacon, and plan on lying down for at least 30 minutes afterwards. Morning Glory Diner doesn’t take reservations.

Fiore Fine Foods, 757 S Front Street
Almost nothing about Fiore Fine Foods makes us angry. They bake great ricotta cookies and morning buns, they stack house-made fennel sausage and fontina cheese in breakfast sandwiches, and they offer pre-ordering for brunch pick-up on Saturdays and Sundays. Alright there’s one thing that remains infuriating: Fiore serves hashbrowns with herb sour cream, and we wish we thought of that idea years ago. Schedule your breakfast pick-up between 10 a.m and 1 p.m. on their website ahead of time, or stop by for walk-up orders.

Hawthornes, 738 S 11th Street
Hawthornes is a little like the Cheesecake Factory (but better) in that you can bring anyone here and they’ll find something they’re excited about. After the Broad Street Run, that scenario might involve someone who just ran 10 miles and wants to eat a kielbasa sausage platter or a seven-year-old who ran zero miles and wants to eat a waffle sundae. Hawthornes offers reservations if you’d rather not risk a wait. Plus, you can always sit on their sunny sidewalk patio.

La Llorona Cantina, 1551 West Passyunk Avenue
Whether you’re running or not, it’s possible that your post-race mood will require sitting on a sidewalk with a plate of shrimp ceviche and some tequila. La Llorona, a Mexican spot known for appeasing such a mood, should be your go-to. They serve plenty of egg and egg-adjacent stuff, as well as micheladas and cold, zippy seafood (the whole menu is available during brunch, FYI). Make a reservation ahead of time or show up on the earlier side.

The Tasty, 1401 South 12th Street
This classic vegan diner only offers call-ahead takeout orders right now, but that might be perfect if you’d rather sit on your couch after running 10 miles than contemplate how sweaty you are in a public place. Pay attention to their specials, like biscuit sandwiches or raspberry almond French toast. The Tasty doesn’t currently accept walk-up orders, so start dreaming of your order around mile seven.

Cafe Seulanga, 1838 S 18th Street
You may have heard about (and eaten at) Hardena before, the beloved Indonesian restaurant that serves gado gado and beef rendang we’d like present during all of our major life events. But it’s also possible Hardena will be slammed on Sunday after the race. If that’s the case – or if you want to branch out – check out Seulanga on South 18th Street. This all-day spot has everything from Sumatran regional specials (like some good curried goat and nasi padang party platters), as well as nasi kuning made with turmeric and coconut milk. It’s pretty tiny inside and they only accept cash, so plan accordingly.

Pho Ha, 600 Washington Avenue
Presumably, you live in Philadelphia. So you already know how unpredictable the weather might be on May 1st. We’re not saying this to jinx it, but just in case the skies are gray and the temperature is … unsympathetic to humans running 10 miles, keep Pho Ha on Washington Avenue in mind for a filling, soup-heavy breakfast. Try the bún bò huế for something spicy and some Vietnamese iced coffee to cool things down. Two more things to know: Pho Ha opens at 9:30 a.m. on Sunday and they now accept credit cards.

The Dutch, 1537 S 11th Street
The Dutch is likely to be crowded on race day, because, well, it’s crowded even on days that don’t involve oodles of sweaty people descending upon Broad Street. If you’ve never been here (or you haven’t been since they moved to Fond’s former spot), the ethos of the place is Pennsylvania Dutch But Make It Fashion. That means sweet and savory Dutch Baby options and Strammer Max are up for grabs. Reservations, on the other hand, are not.

Essen Bakery, 1437 E Passyunk Avenue
If you’re looking to pick up a spread of bagels and pastries after the race, Essen Bakery takes walk-up orders as well as online pre-orders. They’re known for their chocolate rugelach, which is convenient since you might be known for eating copious amounts of chocolate rugelach. Keep an eye out for special pop-tarts and focaccia sandwiches, too.

Cafe y Chocolate, 1532 Snyder Avenue
Before Maricela Tellez and Arturo Lorenzo opened La Llorona Cantina, there was Cafe y Chocolate. This famous Mexican brunch spot on Snyder Avenue works well for a casual brunch. Make the chilaquiles or tamal azteca the protagonists of your meal, and treat the drinks – hot chocolate espresso drinks or milk-based smoothies – like essential supporting actors. If you’re worried about getting a table, call ahead and ask what the seating situation is looking like.