This Year, It’s a Feast of the Seven Pickles in Fishtown

Plus, Starr Restaurants and Aramark join forces, Kismet Bagels makes it official in Fishtown, and an atrocious cheesesteak recipe. 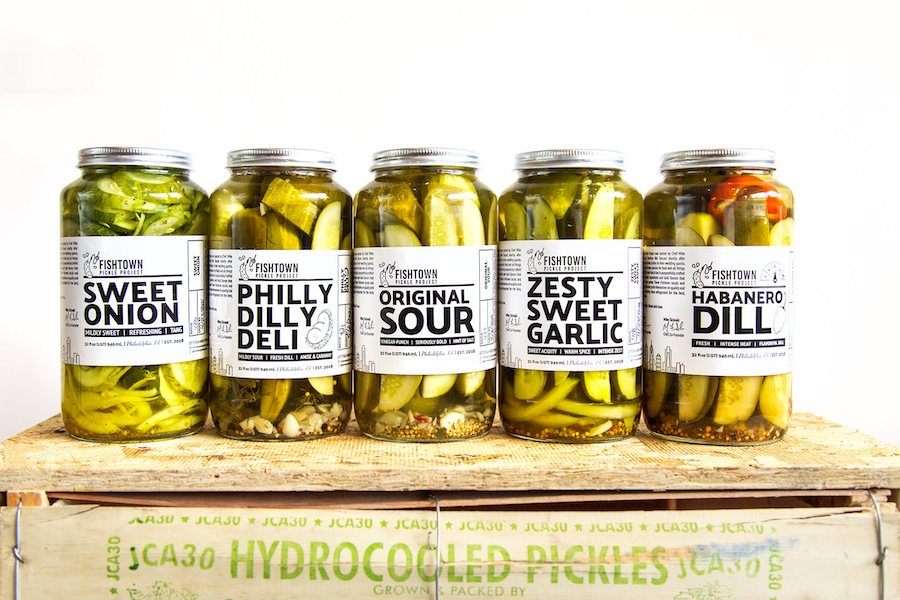 Happy Monday everyone. We’ve got lots of news to cover this week, including new pizza, a permanent home for one of the city’s great bagelries, birthday parties, breakfast sandwiches, the return of disco, a cheesesteak travesty and one of the biggest local collaborations ever

But let’s start things off with …

The Feast of the Seven Pickles

Every holiday season, Philly has a million Feasts of the Seven Fishes. There are events, special menus in restaurants, a whole swing in the industry focused on putting fish (and lots of wine) into fancily-dressed Philadelphians. And every year, it seems like someone comes up with a novel spin on this very traditional event.

This year, the crown goes to the crew at the Fishtown Pickle Project and their Feast of the Seven Pickles happening at Fishtown Social. Started by chef Mike Sicinski and dietician Niki Toscani after handing out handcrafted pickles to their wedding guests in 2018, the FPP makes small-batch, artisan pickles using all-natural ingredients, and sells them online and in stores around the region. But for this event, they’re bringing together a bunch of local products and talent for a big, pickle-focused holiday event on Frankford Avenue, and then donating a portion of the proceeds to Magee Rehabilitation.

This might be the most Fishtown thing I’ve ever heard.

Dishes for the night include a half sour pickle with gouda from Third Wheel Cheese Co., hummus with black garlic-pickled turnip, Kismet Bagel chips with fruit jam and tangy cheese, local deviled eggs spiked with pickle juice and seerved with chef Eli Kulp’s homegrown peppers, and soba noodles with pickled fennel and carrot. There’s also going to be kielbasa from Czerw’s topped with fermented Brussels kraut and Dijon mustard and a pickle dessert: a bite of flourless chocolate cake from Sweet T’s Bakeshop in Haddonfield served with pickled blueberry and orange rind.

Fishtown Social owner Vanessa Wong is bringing in wines from Mural City Cellars, and everyone through the door will get a mini-flight of a red, a white and a rose. They’ll also be selling glasses of a very limited Vermut from the Mural City CSW that hasn’t been released to the public yet.

The event is happening at Fishtown Social on Tuesday, December 21st. There’ll be a 5 p.m. seating, a second at 6:30 p.m., and a third added if things start getting crowded. Tickets are $35 and include a plate of seven pickle-centric dishes, the flight of Mural City wines, and all the pickle jokes you can make. You can get your reservations right here. Walk-ins are also welcome.

Starr on the Rise

Here’s some big news: It looks like facilities management giant Aramark has entered into a “strategic collaboration” with Stephen Starr and the Starr Restaurant Organization which will allow Aramark to “operate designated Starr concepts and brands within multiple lines of its business.”

Because Aramark? They’re based in Philly, but they’re everywhere. Convention centers, sports arenas, hospitals, stadiums, schools, prisons, colleges and more. They’re at the National Constitution Center and in 500 school districts across the country, at Pike’s Peak and the Linc. And wherever Aramark is, now Starr could be, too.

“I began my career as a concert promoter in stadiums and major arenas and am eager to get back into large entertainment venues,” Starr said in a statement, “but this time in the culinary space.”

Starr’s got a big organization — more than two dozen restaurants across four states (plus the one in Paris), but is largely focused in Philly. Aramark? In one capacity or another, they claim to serve 100 million people a year. And while Starr says he’s going to continue overseeing all of his restaurants, the licensing agreement with Aramark means that they could put an Alma de Cuba in every Aramark-contracted college dining hall or zoo.

Really, anything is possible. Because while this is not a unique partnership (there’s plenty of similar examples of mostly-local restaurant groups partnering with big, national service providers), it is a very big, very Philly-focused deal. And I’m really curious to see how this plays out.

Kismet Gets an Address

Last time I talked about Kismet bagels was just a couple weeks ago. I was telling y’all about a whole series of holiday-focused pop-ups they had in the works, running all the way up to Christmas Eve.

Now, though, owners Jacob and Alexandra Cohen and Kismet team have some different news. It looks like they’re going to be opening their first brick-and-mortar location this winter (but after the New Year) at 113 East Girard Avenue in Fishtown.

And look at this! I’ve even got some details.

The space is a 540 square foot storefront from which Kismet will be doing takeout and a little bit of dine-in service from a handful of seats inside. It’ll be open Wednesdays through Sundays, from 7am until sell-out. There’ll be a fresh bread program run by baker Sam McNamara, pastries from Erica Pais, coffee from Moonraker, salads, bagel sandwiches, loose bialys (also the name of my new punk band), and breakfast sandwiches on the board.

Kismet will continue doing pop-ups and selling their bagels wholesale, and there’ll still be a charitable component to the business—with proceeds from sales and events being donated to causes of the Cohen’s choice. No word yet on a precise opening date, but it’s being pitched as “winter, 2022” so that means soon.

As always, you’ll know more when I know more.

Wood-fired, “snout-to-root” restaurant Ember & Ash is celebrating its first birthday this month with a few announcements.

On Monday, December 27th — traditionally a complete waste of a day — they’re running a special happy hour party from noon ‘til 5 p.m. Warm cocktails, passed snacks, a full bar. It sounds nice, right? They’re also bringing back one of their most popular opening dishes: corn donuts with smoked beef fat, yuzu curd and uni. And who doesn’t love a little curd on the Monday after Christmas?

After that, there’ll be a one-day-only release of the restaurant’s breakfast sandwiches on New Year’s Day from 10am to 2pm. In the past, these things would sell out regularly. But on New Year’s Day, E&A is doing them as grab-and-go pick-me-ups for the neighbors.

For those of you in need of a little hair of the dog, the bar will be up and running that day, too.

And hey, guess what? The Trestle Inn is open again. They’re running till 2 a.m. on Thursdays, Fridays and Saturdays, slinging whiskey sours and spinning funk, soul and disco for their weekend dance parties.

Harper’s Garden has a new chef in the kitchen. Chaz Brown (ex of Le Bec Fin and the Fatty Crab in NYC) has taken over the line and launched a new, seasonal, farm-to-table menu. He’s doing brined pork chops with tatsoi and apple-apricot chutney, a winter greens salad with beets, cranberry-pepita yogurt and apple chips, and there’s a whole new bar program to match.

Harper’s is also bringing back their greenhouse dining options from last year with two different sized, heated and decorated greenhouses available — one small, one large. You can check out the details here.

Marcie Turney and Val Safran are teasing their new pizza spot, Good Luck Pizza Co. with a series of take-out only pop-ups operating out of the former Jamonera space at 105 South 13th Street. The first one was last week, but there are more coming, so keep an eye on Good Luck’s Instagram for more dates.

The for-real Good Luck opening is scheduled for “early 2022” — which is also when Safran Turney Hospitality are supposed to be opening their other new restaurant, Loveluck, inside the LOVE Park visitor’s center.

And finally this week, I will leave you with what, sadly, was not the wost thing I’ve ever seen done to a cheesesteak, but was absolutely the worst cheesesteak-related crime I’ve seen lately. It was a recipe (of sorts) in the Washington Post for an oven-baked, sheetpan version of the “classic” cheesesteak sandwich. It involved cream cheese, mustard, mushrooms and…well, you should really just check it out for yourself. Even calling this thing an “adaptation” of a cheesesteak seems to be stretching the meaning of that word to uncomfortable lengths. And this tweet from Laura Hayes of the Washington City Paper sums it all up quite nicely with a single captured quote:

Oh dear. "I microwaved cream cheese, Worcestershire sauce and mustard, stirred that together and tossed it with the meat mixture until it was well-coated." https://t.co/NmoEYrRcFw

Friends don’t let friends make recipes like this. They certainly don’t let friends publish them in the newspaper. And while I know there are a lot of bigger, more existential problems in Washington D.C. right now, I say this from the bottom of my heart.