Plus, Irwin's gets some ink in Esquire, and an Italian-Jewish Hanukkah dinner. 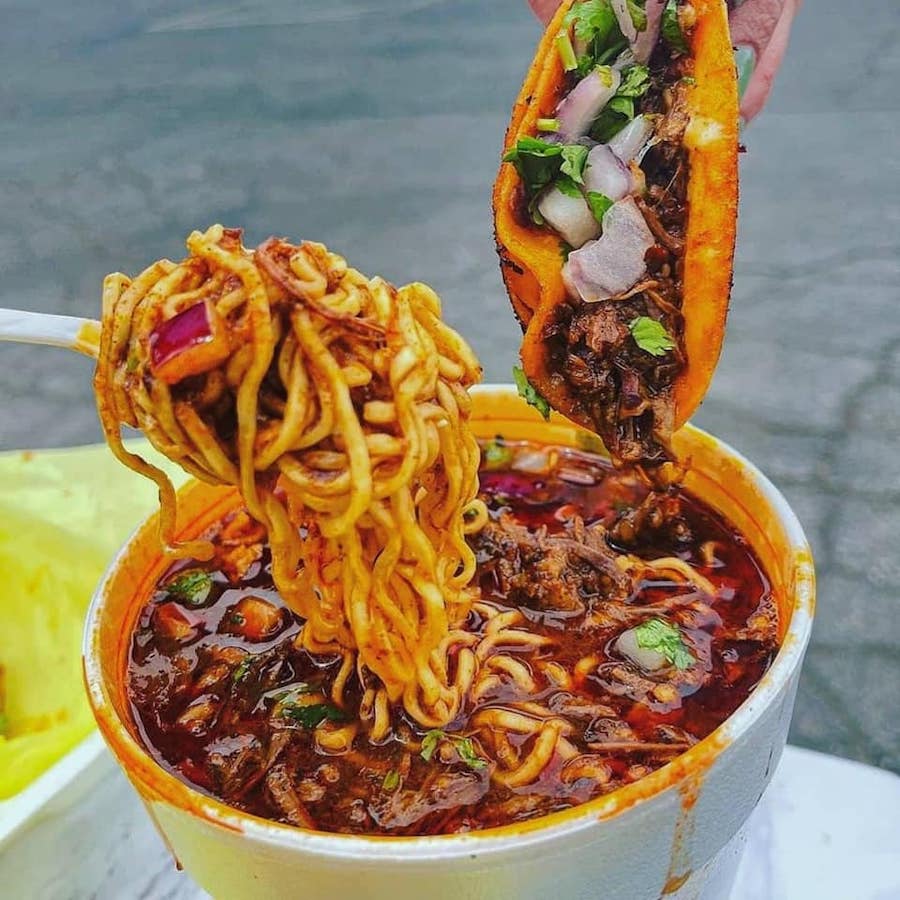 Howdy, buckaroos! And welcome to the Monday news round-up.

It’s Thanksgiving week, so you’d think things around Foobooz HQ would be a little quieter than usual. But like every week lately, the scene has been jumping. Deals are being made. Openings are being announced. There are Chrismukkah bagels, holiday pop-ups happening, one of our own on another big, national list of the best restaurants in the country, and even GZA from Wu-Tang Clan was in Philly last night, hosting another one of Han Dynasty’s legendary 15 course, 15 beer Wu-Tang Dinners.

But let’s kick things off with an update to a story we started watching over the summer. Because Jen Zavala has some news …

The bad news? Because of some technical issues, she had to temporarily close Juana.

But have no fear. Juana Tamale (which plans to operate initially on a 3-days-a-week schedule anyway) will be re-opening this week for the Black Friday and Saturday crowds, serving tamales (natch), vegan wings, churros, vegan and beef birria tacos and, most notably, a queso birria ramen which sounds kinda fantastic — and not something I’ve seen anywhere else. Opening hiccups aside, the place looks very cool (like a punk rock Pee-Wee’s Playhouse, but with tacos). And, as you might guess, it’s already drawing big crowds.

The Inky did a big piece on Zavala and Juana Tamale on Saturday if you’re interested in the details. And you can check out the house Instagram feed right here for any updates.

The crew from Esquire put out their annual list of Best New Restaurants in America last week and guess who got the nod?

No, seriously. Guess. I mean, we have a LOT of really good restaurants right now, so if it was you choosing among the new kids, who would you pick?

Because Esquire picked Irwin’s. The new, post-shutdown Irwin’s with its Sicilian menu and let’s-get-the-band-back-together crew brought over nearly whole from the late, great Res Ipsa. They put it at #11 on their hit list, between Shawarmaji in Oakland and Oyster House in Washington D.C., and here’s what they had to say:

“The romance is unexpected. Graffitied room, perched atop an old art deco high school, a sprawling terrace with science-lab tables and plastic school chairs, lit by string lights and the moon (if you’re lucky), with sweeping views of the low-slung row houses and the Walt Whitman Bridge. And then chef Michael Ferreri’s modern Sicilian fare is rolled out by a gracious staff—a fritto misto with succulent shrimp and fried lemons, handmade al dente twists of trofie pasta, a perfect caponata. Natural wines are poured, Prince comes on, and all of a sudden South Philly feels like the most hip, romantic place around.”

Which is nice, right? Someone definitely got the magic that makes Irwin’s work, and it’s nice that someone found a little romance in South Philly.

So congrats to the entire team at Irwin’s. Glad to see you getting some of that fancy Esquire ink. Even if we loved you before you were cool.

When Is a Pop-Up Not a Pop-Up?

Serious question: How long does a pop-up get to run before it just becomes, you know … a restaurant?

I’m asking because Opa (which was a restaurant) is popping up (as itself) at Drury Beer Garden (which used to be attached to Opa when Opa was an actual restaurant) starting this week and running until at least the end of the year — if not longer.

Now don’t get me wrong. I don’t have any kind of problem with this. I like what George and Vasiliki Tsiouris did with the place when it was trending more fancy and it made sense when, during the pandemic, they leaned into the beer garden side of things, brought it inside into the former Opa space and made everything into one super-sized Drury, which hosted occasional Opa pop-ups.

Now, though, they formalizing things by rolling out a whole second menu of Opa’s greatest hits, some new Greek specialties and Opa-inspired cocktails (all of which will be offered alongside Drury’s existing menu) in a kind of Inception-style pop-up of the original restaurant in its original place. Freaky.

And also, it’s going to be sticking around for a while. Plans are to keep the Opa menus in place until at least until January—and possibly further into winter. So, semantics aside, what we have is the Drury crew Christopher Nolan-ing their former restaurant’s menu into said restaurant’s former space with no particular end-date in mind. I guess what makes it a “pop-up” is that all of this will still be happening under the Drury Beer Garden name. But to me? It just sounds like George and Vasiliki are re-opening Opa. And that’s good news no matter what they want to call it.

Happy Chrismukkah to All

Speaking of pop-ups, how about four more?

For real: Kismet Bagels founders, Jacob and Alexandra Cohen, have four pop-ups on the books between now and Christmas Eve. Well, actually three. Because they did one of them this weekend at Nardone Pasta Co., but I didn’t hear about it until I’d already filed last week’s column so I didn’t have the chance to tell you folks about it. Which is a shame, actually, because it sounded awesome.

But hey, that still leaves three more coming, right? The first is on Sunday, December 5th at Huda in Center City. Kismet will be teaming up with Yehuda Sichel from 8 – 10 a.m. to serve a special blue and white Chanukah poppy seed bagel breakfast sandwich with eggs, potato latke, and Huda Sauce. There’ll also be labne and lox bialy if, like me, you just really hate poppy seeds.

Next, Kismet will be heading to Her Place Supper Club on December 12th for a bialy throw-down. There’ll be a variety of flavors, walk-up only, available from 10 a.m. – 2 p.m. or whenever they sell out.

And on both Thanksgiving Eve (November 24th) and Christmas Eve (December 24th), the Cohens will be popping up at Vincent Finazzo’s Riverwards Produce in Fishtown, offering holiday-flavored bagels and bialy to the masses. I happen to know that the Thanksgiving spread will include themed bialy like sweet potato with marshmallow, apple pie and stuffing. Christmas Eve will be a complete surprise though. Both days they’ll be selling from 9 – 11 a.m., so show up early.

Looks like they’re getting into the holiday spirit over at Cicala, too. The kitchen is turning to the Jewish Quarters of Southern Italy as inspiration for an Italian-Jewish Hanukkah dinner on December 1st at 6:30pm. $125 per person covers everything (including wine pairings) and the menu looks fascinating — a cucina povera look at the historic influence of Jewish food culture on Italian cuisine (and vice versa). We’re talking eggplant falafel with harissa-whipped ricotta, thinly-sliced beef tongue with salsa all’agresto, paccheri with salt cod, chick peas, cumin and sumac, and braised lamb shoulder with Jerusalem artichokes and pomegranate.

“Culinary clues stemming from the influence of Jews from Middle Eastern countries and North Africa can be seen in southern dishes that use spices like harissa, cumin, and mint,” according to Cicala. “Offal is often served, as making use of the entire animal is essential in la cucina povera. The Jews of Italy are surely to thank for many dishes involving baccala, (dried cod fish), and fried items especially the beloved carciofi alla giudia (fried artichokes).”

Sounds like it’s gonna be a good time. Make your reservations here.

Over in University City, Misconduct Tavern has opened its third location at 3131 Walnut Street (inside The Left Bank). The original two are still up and running in Rittenhouse and Logan Square.

The annual pop-up Christmas bar, Tinsel, will be debuting to the public on Thanksgiving weekend at 116 South 12th Street in Midtown Village. As in years past, there’ll be decorations, lights, photo ops, ornaments, Christmas music, glitter and, of course, holiday-themed cocktails.

And as if George and Vasiliki Tsiouris weren’t busy enough with their reincarnation of Opa (see above), they’re also getting into the holiday spirit with their (mostly) annual Christmas pop-up at Craftsman Row Saloon.

After skipping last year due to the pandemic, Craftsman Row is coming back big this year with 5,000 feet of garland, twinkly lights, thousands of ornaments, hundreds of bows, stockings, Santas and elves on various shelves. Seriously, it’s like a Hallmark channel movie exploded in there. It’s truly something.

They’re also doing holiday milkshakes (including one topped with a whole slice of pumpkin pie), a Christmas dinner burger with stuffing, cranberry sauce, sweet potatoes and fries (like a jumped-up Gobbler, only mounted on a burger), and serving drinks inside sparkly ornaments.

The Craftsman Row pop-up will run through the Christmas season and finish up in January.