The Foobooz Guide to Not Cooking a Single Thing This Thanksgiving

Let Philadelphia’s chefs, bakers, and French-pastry makers do all the cooking this year. 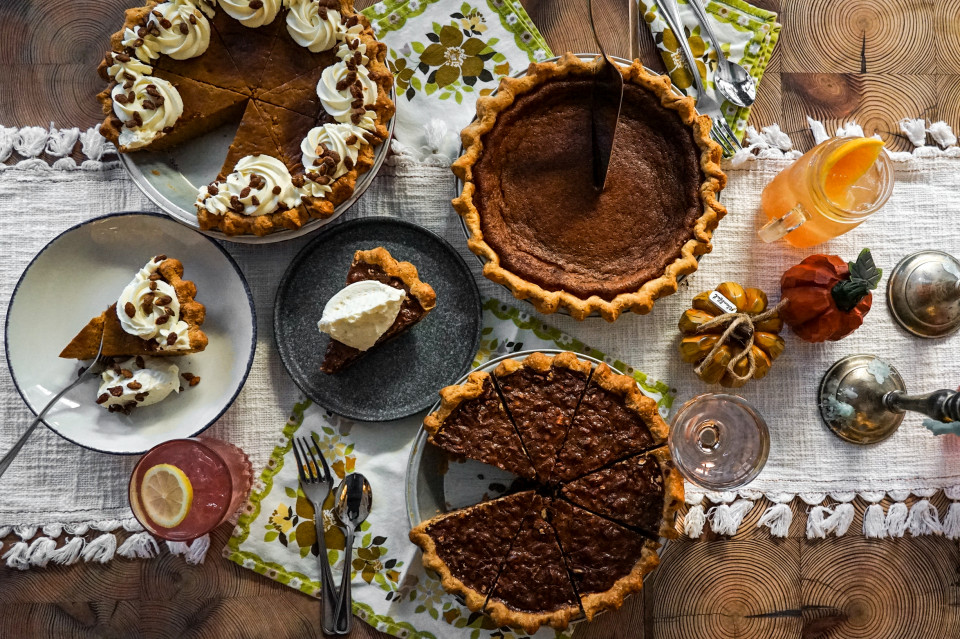 If you’re not sure whether or not to order your Thanksgiving dinner from a restaurant, consider all the cooking you’ve already done this year. One very nice way to spend the holidays this year, whatever they may look like, would be spare yourself that duty, while also supporting some of Philly’s local restaurants which are probably going to be absolutely decimated this winter. Oh, there’s also the fact that these people are actual professionals, so the food will definitely be much better than whatever you thought you were going to whip up. Here are your options.

Lost Bread Co.
You know what would be cool this year? Honoring the real history of Thanksgiving and the history of Indigenous people in this country. To that end, order one of Lost Bread Co.’s Three Sisters Pies, with a toasted hominy crust, Azuki bean miso ganache filling with spiced roasted squash and topped with mascarpone cream, lightly sweetened and whipped up with pepita crumble. All proceeds will go to We Are The Seeds, an Indigenous arts organization.

Fiore Fine Foods
You should order Fiore’s Thanksgiving meal because they’re a team of extremely talented cooks who will definitely satisfy your every craving (homemade biscuits! rosemary and sage rubbed turkey! Chef Ed’s famous green bean casserole!). But if that’s not enough to convince you, the video they made surely will. They’ve also priced their menu at $49 per person, so it’s customizable to your party size. Order by November 19th.

Ange Branca of Saté Kampar
If ever there was a year to throw Thanksgiving food traditions out the window in favor of something more exciting and delicious, this would be that year. For $120, you can find yourself the proud owner and eater of one of Ange Branca’s Eight Treasure Ducks, fully de-boned, stuffed with Cantonese cured seafood, nuts, herbs and rice, then roasted until it’s golden brown and crisp-skinned. Turkey who? 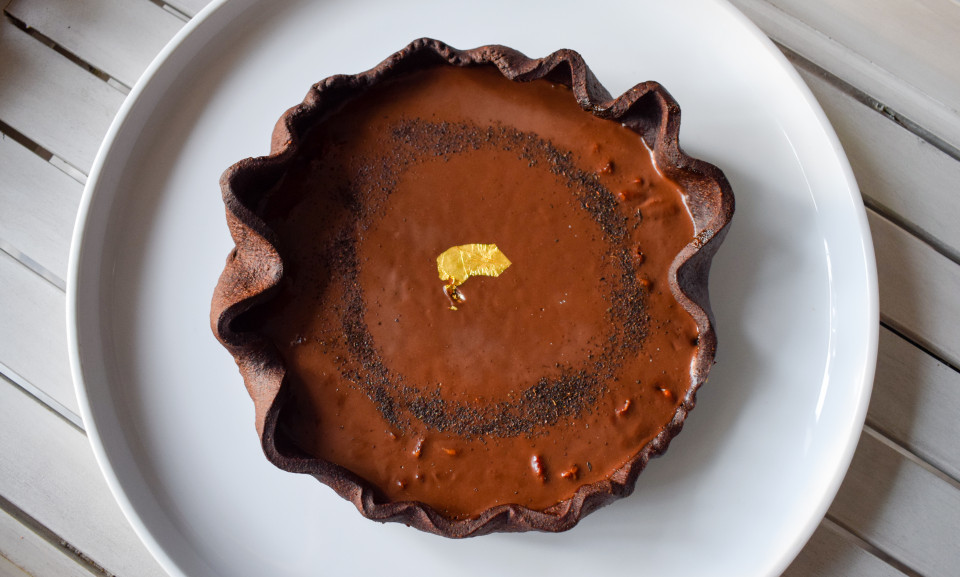 Porcos and Small Oven Bake Shop
You know what would be extremely baller? If you told your crew you were going to make Thanksgiving, but then instead of a turkey, you set down a five pound hunk of Porcos herb-stuffed crackly porchetta. No more fighting over the dark meat. Owner Chad Durkin is also a trained pastry chef, so it’s worth giving their wide variety of pastries a good long look as well. Order by November 24th.

River Twice
For $300, the team at River Twice will prepare your whole meal for four to six people. The meal skews southern, as an homage to chef-owner Randy Rucker’s background, and includes half of a pre-roasted, sweet tea-brined organic turkey, ginger-golden raisin cranberry sauce, green bean casserole, oyster-cornbread dressing/stuffing, sweet potato mash, plus a pumpkin pie and two packets of King’s Hawaiian rolls for leftovers.

Talula’s Daily
Talula’s Daily is a good option if you’re looking to add on a couple of purchased items to serve alongside homemade dishes. Add side dishes like pumpkin risotto or brioche stuffing to your own turkey day, or go all the way and let Talula’s do all the work. Order by November 16th.

Oyster House
I don’t think I’m alone in the belief that at least half the pleasure of any large holiday meal is an over-the-top spread of appetizers. Opt for Oyster House’s appetizer centerpiece of a two-dozen shrimp cocktail platter for a show stopping spread. They’ve also got a southern-style oyster and cornbread dressing (stuffing!) available, as well as several pies. Order by November 21st.

Di Bruno Bros.
Speaking of appetizers, Di Bruno is always a go-to spot for an excellent cheese and charcuterie spread, but around Thanksgiving they really pull out all the stops with their catering skills and offer an excellent array of options, from turkey and prime roasts, antipasti platters, pies, wine pairings, and more. Order by November 20th. 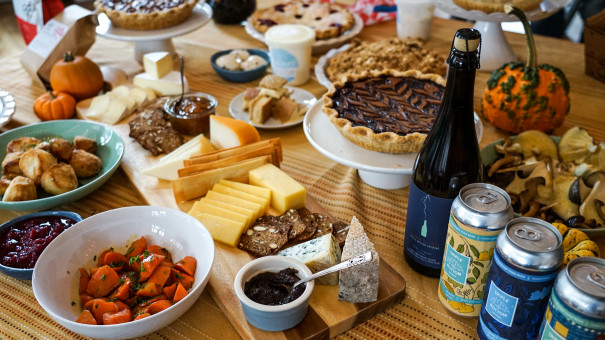 Joy Box
Joy Box started back in March as a way to bring some small joys into our lives during a very dark time. Now, the box (which brings together a handful of Philly’s most joyful food and beverage companies) is offering a customizable box which includes but is not limited to: cheeses and cheese plates from Third Wheel Cheese Company, beers from Triple Bottom Brewing, pies from Lil’ Pop Shop, sides from Stargazy Pie Shop, and so much more. Order by November 20th.

a.kitchen
Skip the cooking altogether and pick up one of Eli Collins’ full-out meals for two or four. He’s even smartly split up the fixings from the turkey, so you can get the sides without the main dish because … let’s face it: Thanksgiving is all about the sides.

High Street Philly
Even in its new location, it’s common knowledge that High Street has some of the best bread in the city. And you know what makes great stuffing? Great bread. The standard package from High Street feeds four people and includes all the sides you need, plus the option to add on a half or whole turkey and a variety of pies.

Walnut Street Cafe
Most of these options require pick-up, but Walnut Street Cafe’s Thanksgiving menu is available for delivery via Doordash if you just cannot bring yourself to brave the outside world.They’ve got a la carte sides to serve four to six people, plus a whole roasted turkey, appetizers and pies. Order by November 21st.

Mighty Bread
Mighty Bread makes some excellent breads and pastries all the time, but they’re particularly relevant during the holidays, which I like to call carb season.

Oui Pastries
Nothing is worse than bad pie on Thanksgiving, so just leave it up to a professional. Oui Pastries is offering a variety of pies for just $26 a pop. Order by November 23rd.

Jet Wine Bar
Contentious family dynamics or not, Thanksgiving is not complete with out … several … bottles of wine. Jet Wine Bar is offering two- and four-packs of Thanksgiving appropriate wines for pickup, all intentionally chosen to pair well with the flavors of the holiday. As usual, Jill Weber’s wine picks are outside the box and totally delicious.

Franklin Fountain
Here’s an unbidden opinion: Ice cream is better than pie. Franklin Fountain probably agrees with me, because they’re offering you the perfect excuse to skip the pie by opting for one of their pumpkin-shaped ice cream cakes made with pumpkin butter ice cream, butterscotch and caramelized white chocolate covered gingerbread pieces, candied ginger, and spiced pecans.

Weavers Way
Cooking vegan Thanksgiving options can be a hassle, but Weavers Way has you covered on the plant-based front, in addition to the non-vegan options. Order by November 20th.

Fitz & Starts
In addition to a full-out meal and several pies (purple sweet potato souffle! Maple pecan! Heirloom pumpkin!), Fitz and Starts is offering a variety of autumnal pastries that will spare you the hassle of cooking breakfast on the big day.

Vanilya
Vanilya has pies, they have galettes. They’ve got tiramisu, chocolate mousse, and several types of bread. But you know what they have that is most important? Ice cream.

Essen Bakery
I’m not exactly sure how a pumpkin cheesecake babka fits into my Thanksgiving day. Will I eat it for breakfast? As dessert? The morning after? Probably all three.

Ripplewood
You don’t have to drive all the way into the city to get a great Thanksgiving setup made for you. A Thanksgiving meal for four eight includes turkey, your choice of four sides, a chocolate bourbon pecan pie and even a two 24-ounce containers of premade cocktails. Order by November 20th.