Where to Get Fantastic Schwarma in Philadelphia

Served as a platter or rolled into a pita, this Middle Eastern spit-roasted delicacy is one of our favorites. 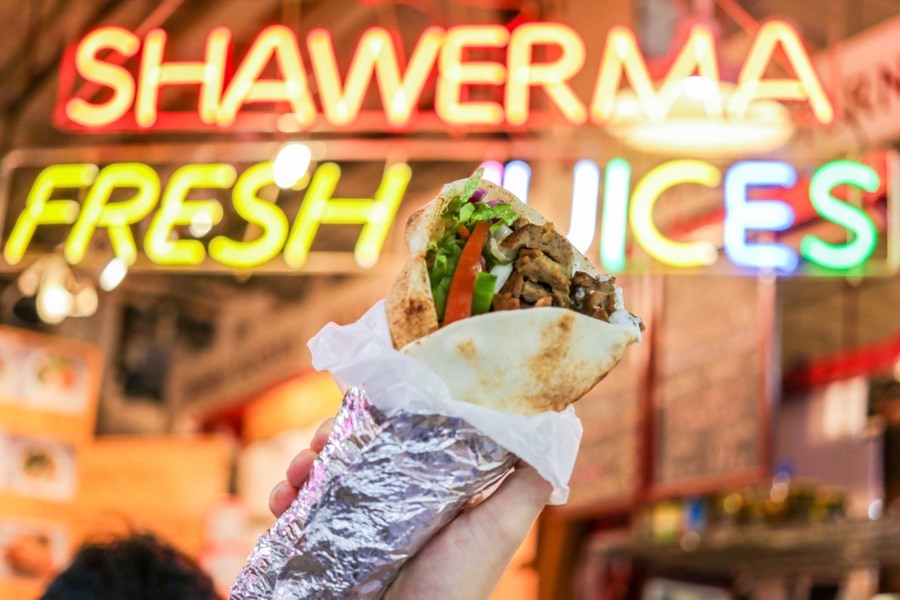 There are few foods as satisfying and convenient as schwarma. Pieces of marinated lamb or chicken (and sometimes beef) are stacked on a vertical spit, gyro style, then grilled until juicy and sliced from the spit to order. You can get them bundled tightly in a pita with veggies, pickles, and a garlicky yogurt sauce for maximum portability, or served with a full meal of rice, hummus, and salad if you’ve got time to linger. Here are some of our favorite places for schwarma in Philadelphia.

The chicken maroosh sandwich from Saad’s is on another level of deliciousness! The grilled chicken, sautéed onions, parsley, tomatoes, pickles and the garlic sauce on a toasted hoagie roll makes for a poppin’ sandwich! If you didn’t know, now you know 😎 #chickenmaroosh #saadshalalrestaurant #westphilly

Saad’s Halal Place, Spruce Hill
Any schwarma you order at this staple of West Philly’s Middle Eastern food scene will be great. But the key here is to ask for your schwarma “maroosh way”: your spit-roasted meat, pickles, veggies, and garlicky yogurt sauce is sandwiched within a toasted and pressed footlong hoagie roll, somehow improving on perfection.

Judah Mediterranean Grill, Northeast Philly
Seeking a kosher source for your schwarma? Look no further than this Bustleton spot, which offers glatt kosher meats wrapped in pita or on hefty platters.

Amasi, North Philadelphia
We’re willing to bet that this Temple campus spot is the only place in the city where you can order up your schwarma with a side of fried mozzarella sticks and a hookah chaser.

Sahara Grill, Midtown Village
The heart of downtown Philly is low on brick-and-mortar schwarma sources with a few notable exceptions — like this quiet yet excellent Walnut Street spot just east of Broad, which is a great spot for when halal cart atmosphere just won’t cut it.

Hummus, University City
This Best of Philly-winning spot on the Penn campus layers in lamb fat between the chicken thighs on their vertical roasting spit. And if that weren’t enough to get you there, you have your choice of a half-dozen veggie salads along with hummus and tabbouli to go alongside your schwarma when you order a platter.

Al Amana Grocery, Kensington
Several of the best Middle Eastern restaurants in Philly sprung up around the city’s mosques, like West Philly’s Masjid Al-Jaima, just blocks from several of the spots on this list. But as far as we can tell, Al Amana is the only housed within and run by a mosque, Al Aqsa Islamic Society. Hit them up on Fridays for schwarma roasted on the traditional vertical spit; it’s available from the regular grill on other days.

Stina, Newbold
Bobby Saritsoglou does chef-driven Mediterranean right with a menu that combines familiar crowd-pleasers (pizza, handmade pasta, hummus) with other highlights from the large and diverse region like Turkish pide and schwarma, served on tender pita from the restaurant’s huge, wood-fired oven.

Makkah Market, Spruce Hill
When the bars close, it’s not easy to find satisfying and filling food options beyond mediocre pizza or fast food. But at grocer-slash-restaurant just west of the Penn campus, you can get the schwarma sandwich you’re craving any time of the day or night — just order from the window after-hours.

Pita Pocket, Cheltenham
Chase your schwarma at this Northeast Philly spot with a Turkish coffee and a slab of crispy, sweet kataifi, made with sugar and shredded phyllo dough. 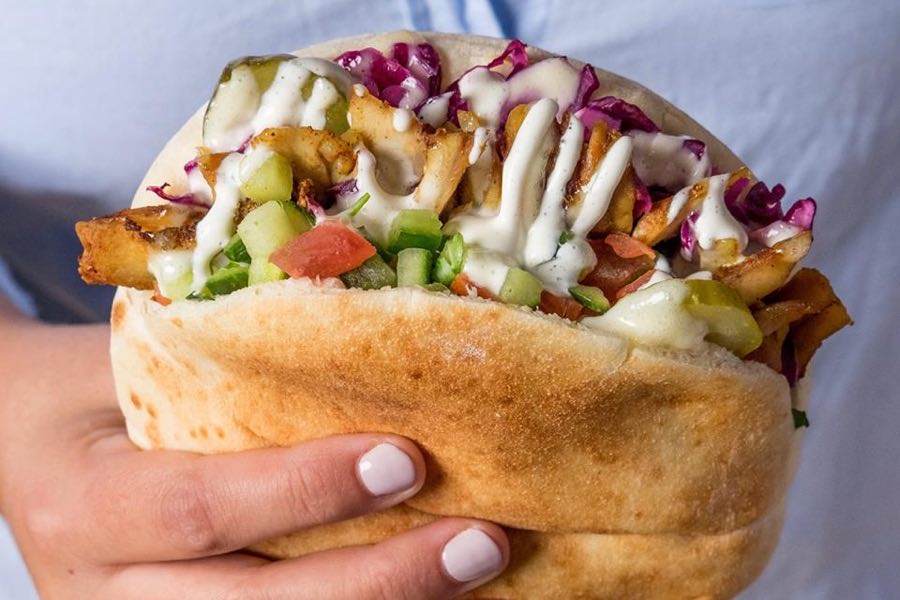 Naf Naf Grill, Center City, Malvern, Bala Cynwyd, King of Prussia
This chain specializes in Mideast favorites served fast-casual style, with a build-your-own approach to classic dishes. Here, you can get your chicken schwarma served over hummus, rice, salad, or couscous and top with accessories like veggies, pickles, and sauces — or get it served pocket-style in a toasty warm pita.

Manakeesh, Spruce Hill
The menu at this West Philly spot ranges from fresh juices to omelets to its namesake Lebanese flatbreads — and that includes schwarma made with both traditional chicken as well as beef. Be sure to stop by their bakery counter for dessert.

Jerusalem Foods, Kensington
Some of the best schwarma on this list are served from a food counter inside a neighborhood Mideast grocer — and that includes this Girard Avenue spot. Hit them up for lamb or chicken schwarma while you’re stocking up on olive oil and pantry spices.

Smiley’s Café, Manayunk
This newly-remodeled Main Street staple is known for big portions. Order up a platter or pita sandwich made with beef or chicken schwarma with a smoothie to go along with it.

Alyan’s Restaurant, Queen Village
A South Street staple, this casual sit-down spot has been turning out schwarma — in classic chicken or a mix of lamb and turkey — since 1982.

Mashwa Grill, Queen Village
After opening his own poke restaurant, chef Mahmoud Chaabane turned to the Tunisian cuisine he grew up with for this South Street spot, which excels at grilled meats.

Old Thyme Cafe, Old City
This Market Street stalwart does great schwarma, but it’s the accessories that catch our eye here: add on a nonalcoholic cocktail like the Port of Al Mina, made with a blend of berries, pineapple, banana, peach, and kiwi, and a slice of basbousa (honey-soaked semolina cake) for dessert.

Pita Chip, North Philly and University City
Owners Omar Alsaadi and Mouhanad Kabbani serve the street food they ate as kids growing up in Syria, including chicken and beef schwarma. Try it with their Buffalo tahini sauce (trust us on this one).

Desert Rose, Media
This suburban BYO stole our hearts with their signature chicken schwarma — served with amba (pickled mango), pickled eggplant, tahini, and spicy harif sauce — and earned themselves a Best of Philly win in the process.