Assuming the government doesn't shoot down the idea, Bally's Beer Yourself self-serve beer bar is scheduled to debut in June. 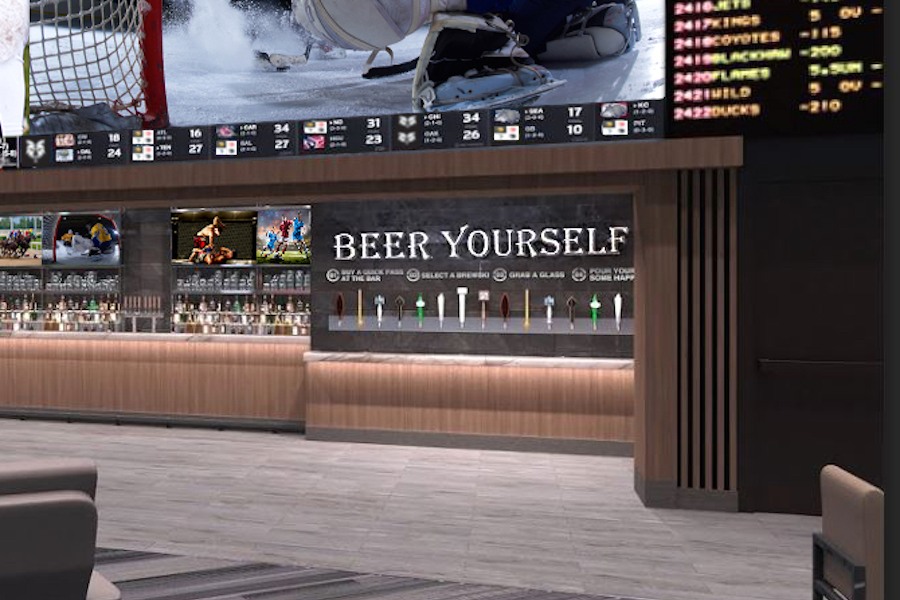 A rendering of the Beer Yourself self-serve beer bar slated for Bally’s in Atlantic City.

You know how frustrating it can be when you are standing at a crowded bar, trying to get the bartender’s attention so you can get a pint of frigging beer, and it seems like nobody is paying attention to you and you just want to start throwing chairs, breaking glasses and otherwise throwing a tantrum, or am I the only one who ever feels this way?

In any event, one Atlantic City casino has the answer: self-serve beer.

Pending approval by New Jersey’s Division of Gaming Enforcement, Bally’s Wild Wild West casino on the Boardwalk in Atlantic City says it will debut the Beer Yourself self-serve beer bar in June. There will be 16 rotating beers on tap, and as far as we know, this would be the first self-serve beer bar in the entire region.

Casino management is still trying to work out exactly how the self-serve beer bar will work, and some of that depends on what the regulators at the DGE come back with. But it’s being modeled after the Beer Yourself self-serve beer bar that debuted last year in Las Vegas at the LINQ hotel and casino, which is owned by Caesars, which, in turn, owns Bally’s.

At the Beer Yourself at the LINQ in Las Vegas, it’s pretty simple. You go to a cashier and provide identification and a payment method, and they give you a card that you use at the self-serve beer bar.

The Beer Yourself machine charges you by the ounce, so you can grab a sample or fill your cup, and it charges accordingly. At the end of your night or whenever it is that your drinking session has ended, you’re charged for whatever you consumed.

Here’s a video that some guy shot of the Beer Yourself in Las Vegas:

Of course, it’s easy to see how a self-serve concept could go wildly wrong when it comes to alcoholic beverages, and let’s face it: you’re not going to Atlantic City for exercises in self-control and moderation. But a Bally’s spokesperson told us to fear not.

“We will always have a supervisor on duty overseeing the self-serve wall,” says the spokesperson.

The only question I really have is, how long until we get a robot bartender that can actually make drinks without all the mustachioed hipster condescension, like this robot bartender in Las Vegas:

One can only dream.