Eagles Prepare for Off-Season Changes Following Their Loss in Tampa

“Never does a team look exactly the same as it did the year before,” says head coach Nick Sirianni after the team’s business trip to Florida didn’t go as planned. 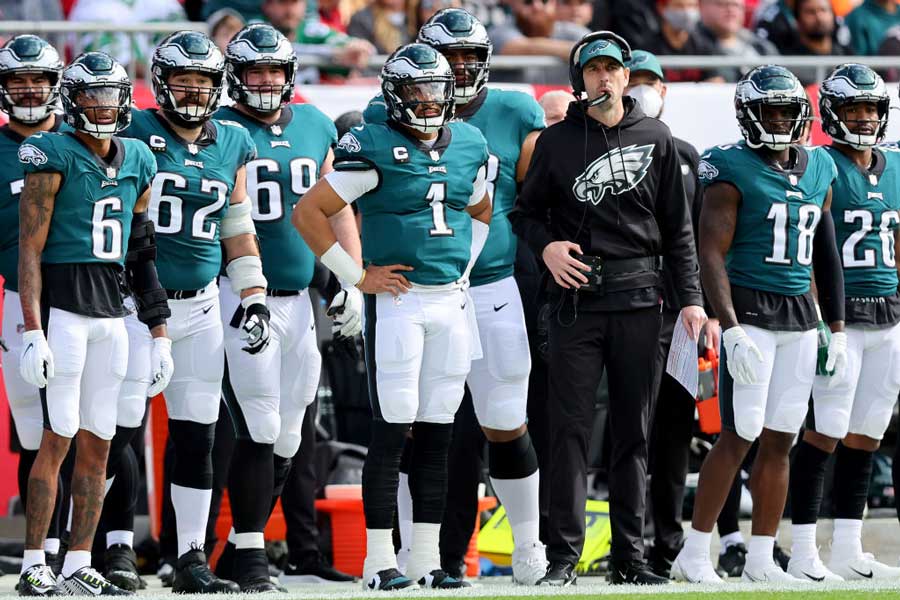 Jalen Hurts looks on with his teammates from the sidelines against the Tampa Bay Buccaneers during the first quarter in the NFC Wild Card Playoff game at Raymond James Stadium on January 16, 2022. / Photograph by Michael Reaves / Stringer via Getty Images

A disappointing 31-15 loss in Tampa on Sunday was just another teachable moment for Jalen Hurts — perhaps the last one of the 2021-22 season for the 23-year-old quarterback.

But the good news is Year Three of Hurts’s professional career started on Monday.

“My third year starts tomorrow,” Hurts said moments after finishing 23-of-43 for 258 yards, many of those in garbage time with two interceptions and a passer rating of 60.0 against the reigning Super Bowl champion Buccaneers.

Back in Philadelphia with his troublesome left ankle somewhat calmed down after Hurts was forced to wear a walking boot out of Central Florida, the Eagles’ on-field leader only doubled down on his sentiment.

“The desire to put the work in, to do the things we need to do to be a better team next year, we’re all on the same page,” Hurts said on Monday — a.k.a. cleanout day in the NFL, something that has turned virtual in the COVID-19 era. “We’ll be back. And that’s the mentality. We’ve kind of gotten our feet wet [in the playoffs]. It’s a situation where we’re going to learn from it. I know for me, I pride myself on learning from my mistakes.”

Everyone won’t be back, however. That’s the nature of the NFL.

“I have always appreciated about the football season that it’s a journey, and you have to appreciate the journey you went through together as a football team – the meetings, the practices, the training camp practices, the training camp up in New York against the Jets – just all the things that built us into the 2021 Eagles,” coach Nick Sirianni said before pivoting to the reality that the 2021-22 Eagles, like every team, is unique.

“You get sad and start to feel sad because it’s over,” Sirianni continued. “You’re so happy that the journey happened, and the relationships that were built, but it hurts, and it stings because that journey of the 2021 Eagles is over, and that team will never be the same again. There will be changes. Never does a team look exactly the same as it did the year before.”

Roster turnover is as inevitable as death and taxes in the NFL.

There are certain players who know they will be back and are under contract after performing at a high level best exemplified by the members of the 2018 draft class who received extensions like Jordan Mailata, Dallas Goedert and Josh Sweat. The highlights of the 2021 class like DeVonta Smith, Landon Dickerson and Milton Willims can also use ink and forget about the pencil when it comes to their plans.

Hurts is probably at 95 percent or greater to be the starting quarterback again come September, unless the Eagles can pull off a miracle and acquire a superstar like Russell Wilson or a legally rehabilitated Deshaun Watson, players who have not indicated they would waive no-trade clauses for Philadelphia even if the stars aligned.

“I pride myself on finding anything and everything that can be teachable in any moment,” Hurts explained while looking forward. “And taking that and growing from it. I think as a leader on this team, being who I am, has to be contagious, truly. I said it yesterday: My second year as a starter, it started [Monday].”

Perhaps Jason Kelce, 34, is the most notable question mark; the four-time All-Pro center and likely future Hall of Famer has indicated he’s taking everything year-by-year at this stage of his career.

There should also be notable changes on defense, especially in the secondary where three starters — cornerback Steve Nelson and safeties Rodney McLeod and Anthony Harris — are set to become free agents.

“My future here is unknown,” McLeod admitted. “This isn’t how I wanted it to end if this is the last time for me, but at the end of the day, I’m proud of my guys, proud of what we overcame this year and what we were able to do with this team. We were just appreciative of the moment and really cherishing the moment because this team will never be the same again, but I like how we fought, and I love those guys for continuing to fight all the way up until the end.”

Set to turn 32 in June with two ACL tears in recent seasons, McLeod is healthy again and not sure how long he wants to continue playing. But this season was not the end game for the veteran leader who has become a staple in the community.

“Just always grateful to have a job and looking forward to next year,” McLeod said. “Going into this offseason, attack it like I always do, get better, I’ll work on a lot of things, and I’m just happy I was able to make it out of this season healthy. I think that’s a huge step for me.”

Harris, a teammate of McLeod at the University of Virginia and now with the Eagles, is 30 and set to turn 31 early next season. He’ll be taking some time before plotting his next step.

“I always want to focus on trying to get some time with my family, take advantage of that opportunity there, take some time to get my body recovered, and focus on where I want to go in terms of physical training and things of that sort,” he explained. “Then let the free agency and stuff like that handle itself.”