Eagles Expect Richard Rodgers to Step Up as Tight End

The Eagles will look to a familiar face when it comes to replacing Tyree Jackson, who tore his ACL on Saturday night. 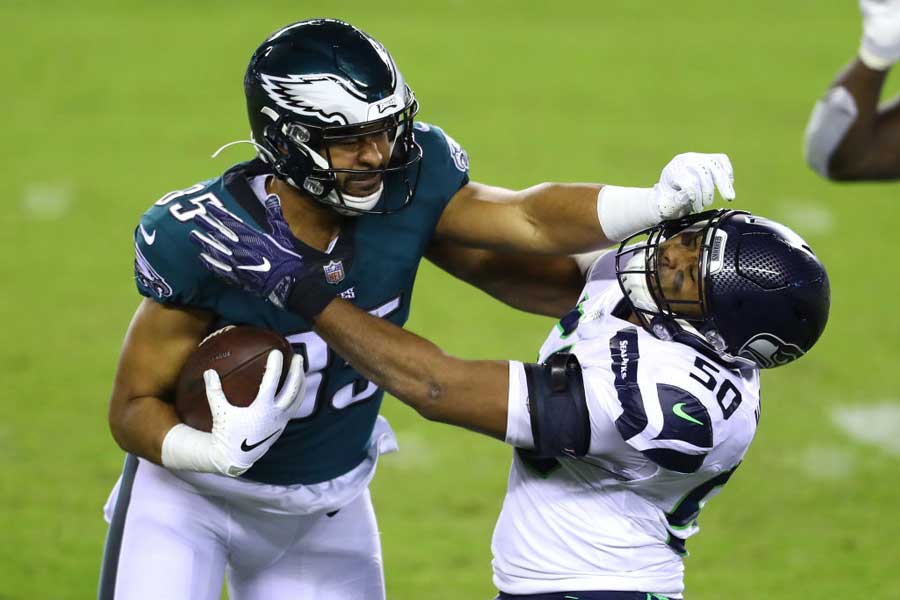 Richard Rodgers is tackled by K.J. Wright of the Seattle Seahawks during the third quarter at Lincoln Financial Field on November 30, 2020. / Photograph by Mitchell Leff / Stringer via Getty Images

The Eagles did their best to avoid injuries to key players by sacrificing the regular-season finale against Dallas on Saturday night, but there was at least some attrition, most notably to developmental tight end Tyree Jackson.

Jackson tore his ACL against the Cowboys, typically a nine-month injury that will curtail the offseason for what is considered by the franchise to be a solid developmental prospect with a significant upside.

The TE3 in Philadelphia is a bit more important than most offenses because of the Eagles’ run-heavy approach, but coach Nick Sirianni believes his team is well-stocked in advance of Sunday’s playoff encounter with the Super Bowl champion Tampa Bay Buccaneers.

Sirianni said that veteran Richard Rodgers would be elevated from the practice squad to replace Jackson against the Bucs.

“I think Richard Rodgers has done a good job every time he’s gotten an opportunity to play,” the coach said Monday. “He brings good veteran leadership. He brings great ability to block, not only in the first level but at the second level as well.

“And so he’ll be the one that’s elevated up and ready to go.”

Multi-tight end sets have become a big part of the Eagles’ offense as the 2021 season has progressed.

In the four games prior to the Cowboys outlier on Saturday, Philadelphia has used 12-personnel (two TEs) on 37.1% of its offensive snaps and 13P (three TEs) 16.2% of the time.

The Eagles also have second-year tight end Noah Togiai on their practice squad, but Rodgers is the easy choice for the postseason due to his experience with both the Eagles and Green Bay earlier in his career and, at least in the short-term, he might be able to help more than Jackson would have in Tampa against the battle-tested Bucs, the reigning Super Bowl champions.

The veteran has played in only three games this season with just two catches for 11 yards against the Cowboys in Week 18, but he’s played in 88 games in his professional career plus another 10 playoff games, including three with the Eagles in 2018-19.

Rodgers is expected to settle in behind Dallas Goedert and Jack Stoll against the Bucs, the Eagles’ top two TEs who missed Saturday night’s game while on the reserve/COVID-19 list.

Jackson, meanwhile, got his first NFL start against the Cowboys and snared his first professional catch for a touchdown, a short three-yard shovel pass from Gardner Minshew with 9:41 left in the first quarter, which gave Philadelphia an early 7-0 advantage.

Overall, Jackson played a career-high 39 snaps before injuring himself while covering a poor 24-yard Arryn Siposs punt early in the fourth quarter. He finished with three receptions for 22 yards on five targets.

Rodgers and Togiai, who were both elevated from the practice squad for Saturday night’s game, played 38 snaps and 24 snaps, respectively.

From a larger perspective, Sirianni believes his entire team will be ready for Tom Brady and the Buccaneers this weekend.

“… We’re going to prepare like crazy for this game. We’re going to have our same process that we’ve had throughout the entire year of trying to get a little bit better each day to give ourselves a chance to go 1-0. And we know how good of a team that Tampa is. That’s going to be typical through the playoffs. Everybody that you’re playing now has won their division or won enough games to get one of the three wildcard spots, so we know that every game from here on out is going to be a challenge.”