Eagles “Press on” Toward Playoffs

The Eagles took care of business against the hapless New York Giants Sunday and are trying to stay in the moment as the playoffs beckon. 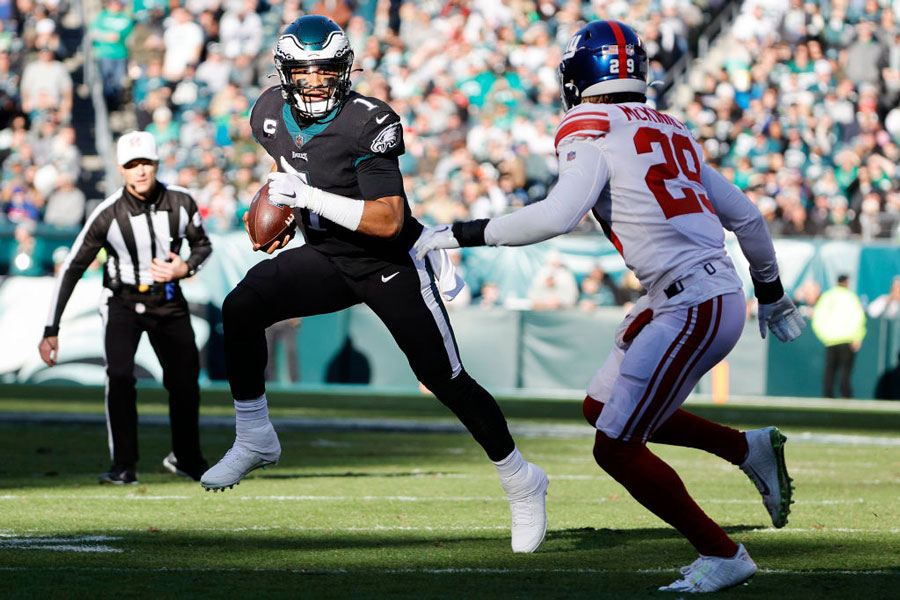 Jalen Hurts runs the ball as Xavier McKinney of the New York Giants looks to make the tackle during the second quarter at Lincoln Financial Field on December 26, 2021. / Photograph by Tim Nwachukwu / Staff via Getty Images

Nick Sirianni may be a first-year head coach but the Eagles’ mentor has been around the NFL for over a decade and he’s seen good seasons, bad years, and everything in between.

One lesson the 40-year-old coach learned along the way is that messaging can get stale in-season after players are hearing the same voice over and over again.

For Sirianni, three months was the demarcation line with the Eagles and the point he shifted toward team leaders in an effort to get the Eagles through what had been an unlikely playoff push. After a 34-10 win over the hapless New York Giants Sunday, unlikely has suddenly shifted to more likely than not with Philadelphia at 8-7 with two games to go.

Currently, the No. 7 and final seed on the NFC side of the bracket, the Eagles could clinch the spot early if they beat the Washington Football Team next week and get some help elsewhere.

“It’s been 12 weeks,” Sirianni explained when asked when he started looking to others to address the team before game day. “One through 12 weeks, I addressed them. They were probably tired of hearing my voice, so we changed it up.”

“That’s something I’ve done in the past. I’ve been on teams that have done that in the past. [Colts Head Coach] Frank [Reich] has done that, let your captains talk at the end of the year and get the guys ready to go on Saturday night. I’ve always had a good experience with that.”

All-Pro center Jason Kelce was the one who Sirianni tapped into before Sunday’s rout.

Leadership in the locker room is an important accent to any head coach and Sirianni is the rare rookie who was blessed with a core that reached Super Bowl LII and understands what it takes to win at the highest level in this league.

“I think, again, it just speaks to the leaders we have on this team and the fact that we knew adversity was going to come. That’s just the way this league is,” Sirianni noted. “Adversity hits, whether it’s a 2-5 start, a postponement of a game and having to play a game off a 13-day rest or whatever it was and then play a game off — I mean, that’s what happens in this league, so you try to prepare yourself for adversity and be able to handle it.”

“That’s the whole message we talked about from the beginning of just dog mentality, next play, next play.”

A little talent never hurt either.

“A ton of credit obviously to [Eagles Executive Vice President/General Manager] Howie [Roseman] and his staff of how they assembled this team,” Sirianni said. “I said to Howie in [the locker room] — Howie said, ‘Great job coming back from a 2-5 start.’ I said, ‘Howie, great job. Like what other first-year head coaches are in the position I’m in? We have a great offensive and defensive line.’”

“Usually when there is a new head coach, it’s because the offensive and defensive lines aren’t any good. So, it’s just been a great team effort.”

Against the Giants, the adversity meant rebounding from a slow start offensively and turning that into a 31-point second half, helped by the complement of the defense who set the offense up with a short field on two occasions and also contributed to the scoring with an Alex Singleton pick-six.

“I think we just stayed calm because the last thing you want to do is panic,” running back Boston Scott said. “You don’t want to get emotional. You don’t want to feel like you have to do anything over the top. We keep it calm and keep it focused.”

The leader of the calm-and-focused crew is quarterback Jalen Hurts, who struggled mightily early under finding a groove.

On brand, the Eagles’ even-tempered on-field leader didn’t want to talk about what’s in the rear-view mirror or where the GPS is programmed moving forward, cutting off a query about the postseason.

“I’m not in the business of talking about anything other than being in the moment,” Hurts said. “We know that as a football team if we control the things that we can control, we should be alright. “So, any external factors, any rat poison out there, I don’t really care for it.”

Sirianni, meanwhile, doesn’t care for style points. They’re nice the but the end game is all that matters.

“Good teams win games however they need to win games,” said Sirianni. “If we have to grind this out and be grimy and let the defense carry the weight the whole time, we’ll do it that way. But, hey, just have that next-play mentality.”

All that’s left now is to finish off that next play.