Business is Hardly Usual in the NFL This Week

The Eagles have no idea who the Washington Football Team will be showing up with on Sunday. 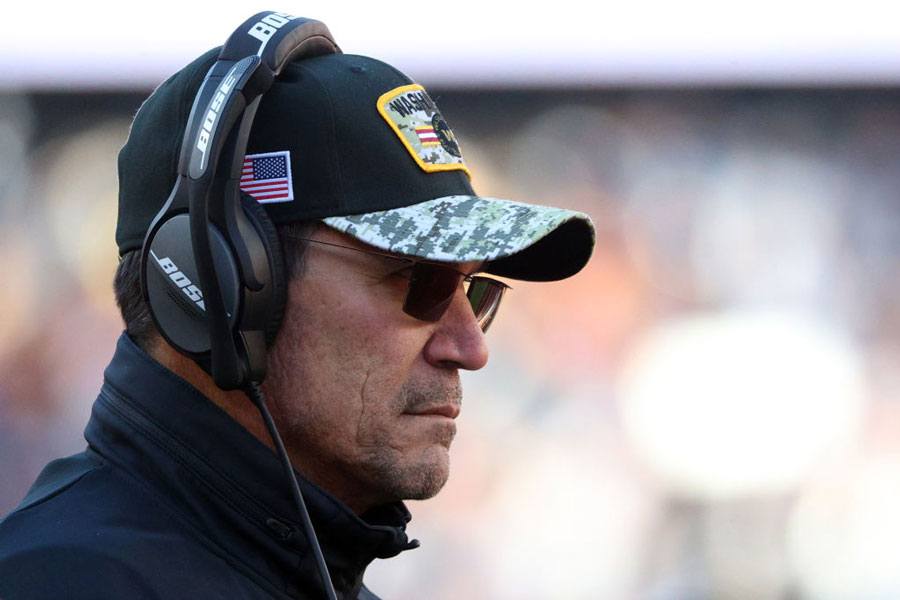 Head coach Ron Rivera of the Washington Football Team looks on against the Dallas Cowboys FedExField on December 12, 2021. / Photograph by Patrick Smith / Staff via Getty Images

The NFL tweaked a number of health and safety protocols Thursday in an effort to halt a spike in the number of COVID cases, the pandemic seemingly on the verge of turning into an endemic among the young and healthy. This includes several NFL teams like Washington, who is scheduled to play the Eagles at Lincoln Financial Field on Sunday.

By Thursday, 21 Washington Football Team players were on the reserve/COVID-19 list and by the end of the day, Ron Rivera’s team was trumped by the Los Angeles Rams, who now have 25 on their COVID list.

Most of the vaccinated players on the list league-wide have been completely asymptomatic and wouldn’t even know about the illness had they not been tested.

“A couple [of players] that I did talk to, just to check on, the first thing they said is ‘Coach, I felt fine. I’ve got no issues,’” Rivera said during a conference call with the Philadelphia media. “But you did test positive, so we’ve got to wait and follow the rules. Several of them are tremendously frustrated because they don’t feel anything … that was the hard part.”

Worried that the season could derail from both a health and competitive advantage standpoint, the NFL and the league’s Players Associations agreed to a path that could allow vaccinated, asymptomatic players back on the field in a quicker fashion.

NFL chief medical officer Allen Sills explained to reporters Wednesday that roughly two-thirds of the players placed on the league’s COVID-19 list in recent days were asymptomatic and even the ones who weren’t have described mild symptoms.

The recently identified omicron variant of the virus is living up to the early belief that it would spread more quickly but result in less severe outcomes than previous strains — something that would officially turn COVID-19 from pandemic to endemic and more like the seasonal flu.

Nothing would change with the unvaccinated who must stay away from team facilities for at least 10 days after a positive test.

“Based on expert advice, we will adjust the return-to-participation requirements for those who have recovered from COVID-19,” the league said in a statement. “All of these changes are grounded in our data and science-backed approach, with safety our number-one goal for the entire NFL community.”

The cynical might note that the data and the science championed by the league were also accompanied by the timing of the rash of positive tests potentially affecting the playoff picture and even the season itself.

For the WFT, the current status would mean it would have trouble even fielding a team for Sunday’s game and even if it could, certainly not a competitive one.

Both the Eagles and Washington are 6-7 with the latter holding the final playoff spot in the NFC entering Week 15. The status quo would have the WFT down 11 of its 22 projected starters against the Eagles, including star players like Jonathan Allen, Montez Sweat, and Kendall Fuller. Washington is also scheduled to be without backup quarterback Kyle Allen and is down to their fifth center, former Eagles practice-squad offensive lineman Jon Toth, due to both COVID and injuries.

The uncertainty is so great that both sides are preparing like they typically do.

“For the most part, we’ve changed nothing,” Rivera said. “We’re practicing the way we normally would. We’re going through the reps that we normally would. Unfortunately, we are meeting by Zoom. And we’re in the [intensive] protocols. So that’s probably the biggest difference. … We’ve had to move a few guys around and elevate a couple of guys, and we’ve plucked a couple of guys.”

“Other than that, hey, business as usual.”

“They’re all capable of doing things.”

Linebacker Alex Singleton looked to his own background as a once-lightly regarded undrafted free agent before turning into a tackling machine in 2020.

“The scariest guy is that next guy waiting [to play],” Singleton said. “You can prepare, you can watch a guy play for two or three years on film, you can learn a lot about that guy. When you have a guy that everyone thinks is just some player off the street, but usually they’ve been in the building, they’ve been around the NFL and it’s a guy that’s hungry to play. Those are the guys, you just give them an opportunity and usually, they show a spark.”