“Slay” Bells Are Ringing for Eagles Defense This Holiday Season

The Eagles’ Darius Slay is having his best season, and that’s saying something for the three-time Pro Bowl selection. 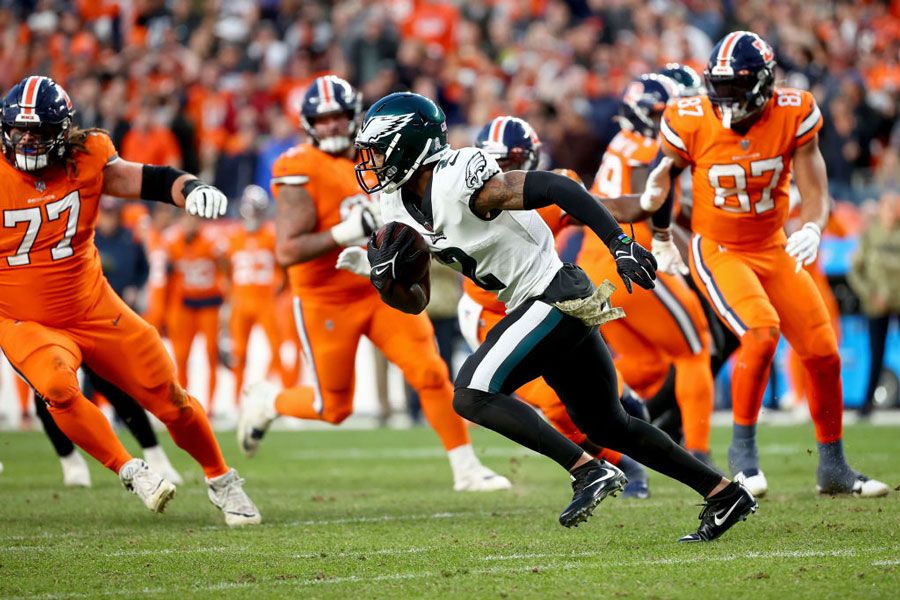 Darius Slay returns a fumble for a touchdown against the Denver Broncos at Empower Field at Mile High on November 14, 2021. / Photograph by Jamie Schwaberow / Stringer via Getty Images

Darius Slay is no stranger to NFL success.

The Veteran CB1 for the Eagles has been to three Pro Bowls over his eight professional seasons and was first-team All-Pro for Detroit in 2017.

Slay has never played better than he has this season for the Eagles with a fourth Pro Bowl nod assured and a second All-Pro selection likely.

“I should have no competition to get in,” Slay said Wednesday before the Eagles’ walkthrough practice. “I should be in with ease, but we’ll see how that goes. You know how this world is. It should be with ease because it’s by far one of my better seasons than I had with my other Pro Bowls.”

Slay has done it all in 2021 with consistency and splash plays. He’s No. 4 when it comes to Profootballfocus.com’s grading system behind only Atlanta stalwart A.J. Terrell, LA Rams star Jalen Ramsey, and Kansas City’s Rashad Fenton.

Where Slay has really gotten noticed with the more casual observers is with big plays, including three defensive touchdowns.

Slay found the nose for the end zone in his second home of Detroit when he took a fumble back for 33 yards against his old team. From there it was an 83-yard fumble return touchdown that essentially sealed a win in Denver and then a pick-six that helped the Eagles top New Orleans.

Overall Slay has three interceptions on the season with 72 tackles and PFF has graded him No. 1 over the last five weeks so he’s just getting stronger as the stretch run arrives.

The secret to Slay’s success might be his personality, perhaps the only thing bigger than the big-play ability he flashes on a weekly basis while often shadowing the opposition’s top receiver.

“I would never be too serious,” Slay joked. “It’s hard to be serious because it’s a kid’s game that a lot of grown men are playing, so I can’t be too serious, but I have a lot of fun. If I’m too serious I’m probably going to fight somebody then.

“I try to avoid that because that’s a big fine in my pocket, so I’m chilling having fun, competing, trying to do what I can to help the team win, so I’ll be out there laughing.”

“Man talks nonstop 24/7,” McLeod joked. “That’s what you know you are going to get from Slay. No matter what time of the day he’s consistent. I’ll say that so I love him.”

McLeod, though, also explained there is a serious side to Slay.

The corner loves to help the younger cornerbacks and also the receivers on the Eagles’ roster, and you don’t get to be as good as Slay is without an impressive work ethic.

“What I really see from Slay is his ability to not only worry about himself but worry about others and help others, too,” McLeod said. “Get them better. … He’s really taking him under his wing, and just pours into them everything that he knows about the game. And he shares a lot of information.”

“He doesn’t hold back and that’s one thing I like about him and just his work ethic. He shows up every single day, ready to compete, ready to get better, whether it’s during practice or after practice working on his craft, and that’s what has allowed him to be one of the best for a long time.”

First things first for Slay before the Pro Bowl.

The 6-7 Eagles host the 6-7 Washington Football Team on Sunday at Lincoln Financial Field in a game where the winner will greatly increase its odds for the postseason and the loser can start thinking about 2022.

“We’re locked in,” Slay insisted of the Eagles. “We knew that going into the bye. The thing I told my guys, no Louis (Vuitton) bags packed the week before we played the Jets. We good. We’re ready to go. We’re locked in. We know what’s at stake.

And once the postseason is secured then the Pro Bowl talk can commence.

“Of course, me and (Jalen) Ramsey [should go],” Slay smiled. “I like Marshawn. I like Lattimore. And of course (Trevon) Diggs right now. He’s got the hot hand right now, picking everything.”