If the Eagles can upgrade from Jalen Hurts in the coming months, they will. If the organization can’t, the young QB will be back for another season as the starting QB. 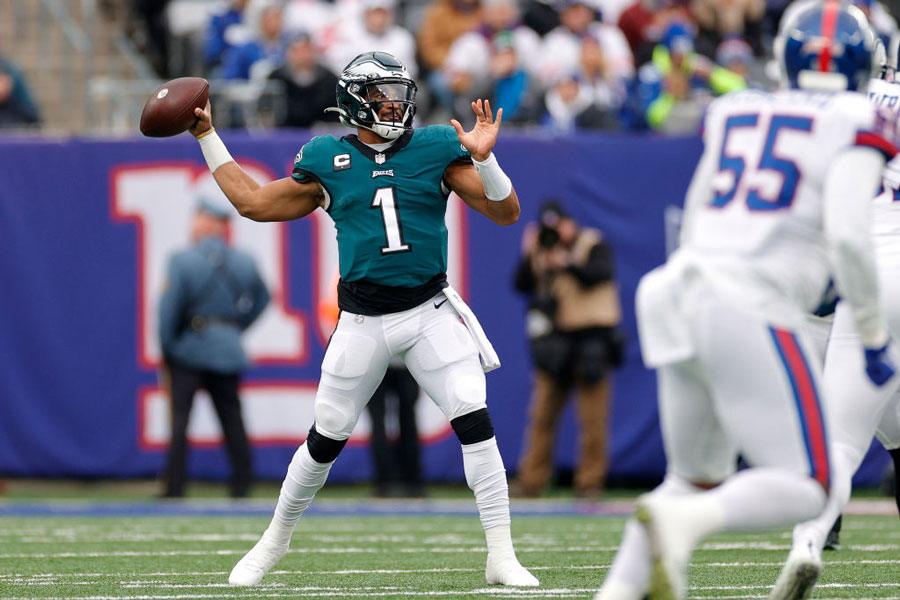 Jalen Hurts passes the ball in the first quarter against the New York Giants at MetLife Stadium on November 28, 2021. / Photograph by Sarah Stier / Staff via Getty Images

In another four games, Eagles’ quarterback Jalen Hurts will have a full season under his belt as an NFL starting quarterback, hopefully with only one hiccup, the ankle injury that kept him out of the pre-bye-week win over the New York Jets.

Hurts might even lead the Eagles to what was deemed a very unlikely postseason berth at the onset of the 2021 campaign with a strong finish to the season.

At that moment you’ve been told that Howie Roseman, Nick Sirianni and Co. will magically know what they have in their second-year quarterback and whether or not moving forward with Hurts will be the prudent path forward for the organization.

The truth is far simpler than that.

The Eagles already understand that they don’t know what 2022 will look like for them at the game’s most important position and what happens over the final month, barring the most unlikely of Super Bowl runs, isn’t about to change that uncertainty.

What the organization has ascertained is that Hurts doesn’t have the same ceiling as some of the other top-tier young QBs like Justin Herbert of the Los Angeles Chargers, who is probably the most well-regarded next-generation signal-caller around the league.

So while everyone else has been hand-wringing since the summer, turning Hurts vs. whomever into some kind of social-media cesspool of ad hominems, the Eagles have long understood the end game here: Upgrade if you can upgrade.

It was always the outsiders who were far too focused on the one season to judge what Hurts has, but there is no law on the books just yet in an admittedly overlegislated league that says a bridge QB can’t be used for a longer period.

Admittedly, the messaging has been contradictory to fans with certain reports claiming Jeffrey Lurie decreed that Hurts should be given the full 17 games and others insisting the owner gave Howie Roseman the greenlight to pursue embattled Houston superstar Deshaun Watson.

The devil is always in the details, and the real story is that Lurie wants the home run. If he can’t get it, he’s fine with a young player he likes and respects.

The cycle starts anew in the spring and the Eagles will try to improve. Sometimes you aren’t able to, however.

The organization has already tipped its hand to its thinking on Hurts in numerous ways, most notably the scaling back of the offense midseason to be more of a run-first team, something counterintuitive to the analytics-heavy approach Lurie champions for his organization, which acknowledges that the most likely way to consistent winning in the modern NFL stems from an explosive passing game.

Meanwhile, the Eagles were also already pushing pretty hard at times pre-trade deadline for Watson to change his mind when it comes to his no-trade clause and consider Philadelphia in the absolute worst of circumstances.

With fewer hurdles and potential civil litigation issues set aside when the trade market starts anew, the sentiment that the Eagles would no longer push Watson to reconsider the Eagles as a landing spot is a flawed one.

Another option is the Eagles’ so-called white whale, Russell Wilson, may be available via trade in the offseason. Similar rumors over the past offseason reached the point where Wilson’s agent, Mark Rodgers, put together a list of teams he would waive his own no-trade clause for, a group which also didn’t include the Eagles.

As far as the rookie draft class goes, that’s always about evaluation. If Andy Weidl and his scouting staff believe Pitt’s Kenny Pickett or Matt Corral of Ole Miss are future franchise signal-callers, Philadelphia will use its likely three first-round picks in an effort to get into position to take the player. If the Eagles don’t believe in the prospects, they won’t.

None of the aforementioned scenarios means you dislike the contingency plan put in place, which involves kicking the can down the road before the same question is asked in 2023: Can we upgrade at quarterback?

That’s what a meritocracy is and, occasionally, a superstar will force an organization to press pause for a bit. But even the most fervent Hurts fans have to acknowledge the Eagles’ current QB1 doesn’t belong in that club.

For those who claim it’s best to build up the defense or add playmakers around a competent quarterback, it’s time to simplify the thinking process even further and stop overlooking the obvious.

It never makes sense to eschew an upgrade at the game’s most important position if you can pull it off.