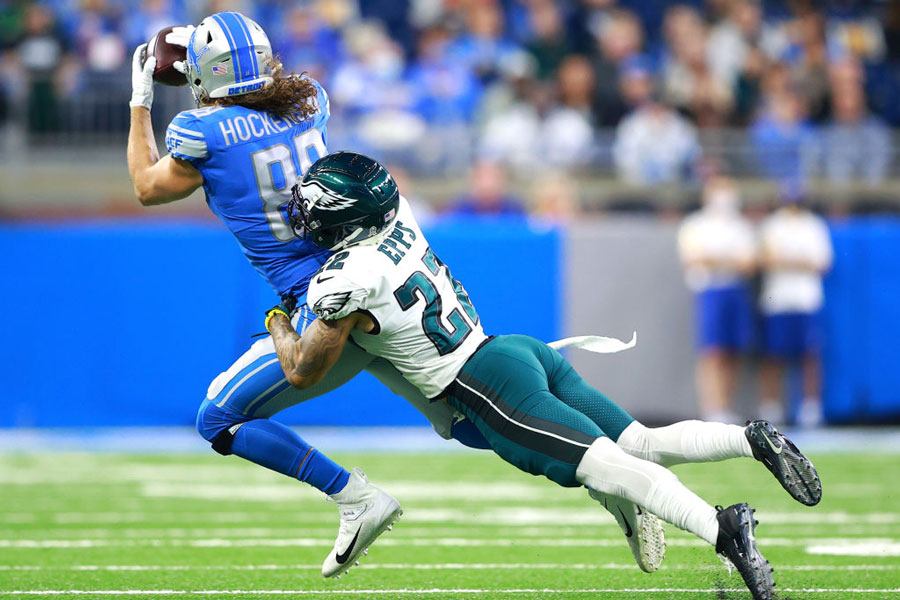 Whether it’s Marcus Epps playing “winning football” on the back end or rookie cornerback Zech McPhearson filling in for a banged-up Steve Nelson at cornerback, some of the young Eagles defensive backs are starting to catch on when it comes to what Jonathan Gannon is trying to accomplish.

Epps, the Eagles’ third safety, has become an integral part of Gannon’s defense the old-fashioned way: Earning it.

The 25-year-old was claimed off waivers from Minnesota when he was a rookie in 2019 and quickly flashed the natural instincts to play as a single-high safety to the former defensive coaching staff led by Jim Schwartz.

By 2020, Epps was ready to play fill-in when Rodney McLeod went down with a torn ACL and managed two interceptions, victimizing Kyler Murray and Alex Smith, in a career-high 363 defensive snaps.

The Eagles understood McLeod wouldn’t be ready for the start of the 2021 campaign while rehabbing his torn ACL and at least penciled in 2020 fourth-round pick K’Von Wallace as the fill-in next to free-agent signing Anthony Harris.

Much of that was about fit because Harris’ strength is coverage, the same as Epps, and Wallace figured to be more of a box safety. While injuries contributed, Epps lapped Wallace by Week 3 and became a reliable placeholder for both veteran safeties.

When McLeod returned to the lineup, Epps was then forced to fill in for Harris when the veteran center fielder was dealing with multiple injuries and missed consecutive games at Las Vegas and at Detroit. Through it all, Epps proved to Gannon that he deserved some kind of presence even when both McLeod and Harris were available.

To date, Epps has already trumped that previous career-best by playing 424 snaps and has matched his career-best with 49 tackles, adding four pass breakups and an interception of the Jets’ Zach Wilson during a 33-18 win this past Sunday.

“I mean from a mental standpoint, from a physical-trait standpoint, the toughness that he brings to the defense, the athleticism, the ball skills, the tackling, the run-the-show, you know — as much as [CB] Avonte [Maddox], as we put on Avonte, we put on those safeties too, with the style we play,” Gannon said when discussing Epps. “You might think, ‘What do you mean by the ‘style you play?’ You’ve got a couple of coverages.’ There’s a lot that goes into the coverages by certain things.”

“We put a lot on [Epps’] plate and he handles it. He’s another one like Avonte, very positive when it’s not going his way or our way, it’s on to the next play. He has a very next-play mentality that the head coach preaches. And he’ll continue to play for us because he’s playing winning football.”

“Winning football” has been met as best evidenced by ProFootballFocus.com, which has graded Epps as No. 21 of the 91 safeties who’ve played enough to be rated. More so, he’s top-10 in run support, which is supposed to be Epps’ weakness as a player. Conversely, the starters, McLeod (No. 72) and Harris (No. 74) have struggled at times for Gannon.

As for McPhearson, the Eagles have been lucky not to have needed the rookie fourth-round pick all that much because the starters on the outside, Darius Slay and Steve Nelson, have played well with the former playing an All-Pro level.

Recently, though, Slay has needed some time off in-game with hamstring and concussion issues, while Nelson was removed with a shoulder injury against the Jets. McPhearson was the next man up in both scenarios.

The results weren’t great when McPhearson had to play at first, but got better last week — always a positive with rookies who are being tested for the first time.

“With Zech, he came in and played because Steven got nicked. I really thought he made a big-time improvement this week, as far as just his eye discipline, his alignments, made a couple plays,” Gannon said. “… I think he did a really good job of the snaps that he played, he did a good job for us.”

“You always hear me talk about, especially for young guys, game reps are the most critical, the most valuable thing for a young guy, even more so than practice reps because, when you do make mistakes in a game, that’s the best form of learning in my opinion. You don’t want to make a lot of mistakes, but he’s doing a good job of not making the same mistake multiple times and he’s playing well.”