The Eagles’ DeVonta Smith already has his spot in the Heisman House. He’s hoping to be joined by another Alabama star this weekend. 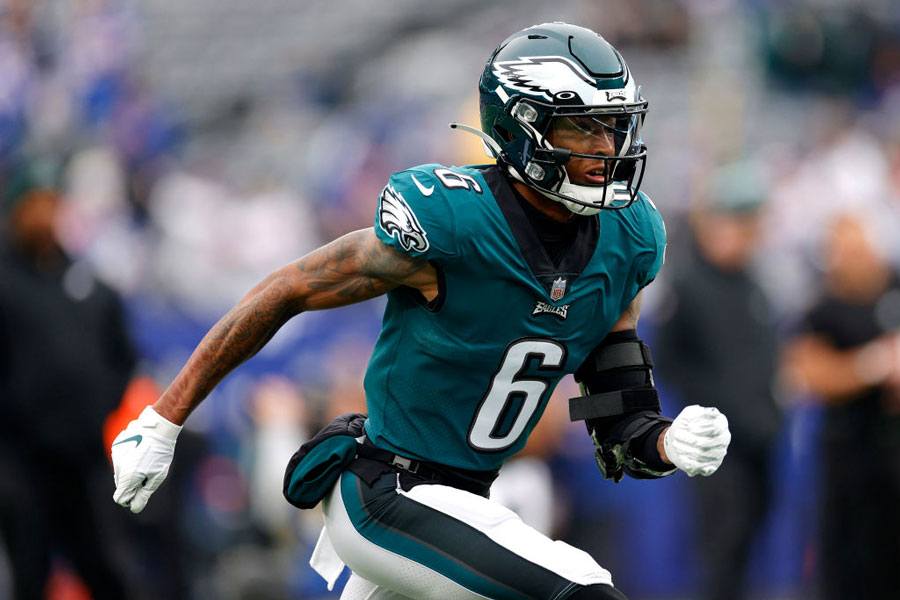 DeVonta Smith warms up before the game against the New York Giants at MetLife Stadium on November 28, 2021. / Photograph by Sarah Stier / Staff via Getty Images

We are in the midst of the Eagles’ bye week, something that has become more of a staycation than vacation for many NFL players in the COVID-19 era.

DeVonta Smith is one Philadelphia player getting away over the weekend, but the rookie receiver isn’t going far, just up the New Jersey Turnpike for the third consecutive weekend. This time, however, it’s not MetLife Stadium to face the Giants or the Jets, it’s the Downtown Athletic Club in New York City to hand the baton to the 2021 Heisman Trophy winner.

Smith, the 2020 Heisman winner after his historic season at Alabama in which he piled up 117 receptions for 1,856 yards and 23 touchdowns, confirmed that he planned to attend the Saturday ceremony last week, something that wouldn’t have been difficult if the Eagles were on the schedule this weekend.

The finalists for what is essentially the MVP award at the college level were released Monday and include three quarterbacks: Pitt’s Kenny Pickett, Ohio State’s C.J. Stroud, and the Crimson Tide’s Bryce Young, plus a defensive player in Michigan’s Aidan Hutchinson.

“It’s just a blessing [to be a finalist],” said Smith, who ended up in Philadelphia as the No. 10 overall pick in the 2021 NFL Draft. “Whoever it is, those guys who are finalists, just knowing they’ve been working hard to get to that point. When you work as hard as those guys are working, and you get there, it’s just like you know that you’re doing everything the right way, and the way things are supposed to be done.”

Smith, though, wasn’t shy in expressing who he hoped would be following in his footsteps, the latest Alabama superstar in Young, who was spectacular in last week’s SEC title game in which the Tide routed favored Georgia.

Last year, Smith became the first WR to win the award in nearly 30 years. Michigan’s Desmond Howard was honored in 1991 but was also a dynamic kick returner, which added to his resume.

“I would say it’s pretty hard just because everybody pretty much labels it as a quarterback award,” Smith said of his rise to the top of the college football world. “The next person would probably be a running back or something like that. So, I mean, just for a receiver or anyone like that, it’s hard.”

“If you’re a receiver and you’re going to win it, then your quarterback has to be doing something right, too. So, it’s hard to win it as a receiver.”

Mac Jones was Smith’s QB at Alabama and he was a finalist for the award as well, joining QBs Trevor Lawrence and Kyle Trask.

Having two Crimson Tide players in the final four did split some votes, with Smith winning the award with 66.81% of the possible total vote, the lowest number since yet another Alabama player, running back Derrick Henry, won in 2015 with 65.73%.

Lawrence, of course, ended up as the No. 1 overall pick in the 2021 draft by Jacksonville while Jones was selected No. 15 to New England where he has become a starter for what is the top-seeded team in the AFC right now. Trask was a second-round pick by the reigning Super Bowl champion Tampa Bay Buccaneers where he is one of the backups for the legendary Tom Brady.

Through 13 games of his rookie season with the Eagles, Smith has been the team’s top wideout by far with 50 receptions for 701 yards and four touchdowns although he’s struggled the past two weeks against the Giants and Jets, hauling in just four catches for 37 yards in the back-to-back trips to East Rutherford, NJ.

Against the Jets Smith’s playing time was scaled back to 44 snaps as Nick Sirianni played more 12- (two tight ends) and 13- (three TEs) personnel.