What Jalen Hurts Can Learn from ‘Minshew Mania’

The Eagles' backup quarterback was lights out in a 33-18 win over the New York Jets, and there are lessons to be learned from the performance. 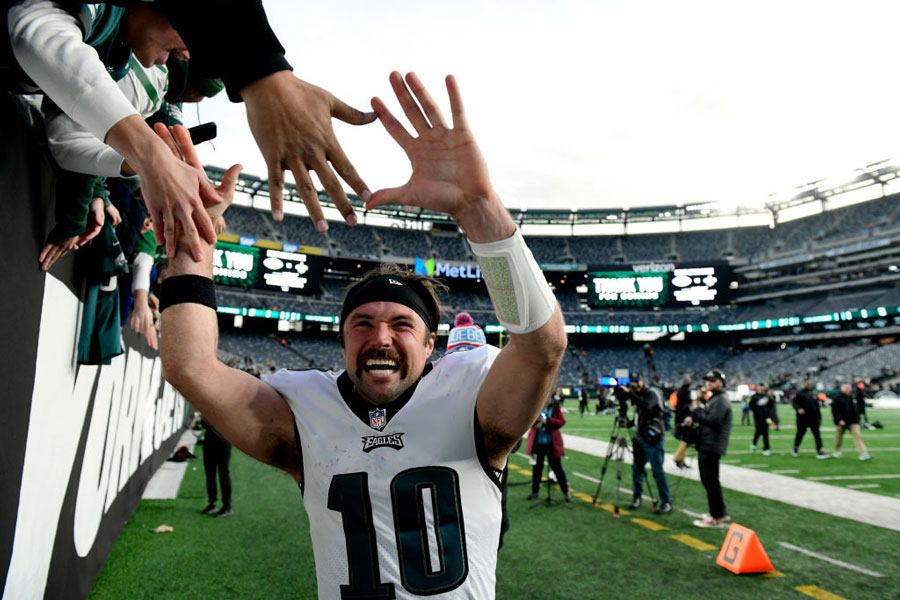 Gardner Minshew celebrates as he runs off the field after defeating the New York Jets 33-18 at MetLife Stadium on December 5th, 2021. / Photograph by Steven Ryan / Stringer via Getty Images

Eagles quarterback Gardner Minshew was celebrating with just over a minute gone in the second quarter at MetLife Stadium. Philadelphia’s backup quarterback had just thrown his second consecutive touchdown pass to Dallas Goedert in what was shaping up to be an unlikely shootout with the hapless New York Jets.

Waiting to greet the most charismatic dude since the Big Lebowski himself on the sideline was QB1 Jalen Hurts, who is nursing an ankle injury. After a brief celebration, the two QBs went back to work exchanging information on a Jets defense that wasn’t up to snuff in the 33-18 Eagles victory.

Hurts wanted to play Sunday, but the decision was taken out of the second-year player’s hands by the Eagles’ medical and training staffs.

Minshew ran the passing offense with more efficiency, and there are many factors that play into that, including the competition level (which won’t be mistaken for the 1985 Chicago Bears any time soon).

That said, Minshew, who hadn’t started a game all season after being acquired in late August from Jacksonville, seemed comfortable letting Sirianni’s offense work for him. He trusted his reads, got the football out of his hands quickly, and generated impactful touches for players who had been forgotten about in recent weeks, like Quez Watkins and Kenny Gainwell.

Sirianni was asked why his passing offense looked better to the naked eye.

“Obviously, it always starts up front and how the protection is going. I thought the protection was awesome,” the coach noted. “Not to take anything away from Gardner. He played a great game. He got the ball to the backs on check-downs when there wasn’t something there. He hit some chunks in the pass game. He had a couple to Quez on those deep overs. I thought he played a really good game.”

The type of game Hurts can learn something from?

“Everybody is going to learn from the game,” Sirianni said. “Jalen is going to watch. You take every opportunity you have as a player and you learn and you watch the position. I’ll say Deon Cain, a practice squad receiver, and KeeSean Johnson, a practice squad receiver, they’re going to learn from anything that happened in that game today. Good or bad. The same thing goes for Jalen and the same thing goes for Gardner when Jalen was playing.

“Good or bad, you get to learn from that opportunity. That’s a part of how you get better every single day. A big component of getting better every day is the detail in meetings and the film study. That is such a big component of what we do. Our guys, our coaches, we’re visual. To be able to put on the tape and praise the good things and correct the bad things, I get so excited about that in this game. Every little correction or every little praise is getting the behavior how you wanted or getting the play how you want it. Not only Jalen is going to learn from that, but [third-string QB] Reid [Sinnett] is going to learn from that.”

Asked to drill down on specifics Sirianni seemed to hesitate a bit, not wanting to intimate Minshew did certain things better than his starter.

“When you’re making a check on a play. It’s really anything. I guess I wasn’t clear there,” Sirianni stammered. “It’s a check on this play. Oh, that was a good check. A step up with two hands in the pocket on this play and feeling the defender behind him when he laces it to Quez. It can be anything.”

What fans need to learn is that there is a different kind of protection going on there with Hurts and there is no QB controversy in Philadelphia with four games left to play and the team one-half game out of the NFC playoff picture entering the late bye week.

That, of course, left a little wiggle room.

“I don’t want to put timetables on anybody,” said Sirianni. “You just have to see how the body heals and how the body reacts to everything, but I would think [he would be back after the bye week]. The bye is coming at the right time for us. We’ve got to get a lot of guys back to peak performance with some of the bumps and bruises that we had today. This is a late bye and I would think Jalen will be ready coming out of this.”

“I thought he was great,” Sirianni explained. “He knows his body too. Obviously, the competitor in him wants to play. I’m not saying he was fighting us in there to get out there, but he would have probably just knowing Jalen. He was great there on the sidelines with his teammates just being there for his teammates, high-fiving, smiling. It was good to see him support. That’s what a leader does. That’s what a starting quarterback does when he’s not playing. I appreciate the way he went about his business today.”

And so did Minshew.

“I thought Jalen did a good job,” Minshew said. “He’s over there helping me when he could. I think he’s sitting back learning when he can. It’s big. I’ve been in that situation where it’s really a good opportunity to sit back and see things from a different perspective, and I think it was awesome having him there today.”