Offensive Imbalance Was Working for the Eagles

It's counterintuitive to steer away from offensive balance but the Eagles' personnel is set up for that right now. 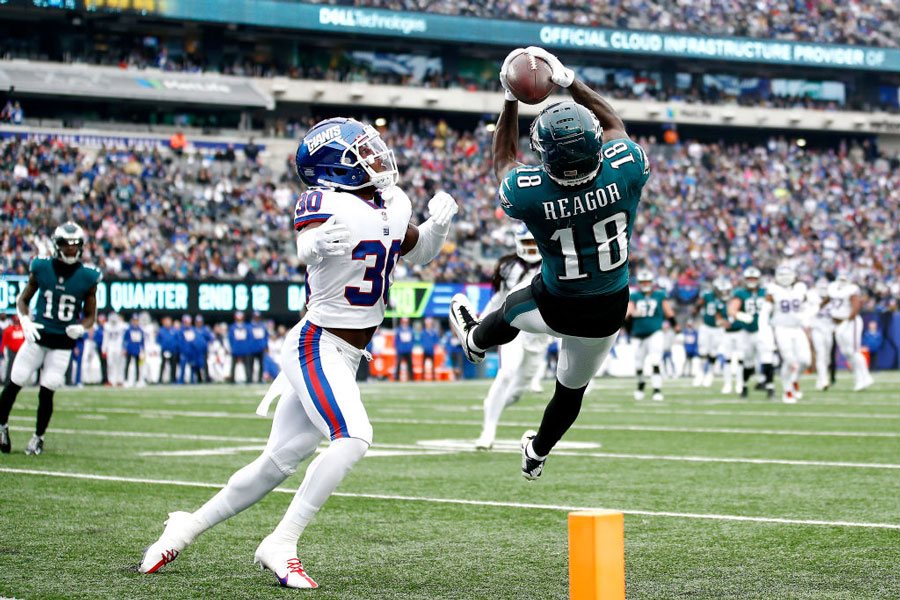 Jalen Reagor makes a first down catch against Darnay Holmes of the New York Giants at MetLife Stadium on November 28, 2021. / Photograph by Sarah Stier / Staff via Getty Images

After an ugly loss in Las Vegas, the Eagles’ offense changed.

That’s evident by the demarcation line Sin City provided. Over the first seven games of the season, including Vegas, Jalen Hurts threw the football at least 30 times on five occasions, with the apex a mind-numbing 48 passes against Kansas City and the low-water mark 23 in Week 2 against San Francisco.

Post-Vegas Hurts has only thrown 30 times once, in Sunday’s 13-7 loss to the New York Giants, and that number was only hit out of desperation, with the Eagles going to the air seven consecutive times on the final drive to try to pull out an unlikely win.

In Philadelphia’s three wins since the Raiders game, Hurts tossed the football 14, 23, and 24 times. The two setbacks were 17 against the LA Chargers and the outlier vs. the Giants.

Because of the scaled-back passing attack, part of the game-planning began to revolve heavily around two players, something Nick Sirianni admitted earlier this week.

“Definitely when you put the ball in the air you definitely always want it to start with 88 [Dallas Goedert] and 6 [DeVonta Smith],” the coach explained. “That’s definitely been our priority.”

And that’s what really changed against the NYG. Of the 29 targets, only seven were to Goedert and Smith.

“That doesn’t always mean it’s going to happen that way. You can’t just tell the quarterback to force-feed it there no matter what,” Sirianni explained.

The Eagles’ lesser options did not deliver, especially embattled receiver Jalen Reagor, who had two chances late in the game and dropped them both, sparking questions as to why Hurts didn’t rely on more proven commodities in such a big spot.

The fact that Smith may have been as open on the final offensive play as some critics think and Hurts didn’t pull the trigger, instead delivering a well-thrown pass to Regaor at the Giants’ 1-yard line, resulting in a drop, only upped the angst.

Remember that critics don’t really judge play-calling or even decision-making—whether they understand it or not, their real measurement is the result.

In other words, it’s hard for many to understand that a good call or decision could provide a negative result due to a lack of execution.

On the final offensive play, the progression was Smith and then Goedert before things broke down into essentially a scramble drill.

“We ran a shallow cross-play where DeVonta was the first read in that play. As a matter of fact, on that play, too, DeVonta is 1A and then you could say Dallas is 1B,” said Sirianni. “The defense that they played eliminated the 1B read of Dallas and put it onto DeVonta.”

From there the execution was lacking with Smith and fellow receiver Quez Watkins.

“We didn’t do a great job executing the route discipline out of that play with DeVonta and Quez, but it turned into a scramble, and we got an open look,” Sirianni noted. “Jalen made a good throw. Like I said, want to just be able to finish that play off. Again, no one wants to make that play more than Jalen [Reagor].”

When it came to the game plan overall, however, it did seem that Sirianni wanted the passing game to evolve at least a little bit against what seemed to be a lesser opponent.

Perhaps a little too balanced considering the miscues of Reagor in the waning seconds.

Another lesson learned by a young coach, but this one may prove costly when it comes to the final playoff spot in the NFC.

“Everything we do starts with those guys. I’ll take responsibility for them not getting the touches that they needed [against the Giants] because that’s my job to see everything and adjust as the team is playing us,” Sirianni said. “They kind of did some different things near the end of the game that they had shown, but any time you don’t get the ball to those guys the way you want to, I’ll always take the blame on that first.”