From Affable Aussie to Nasty Bodyguard: The Evolution of Jordan Mailata

The Eagles left tackle took up residence at the International House of Pancakes last Sunday after a big win against New Orleans. 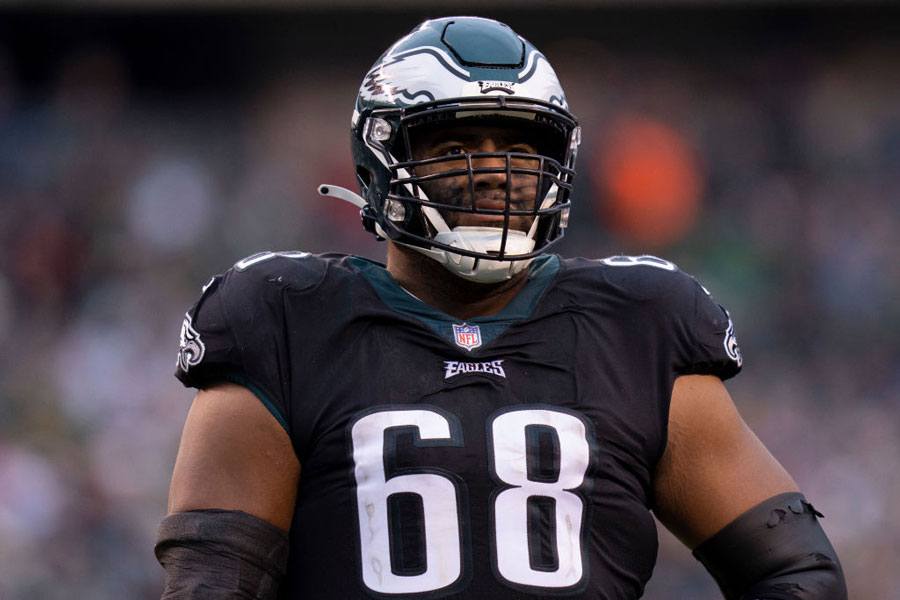 Jordan Mailata looks on against the New Orleans Saints at Lincoln Financial Field on November 21, 2021. / Photograph by Mitchell Leff / Contributor via Getty Images

When you want to protect the family it’s nice to have a 6-foot-8, 380-pound bodyguard.

Mailata and Davenport even got into a bit of a scrum, something not unfamiliar to Mailata, an ex-rugby player in his native Australia.

There were no flags on the play but plenty of lingering discontent as the big man ended on top of the duel, something that led to some pushing and shoving when the two players were finally untangled.

As the “winner,” Mailata took a bit of a victory lap on social media, changing the location of his Instagram account to IHOP – the International House of Pancakes.

Pancake blocks, of course, is what every NFL offensive lineman strives for.

“I was being cheeky, that’s all that was,” Mailata smiled before a walkthrough practice on Wednesday.

That cheekiness quickly ended, however, when Mailata talked about the way Davenport went about his business.

“The biggest thing for me was all the extra stuff (Davenport) was doing to Jalen,” said Mailata. “I’m a big boy, I can handle myself, but I think seeing him getting pushed out of bounds and even when Jalen’s breaking the pockets and he’s throwing the ball, he’s getting hit late by No. 92.”

“… So, for me it kind of built up. The frustration was, once I get an opportunity, I’m going to do something to this dude. It just so happened that play he lined up against me, I got the right footwork, got the right leverage, and just kind of wanted to finish him into the ground.”

“I just remember them being so dirty after plays last year,” Mailata noted. “For me, I wanted to set the tone early and that’s why I was the way I was on Sunday because I wasn’t going to let that fly again this year.”

A natural leader, Hurts has sparked incredible loyalty from his teammates.

“For me, it’s protecting my family,” Mailata explained. “I told you guys this last week, all these guys on the team are my family. So, for me, protecting my family is what made me do that…seeing my brother get hit, getting pushed out of bounds late, it didn’t roll right with me.”

Mailata has evolved from seventh-round project into a franchise left tackle in less than four years and with it, the uncertainty of trying a new sport in a foreign country has turned into a self-assured second nature for Mailata.

“The key is you can’t be so confident where you don’t realize you still have room to grow.”